Completed in 1902, for General Charles Lane Fitzhugh (1838-1923) and his wife Emma Shoenberger (1842-1923), grand-daughter of Peter Shoenberger (1782-1854) the “Iron King” of Pennsylvania. This house was both named and styled on another Fitzhugh property, Ravensworth Plantation in Virginia. Built when Cobourg was known as the “Newport of the North,” this elegant 28-room, neo-classical gem is still a private home and still enjoys an uninterrupted view over Lake Ontario. Its owners have included a winner of the Kentucky Derby and a recipient of the Victoria Cross – one of whom was nearly assassinated here and the perpetrator never found....
zoom_in 5 images 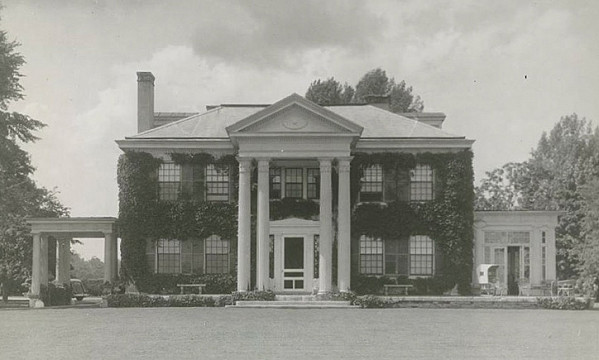 Charles Fitzhugh's ancestor, Colonel William Fitzhugh (1651-1701), owned 54,000 acres in Virginia and had five sons from whom he counts a numerous progeny. Charles was born in New York, but among his immediate family he counted the Lees of Stratford Hall and the Carrolls of Doughoregan Manor. He distinguished himself in the Civil War as the youngest Brigadier-General in the Union Cavalry, pitted against many of his own family.
When peace was declared, the General went into the iron and steel business at Pittsburgh with his father-in-law, George Krug Shoenberger (1809-1892) of Scarlet Oaks. Initially, he was attracted to Cobourg for its commercial value in steel and iron, but Fitzhugh, his father-in-law and brother-in-law, William Parham Chambliss (1823-1887), became quite enchanted with its natural beauty. Between them, they successfully marketed Cobourg as a summer resort for Pennsylvanian millionaires, known as the “Newport of the North”.
Developing the "Newport of the North"

Fitzhugh wished to build a summer home for himself, but he was equally desirous that his two sons would also summer in Cobourg. He purchased Northumberland Hall for one and built East House for the other. For himself, Fitzhugh purchased over 100-acres to the east of Cobourg, once the property of Captain The Hon. Walter Boswell (1770-1846) R.N. His estate extended north to the highway, east to the old rifle range, south to the lake and west to the end of Lakeshore Road. He sighted his new house directly across the lake from Rochester, New York, which was - perhaps not coincidentally - developed in 1803 by both of Fitzhugh's’s grandfathers, Colonel William Fitzhugh and Major Charles Carroll.
Fitzhugh's Ravensworth

Designed by architects Elzner & Anderson in Cincinnati, Fitzhugh both named and modelled his 28-room mansion on the Ravensworth Plantation in Virginia, built in 1797 as a country home for a distant relative William Fitzhugh (1741-1809). It’s said that the General came to know the plantation during the Civil War when he was billeted there.
Ravensworth sits on 4.5 acres of landscaped parkland, surrounded by mature trees. The property is approached by a long tree-lined drive that finishes in a large circular gravel driveway in front of the west side of the house. The south facing façade looks on to the lake and has an uninterrupted view over the water. In the General’s time, he planted a topiary maze in front of the house while behind he kept the land in pasture for his horses. Somewhere off the drive was a small lane that once led through the woods and across to Carroll Fitzhugh’s East House.
Between their two houses, the Fitzhughs employed upwards of 20-servants and an even greater team of gardeners whose duties included keeping the gravel walkways raked. On the estate, the General also built a large white guesthouse, a coach house and a small frame cottage for the head gardener. The coach house was later converted into the Carriage House. Rumour has it that after several years of listening every evening to her servants singing their gospel songs from the third floor - harmonious as they were - Mrs Fitzhugh considered that it might be more conducive for everyone if they had their own space!
In style, the brick and white stuccoed house is typical American Colonial Revival. The façade, with its two-story Corinthian columns supporting the ornamented pediment, is similar to Ravensworth Plantation that burned down in 1926. The centre block is flanked on the east side by the Doric pillared sun room and on the west by the similarly styled porte-cochere over the entrance. Either side of the main door are two large, period carriage lanterns.
Inside, the house is loosely built around a “centre-hall plan,” typical among many 18th century colonial houses that followed the then fashionable English style. The walls in the dining room are still inlaid with the Fitzhugh’s French tapestries and below is a cellar that was capable of stocking 700 bottles of wine. During Prohibition, rum runners were frequently seen anchored off the shore!
Richard Hickman & the attempt on his life

General Fitzhugh died in 1923, followed by his wife just one month later. The Ravensworth estate was left to their two sons, (William) Henry Fitzhugh (1867-1953) and Carroll Hamilton Fitzhugh (1876-1966). The brothers rented the house to Richard Baylor Hickman (1865-1949) and his wife, Stannye Ormsby (d.1936).
Hickman was an old friend of Harry Fitzhugh’s from Louisville, Kentucky, where they both bred racehorses. The Hickmans lived at Glenview Farms, a 3,500-acre estate that today comprises the City of Northfield and one of their horses won the famed Kentucky Derby. Hickman County, Kentucky - once known to explorers as the “Iron Banks” - was named for a relative and Hickman himself was President of the Ewald Iron Co. In 1926, the Hickmans bought Ravensworth.
In 1927, the Hickmans carried out renovations across the estate, including fitting the wrought iron fence that they brought from their farm in Kentucky. Aside from the main house, Hickman restored two other properties: The White Cottage for his daughter, Mary Lee Hickman and her husband General Charles School Blakely (1880-1975); and the Carriage House which was divided into two houses. One side was occupied by Mary’s sister Helen Courteney Hickman (1891-1954) and her husband Clifton Rodes (1888-1962). The other side was occupied by the Hickman’s gardener and cook: Augustus F. Peasley, a retired British soldier, and his wife Kathleen W. Peasley, “well-known for her wonderful cooking”.
On a previous trip to England, Hickman had visited a 17th century country mansion, the drawing room of which he so admired that he had an exact replica made for the library at Ravensworth. It took two craftsmen from Europe a whole year to complete and in order to authenticate it the doorways had to be lowered by two feet. At the Royal Ontario Museum, W. Garfield Weston (1898-1978) donated another 17th century room that is very similar to the one at Ravensworth.
Richard Hickman’s tenure at Ravensworth is marked by the attempt made on his life: One summer evening, he was quietly reading a book in his library when out of nowhere a bullet hissed past him and slammed into the panelling three inches from his head. Hickman and his staff scoured the grounds but found no-one. The following morning, he discovered that his would-be murderer had entered the library overnight and removed the bullet. No trace of man nor bullet survive.
Colonel Foote V.C.

Hickman died in 1949 and left Ravensworth to his two daughters. In 1952, “with great regret” his daughters sold the estate to Colonel John Weir Foote (1904-1988), V.C., the celebrated padre who was awarded the Victoria Cross – the most revered of all medals - for outstanding bravery during the Normandy Landings at Dieppe in 1942. Foote was later elected a cabinet minister in the government of The Hon. Leslie Miscampbell Frost (1895-1973), “The Old Man of Ontario”.
Mikels, Peters' & Ravensworth today

Soon after the purchase, Colonel Foote separated both the White Cottage and the Carriage House from the estate and sold them off individually. Ten years later, the original purchasers of the White Cottage - Dr Donald Edward Mikel (1923-1996) M.D., and his wife Yvonne Gwendolyn Dixon - swapped their home with the Colonel and became the new owners of Ravensworth in 1962. The Mikels son, Rob Mikel, grew up here and the house ignited his passion for local history. He is well-known as the definitive authority on Cobourg’s Gilded Age and old houses.
In 1973, Dr and Mrs Mikel sold Ravensworth to a Mr and Mrs Lewis Peters of Toronto who seemingly remained there for ten years. Since then it’s unclear who else has lived here. It was last on the market in 2006 and remains a private home

Of Iron and Ozone: The History and Residents of the American Summer Colony in Cobourg By Marsha Ann Tate

Murder in the Family: The Dr. King Story By Dan Buchanan