Built in 1539, for the wool merchant and Mayor of Northampton, Lawrence Washington (1500-1583), and his wife Ann Pargiter (1504-1564), the great-x5 grandparents of the 1st President of the United States, George Washington of Mount Vernon, Virginia. Sitting on an estate of over a thousand acres which included the Rectory of Stuchbury, the President's great-great-grandfather, Lawrence, was born in the manor in 1602. Three years after the President's line settled in Virginia in 1656, Sulgrave was sold out of their family. In 1911, Theodore Roosevelt suggested it serve as a permanent memorial to commemorate 100-years of peace between Britain and the States since the conclusion of the War of 1812-14. In 1914, Sulgrave was purchased  via subscription for $42,500 although all restoration work was delayed until the conclusion of World War I....
zoom_in 4 images 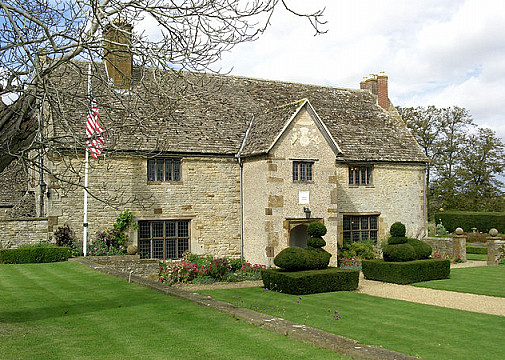 Lawrence Washington, of the Manors of Sulgrave & Wicken, Northamptonshire

In 1601, the Manor of Sulgrave was comprised of over a thousand acres and included the living of the neighboring Rectory of Stuchbury. By 1610, the Mayor's grandson, also called Lawrence Washington, had sold off all of the land (with his father's consent) except for 7-acres and the manor house itself to his first cousin, Lawrence Makepeace, of the Inner Temple, London. In 1659, three years after his cousins had settled in Virginia, Makepeace sold the manor out of the family to Edward Plant who in 1673 sold it to the Rev. Moses Hodges in whose family it would remain until 1840. Having been leased to a series of farmers, by 1911 it was dilapidated and only half of the original house was left standing.

In 1920, Sir Reginald Blomfield rebuilt the derelict house and added the west portion which had been lost towards the end of the 18th Century. In 1926, Alexander and Virginia Weddell modelled the west wing of Virginia House on the front facade of Sulgrave which was built with stones salvaged from the 16th Century Warwick Priory in the neighboring county of Warwickshire. Despite Sulgrave's status as a, "mecca for American visitors" by the 1990s underfunding threatened its existence. An endowment from the estate of Paul Mellon (only son of U.S. Secretary Andrew W. Mellon of Pittsburgh) and other donations from British charities have ensured its survival for the foreseeable future.

The Washingtons. Volume 1: Seven Generations of the Presidential Branch By Justin Glenn