Built circa 1850, for William Henry Vanderbilt (1821-1885) and his wife, Maria Kissam (1821-1896). Billy was the eldest son of "the Commodore," who constantly berated him, dismissing him as nothing more than a "blockhead" and a "blatherskite". At the age of nineteen, after three years working as a clerk in New York City, Billy had a nervous breakdown and was sent back to Staten Island where his parents had just moved into the first showpiece Vanderbilt Mansion at Stapleton....
zoom_in 4 images 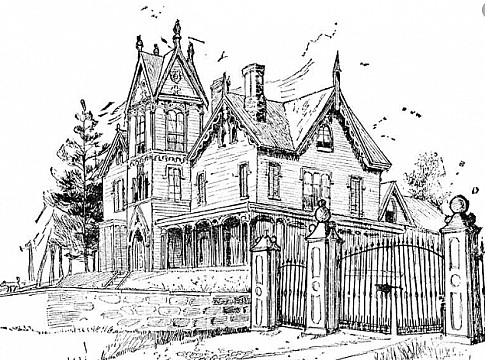 The Van Derbilts had been struggling to make ends meet as farmers on Staten Island since 1715. Billy's father, Cornelius, grew up on a small farm at New Dorp that Cornelius held on to - and even expanded - not because it made any money (it didn't) but, for sentimental reasons. Having decided that Billy was clearly not cut out for business, he gave him management of the farm. After Billy was married to a parson's daughter in 1842 - which only confirmed his father's suspicions that he was lazy and unambitious - Billy lived with his new wife at a Greek-Revival house in Tompkinsville, long since demolished.

In about 1850, whether to be closer to the farm or further from his father, Billy and Maria  built this 24-room farmhouse at New Dorp which they referred to as "the white house" - not with any pretension, merely because it was painted white. It was here that all their children grew up - the same children who collectively went on to build the largest and most iconic mansions in the Gilded Age. It was also here that Billy found himself, and the "blockhead" set himself on course to double the fortune left to him by his father and by doing so became the richest man in America at the height of the Gilded Age.

Billy's first achievement was to turn the family farm into a bonafide profitable venture. He adored horses and, again to his father's approval, laid out a trotting track to the south of the property, near the beach. He acquired an interest in the bankrupt Staten Island Railroad and almost single-handedly re-organized it into a success. In 1853, Billy joined the rest of his family on a cruise to Europe on the Commodore's new yacht, and by the time they returned six months later, Billy had won over his father and with it, his respect.

The Last Vanderbilt on Staten Island

The Vanderbilts lived here permanently until about 1864 when Billy became his father's righthand man in the railroad business. They moved into New York but maintained the house as a country home. In 1885, Billy died at his statement mansion, the Vanderbilt Triple Palace, and left "the white house" to his youngest son, George W. Vanderbilt, who is now remembered for building Biltmore, the largest private residence in United States. But less publicized is the fact that George also kept a home here after moving his father's house to another corner of the farm which was later demolished. On what is now Miller Field, George built a new mansion where he occasionally stayed until his death.

Staten Island Through Time By Margaret Lundrigan and Thomas Matteo

Staten Island: Like It Or Not! By Lorenzo Lucchesi

Staten Island: Isle of the Bay By Margaret Lundrigan