Completed in 1906, for Henry Clay Frick (1849-1919) and his wife, Adelaide Howard Childs (1859-1931). Their 104-room summer home was more than four times the size of their permanent home of the previous twenty years and longer than the White House. By the time it was finished, Eagle Rock was by far and away the largest and most conspicuous of the summer homes on Boston's North Shore. Here, Frick relaxed with his favorite golfing partner, William Taft, and much of the artwork that graced its walls can now be seen at the Frick Collection in New York. The house remained in the Frick family and was reduced in size in 1938 before being demolished in 1969....
zoom_in 20 images 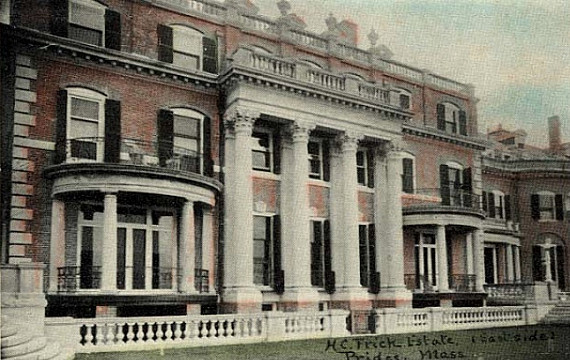 Henry Clay Frick was a native of Pittsburgh and together with Andrew Carnegie they dominated the steel industry at the height of the Gilded Age. He was as tough as he was ruthless: on one occasion, he not only survived being shot twice in the neck and stabbed five times in the leg, but was back at his desk by the end of the week! He died in 1919 leaving a fortune of $142 million of which $117 million went to public and charitable causes. He is best remembered today for the art collection that bears his name which is housed in his former New York mansion and has been open to the public since 1935.

"I want the place kept as simple as possible, that suits my tastes"...

In the summer of 1902, and again the following year, the Frick's leased Woodrock from Herbert M. Sears at Pride's Crossing on Boston's North Shore. So enchanted did they become with the area that in 1903 Frick bought three parcels of land totalling 25-acres between Hale Street and the Atlantic Ocean from "Judge" William H. Moore. Next, he employed one of New England's best known architectural firms, Little & Browne of Boston, and insisted that the design for his new home should be, "kept as simple as possible," stating that he did not care whether or not it would approved by, "Messrs. McKim, Mead & White, Messrs. Carrère and Hastings, or Mrs. Edith Wharton". As to the interior, his instructions to the architects were that it was to be kept "severely plain" ie., in stark contrast to Clayton and what had been fashionable in Victorian times.

For the era, the interior fell into line with Frick's instructions, but on seeing pictures of the exterior at the end of 1905, Frick wrote bluntly to the architects: "I was rather alarmed. While it probably is beautiful, it is far too elaborate to suit my tastes as I have always explained to you". Its unclear what, or if any, changes were made at that late date.

"What on earth would I do with a million dollars?"

Sited back from what is today the intersection of Hale and Thissell Streets, the anything-but-simple 104-room colossus was finished in time for the summer of 1906. It had cost Frick over a million dollars, but on the North Shore money could not buy everything: Having had his initial offer declined for a strip of land that would have given him direct access to the shore via the Loring property, he made another offer he was sure could not be refused. In a response that could've only come from someone who'd never wanted for anything, and with an air of frivolity that only those born very rich can affect, Miss Loring piped back, "Goodness! What on earth would I do with a million dollars?"!

"The Grandest Mansion North of Newport"

Even though the Fricks had made their home for the previous twenty years at Clayton, their house of 23-rooms in Pittsburgh, Frick first got a taste for large mansion living in 1905 when he leased 640 Fifth Avenue from George Washington Vanderbilt II.

Eagle Rock was the largest house and the most expensive project ever undertaken by Little & Browne. Three hundred men were involved with the grading and stone work and on completion the 104-room mansion had cost $604,316 to build. The magnificent iron fence interspersed with stone pillars along Hale Street cost $100,000. Landscaping the grounds and decorating the gardens with 26-statuettes cost a further $321,517, and aside from the garage and other outbuildings, the stables alone cost $50,000 at a time when a skilled carpenter could expect to earn $84 a month. Principally Neo-Georgian in style, the main house was built with brick, trimmed with limestone, and named for the eagles that nested there. On completion, it was considered to be, "the grandest mansion north of Newport".

The front facade bore a particular resemblance to the southern facade of the White House and measured 200-feet across, which was in fact 30-feet longer than the President's house. To get some idea of its scale and the enormity of the work involved, 48,000-yards of fill and loam was brought in by special train before being loaded onto a special spur built for purpose at Pride's Crossing Station. That was the equivalent of 2/3 trains arriving a day over a period of two months for a total of 1,650-carloads - just for the lawn.

The Fricks would arrive on their private Pullman carriage in June which was then parked in its own shed at Pride's Crossing station. Once at the house, moving between its four floors was made easier with the installation of an elevator, and the Aeolian organ (which cost $50,000) could be played from three different consoles - making the job of the Frick's organist, Mr Archie Gibson, somewhat less sedentary. In the basement there was a temperature controlled plunge pool with separate pipes allowing it to be filled with either fresh or salt water. Such innovations were extraordinary for the time and were admired by the great inventor George Westinghouse - Frick's old friend and neighbor from Pittsburgh - who with his wife were among the first to receive an invitation to Eagle Rock.

The interiors were finished and furnished by Tiffany with input from Joseph Duveen (who would continue to play an increasingly influential role in Frick's collection) and Elsie de Wolfe. It was the latter who sourced Eagle Rock's Chippendale dining table with 18-matching chairs. During construction, Frick became interested in 17th and 18th century bronzes and porcelain, which featured heavily within its many rooms. The Drawing Room was panelled in Jacobean English oak, now seen at the Frick in New York in the 'English' room to the right of the Gallery of Italian Art; and, to give an idea of the scale of the reception rooms on the ground floor, the rug in the Music Room measured 20-by-30-feet. To round out the luxury, every bathroom sparkled with silver-plated plumbing.

The Fricks held a housewarming here in September, 1906, but it was the party they gave three years later that made the headlines: In 1909, they gave a party for 500-guests to celebrate their daughter Helen's 21st birthday. Almost certainly spurred on by Helen - who instead of asking for a gift of jewelry as a debutante convinced her father to donate 150-acres to the city of Pittsburgh for a children’s park - the Fricks not only invited all the upper crust of the North Shore, but also most of the townsfolk too. That the Fricks did not bat an eyelid between them by doing so is credit to their character, but when word got out, it caused social mayhem! With the two groups refusing to talk to one another, Frick was forced to split the party in two - luckily, there weren't many others who could so easily hold two distinctly separate parties, each for 250 people, all under the same roof!

Three years laters (August, 1912), the Fricks held another much-reported party, however this time the reputed 'thousands' of townsfolk were content to line themselves up against the iron railings to catch a glimpse of the glamorous guests and a chord or two from Sousa's band. The guest list that night included some of the most prominent names from Newport, Bar Harbor, and the Berkshires too, but leading up to the event spurious stories had run rife: a thousand people were supposedly invited, but society had supposedly turned their noses up at it and Frick's best friend at Pride's Crossing, President Taft, could not come as he was held up in Washington and the rest of his family were in mourning.  Irrespective of the validity of any of these rumors, it was a spectacular party:

It was about the terraces (at the rear, facing the Atlantic) that the scene was the prettiest with hundreds of beautifully gowned women, making a picture of color and animation. In the evening there was a charming display of Japanese lanterns of many shapes and colors, and these with strings of colored incandescents gave the terrace a fairyland appearance.

Life after Frick & the Iron Rail

Frick died in 1919. His wife, Adelaide, loved Eagle Rock and continued to come every summer, dying here in 1931. After her death, the Frick's daughter Helen who - despite having found it far too opulent for her tastes - still continued to visit, albeit less frequently. Nonetheless, in the summers she was never far away: In 1909, when her father had proposed to buy her a string of unblemished pearls for her 21st birthday present, she instead asked him to buy her a farm as a vacation home for female textile workers from the Boston area. Used to his daughter's alternative requests, Frick happily complied and the Iron Rail Vacation Home at neighboring Wenham was founded. Helen later said that of all the things in her life, her “greatest interest” was the Iron Rail.

In 1938, Helen reduced Eagle Rock in size by taking down the family wing before demolishing it altogether in 1969 to save on its exorbitant running costs. Almost all of the antiques and artwork were transferred to the Frick in New York and its elaborate wrought-iron gates were resurrected at Clayton. Clayton also received Frick's carriage collection that was stored here - a sort of 19th century equivalent to a garage full of Rolls-Royces. Today, the carriage house is one of the few outbuildings still standing, along with the brick garage, stables, electric powerhouse, and stucco gardener's cottage.

Building the Frick Collection: An introduction to the House and Its Collections By Colin B. Bailey

After the Ball By Patricia Beard

A Most Wicked Conspiracy: The Last Great Swindle of the Gilded Age By Paul Starobin