Completed in 1923, for Joshua S. Cosden (1881-1941) and his second wife, Nell Neves (1887-1963). Sitting on 27-oceanfront acres their 73-room mansion set them back $1.8 million and was the largest in Palm Beach and arguably the most opulent of those designed by the famous Addison Mizner. It was noted not only for the scale and detail of its magnificent Moorish architecture, but also for a series of stunning murals by José M. Sert. But after just three short years (1926), the oil millionaire's newly minted fortune ran dry and he sold up to auto heiress Anna Dodge (1871-1970). She didn't just take the house, she took the realtor too, marrying Hugh Dillman, 14-years her junior that same year. In 1957, after losing a five year battle to have zoning laws changed so that it might become a school or club, the pride of Palm Beach fell to the wrecking ball....
zoom_in 11 images 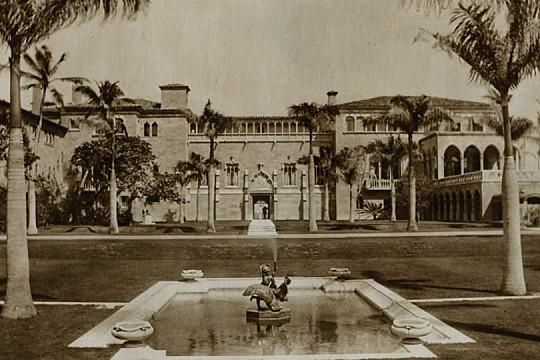 Josh Cosden started his career as a drugstore clerk in Baltimore before heading to the oil fields in Oklahoma where he struck it rich and made a $50 million fortune. In 1918, he married the ex-wife of his neighbor across the street (Charles Roeser) and leaving Tulsa they headed for New York City. Aside from building Playa Riente (Spanish for "Laughing Beach"), they bought estates in Newport and on Long Island; stocked their stables with the finest thoroughbreds; and, took to travelling in their own private railroad car and yacht. Whereas so many who had gone before them had failed to crack high society, Josh and Nell Cosden had, "brains, charm and graciousness," and the Prince of Wales' preferred the small and intimate dinner-dances they gave for him during his stay in Long Island in 1924 than any number of the elaborate soirées laid on by the established blue-bloods.

"The Finest Private Residence in America in the early 1920s"

The original 10-acres bought for Playa Riente sat between the estates of T. Suffern Tailer and Stuyvesant Fish. The showpiece seasonal home the Cosdens built here was three times the size - and cost three times as much - as El Mirasol, another Mizner-designed masterpiece and one of the four homes of the "Queen of Palm Beach," Eva Stotesbury.

Accompanied by Mizner, Nell Cosden went on a spending spree in Europe to find exactly the right antiques with which to decorate Playa Riente's 73-rooms. Perhaps her most important acquisition was a series of nine murals painted by Spanish artist José Maria Sert for King Alfonso XIII. Back at Palm Beach, they were laid out in the Music Room, filling nearly every square inch of wall beneath a Moorish coffered ceiling. In the Dining Room, she commissioned R. Sherman Kidd to recreate the distinctive decor in the Palazzo Davanzati in Florence. Kidd was also reported to have painted a mural of Desoto's Life spread over 111-feet in 18-foot lengths, but in which room remains open to debate.

Perhaps the most awe-inspiring room was the stone, double-story, 60-foot long entrance hall with columns that seemed to twirl up towards its Gothic vaulted ceiling. The stairs at the far end - leading up into the living room with both morning and evening loggias and a belvedere - were influenced by the "Escalera del Monumento" in the Cathedral at Burgos, Spain. Entertainments were centered around the 70-foot long Venetian ballroom on the second floor and its balcony that appeared to float over the ocean at high tide: Vogue magazine called Playa Riente, "the finest private residence in America in the early 1920s".

Easy Come, Easy Go
Through a combination of extravagance, taking his eye off his businesses, and dabbling on the stock market, just seven years after making $50 million, "Game Josh" Cosden had lost the lot - and in the process made J.K.L. Ross look abstemious! Maintaining the confidence of his friends and colleagues, he made another $15 million in Texas before the Great Depression dashed that too. According to the Oklahoma Daily what were reputed to be all his remaining assets were sold at auction a week before his death "by heart attack" was reported. In 1966, his youngest son, Joshua S. Cosden Jr., briefly shot the family back into the headlines when he became the fifth of the nine husbands of actress Zsa Zsa Gabor.

In 1926, Playa Riente was sold for $1.8 million (precisely the same amount it had cost the Cosdens to create it) to Mrs Anna Dodge, widow of the car manufacturer Horace E. Dodge of Detroit. Having cashed in her shares in the Dodge Motor Company earlier that year for a cool $73 million, the former piano teacher born in a 2-bed rented apartment in Scotland, now found herself to be one of the richest women in America.

Despite their millions, towards the end of World War I Detroit's upper crust had still not given the Dodges an entrée into society and so Anna persuaded her husband to buy them an estate in Palm Beach where she was determined to mix with the less stuffy but bonafide east-coast aristocracy. She was overjoyed in 1920 when her strategic social-climbing paid off and their only daughter Delphine married James H.R. Cromwell, son of the previously mentioned "Queen of Palm Beach," Eva Stotesbury. That joy quickly turned sour after her husband died, but just six years later (1926) Anna found herself to be three times wealthier than he had ever been and she disposed of their old home in favor of the largest mansion on Palm Beach... which came with the added perk of a new husband.

The sales agent who showed her the property and oversaw the purchase was former actor Hugh Dillman who Anna had met some three years before while touring Venice in Italy. Dillman had only appeared in one film, "An Amateur Widow" (1919), but a cynical mind might say that it set in motion something along the lines of a career plan. In the film, his character ends up marrying a very wealthy widow. In real life on May 8, 1926, he married Mrs Dodge, whose investments gave her an income of $1.5 million a year. On the marriage certificate, the blushing bride gave her age as 49, but in fact she was 55. He was 41.

The marriage did not last - they were separated by 1940 and divorced in 1947 - but Anna never failed to credit Hugh for her metamorphosis from a tight-fisted mechanic's wife to to someone who staff and family alike would dub "The Queen," seeing herself as a modern-day Madame de Pompadour - for whom the Le Petit Trianon was built - and the owner of one the most important collections of French 18th Century art and antiques: "Hugh taught me how to have fun with my money"; and, Anna was a quick learner.

At Playa Riente, Hugh and Anna presided over countless parties that saw Anna start what would become her trademark pièce de résistance for all her parties both here and at her magnificent home in Detroit, Rose Terrace: a swan carved from ice filled to overflowing with the finest Beluga Caviar. It was also here in 1938 that she celebrated her most important social triumph, when she and Hugh hosted the newly married Duke and Duchess of Windsor - and perhaps the Duke remembered his former friend who'd fallen on hard times. Anna's yacht, Delphine, glittered at the end of the peer; the gardens glowed with a soft light thrown from hundreds of Chinese lanterns; two full orchestras played until the last guest went to bed; and the fountains literally flowed with champagne.

When the Beach Stopped Laughing

By 1952, Anna conceded that it was impossible to run Playa Riente without, "a suitable staff of servants". The last happy event to take place here was in 1953, the fifth - and final - marriage of Anna's 52-year old son, Horace Jr., to the 27-year old Hollywood actress, Gregg Sherwood. Eight years later he tried to divorce her, saying " I can't afford the woman". He died before it was finalized and she ended up squeezing $20 million out of the Dodge family, but Horace Jr. wasn't wrong - she filed for bankrupty in 1978!

In 1954, Anna held a 3-day auction of the contents of the house which drew a record crowd of 2,500. In 1957, after losing a five-year legal battle to have the town's zoning laws changed to allow Playa Riente to be used as a club or a school, Anna razed what had been the crown jewel of Palm Beach and sold off the land in lots for development.

Kidd's work in the Dining Room was lost, but Sert's murals were gifted to the Detroit Institute of Art. One room that survived and can still be enjoyed was the Spanish cantina (bar). It wasn't one of the grandest rooms, but it was a masterpiece in itself which speaks volumes for what's been lost: the low-beamed room in the traditional style is laid with a brick floor in a herring-bone design; medallions on the center face of the bar and walls are decorated with colorful Portuguese tiles; and, porcelain bowls hang from the walls. Today, it's The Patio restaurant at Vero Beach, just north of Palm Beach.

Addison Mizner: Architect of Fantasy and Romance By Beth Dunlop

Bubble in the Sun: The Florida Boom of the 1920s and How It Brought on the Great Depression By Christopher Knowlton