Built 1860, for Mrs Caroline (Perry) Belmont (1829-1892) and her husband August Belmont (1813-1890). Among the earliest of the grand Newport mansions, this elegant house was located on 14-acres of land off Bellevue Avenue. Belcourt was later built by the Belmont's son, Oliver, on three of its original acres. After its demolition in 1946, the remaining acres were added to the gardens of neighbouring Rosecliff, before being sold for development to help pay for that mansion's upkeep....
zoom_in 4 images 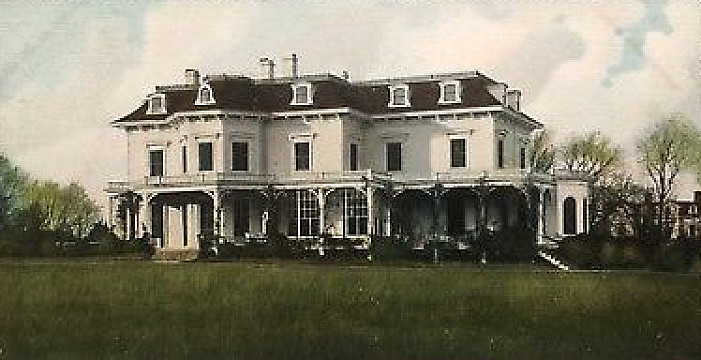 August Belmont was the influential financier who dissuaded the Rothschilds and other leading bankers from lending money to the Confederacy during the Civil War. He had been U.S. Minister to The Hague in Holland, Chairman of the Democratic Party, and as Chairman of The Jockey Club, he was passionate about horse racing and it was for him that the Belmont Stakes was named. His wife, Caroline, was a scion of an old Rhode Island family, two of whose members had been Governors of Rhode Island.

By 1860, the Belmonts had started to find Saratoga "too commercial" and visiting Caroline's father, Commodore Matthew Calbraith Perry, at Newport they hired a villa there for the summer season. They enjoyed it so much that they purchased a fourteen-acre farm next door for $47,000 upon which they would build their own house, misleadingly named "By-the-Sea". Designed by Mrs Belmont's first cousin, George Champlin Mason Sr., their new three-story summer home was Italianate in design with a French mansard roof, semi-circular portico, and a verandah with bracketed trim.

The Belmonts were the first to set the fashion for ten-course dinners in the French style at Newport and they employed a total of 26 staff (sixteen liveried domestic servants and ten groundsmen). Mrs Belmont immediately made an indelible impression on Newport society, as recorded by Cleveland Amory (1917-1998) in The Last Resorts (1973):

Mrs Belmont had elegant French manners, beautiful jewels and was a pioneer resorter. When she deserted her beautiful country seat at the once fashionable Staten Island and built 'By-the-Sea' at Newport, the event marked the beginning of a new era. All old-time Newporters today still recall stories of the sensation created by Mrs Belmont's famous 'demi-daumont'. A Paris importation, the carriage was drawn by 4-horses with no driver, but with two rear horses ridden by postilions in short jackets, tight breeches & smart jockey caps.

After his parents death, the house was inherited by Perry Belmont (1851-1947) and his wife Jessie Ann Robbins (1862-1935). In 1905, they carried out extensive renovations to the house, painting it white, enlarging it considerably and giving it a less Victorian feel, but in 1909 transferred ownership to Perry's younger brother, August Jr. In 1933, Perry Belmont added Belcourt to his property portfolio. He inherited the mansion - the 3rd largest in Newport behind The Breakers and Ochre Court - from his sister-in-law, Alva.

From 1933 onwards, Belmont rented his summer home during the season to the socialite Evalyn Walsh (1886-1947), widow of Edward Beale Maclean (1889-1941), owner The Washington Post and The Cincinnati Enquirer. In the late 1940s, Belmont sold the house to a corporation who continued to lease it out for Newport's declining summer seasons. It was finally sold again for tax reasons to one J.C. O'Donnell, who turned a small profit when it was immediately afterwards purchased in 1945 by Ray Alan Van Clief (1892-1945) who had just recently acquired neighbouring Rosecliff.

Van Cleif was killed in a car accident only months later on his way home from Providence to Newport. The following year, his widow demolished By-the-Sea. In 1947, she then sold Rosecliff with its increased acreage to J. Edgar Monroe (1897-1991). In 1971, Monroe donated the property - the majority of which had previously belonged to By-the-Sea - to the Preservation Society of Newport. Twelve of the 14-acres that had once belonged to the Belmonts was sold for development with the proceeds used to maintain Rosecliff. The land was subdivided and new homes were put up on the former Belmont estate in 1986.

The King of Fifth Avenue: The Fortunes of August Belmont By David Black

The Battle of Lake Erie: One Young American's Adventure in the War of 1812 By David Vining

The Last Resorts By Cleveland Amory

All About the Story: News, Power, Politics, and the Washington Post By Leonard Downie Jr.