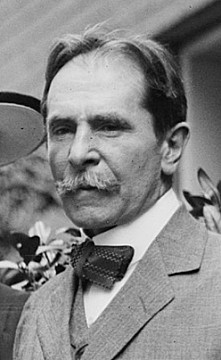 He was born in New York City, to a self-made German-Jewish father and a mother with old roots in Rhode Island. He was the elder brother of O.H.P. Belmont who married Alva Vanderbilt. He was educated at Everest Military Academy in Hamden, Connecticut, and Harvard University (1872). He studied law at the University of Berlin and graduated from the Columbia Law School in 1876. He began his career in New York as a partner in the legal firm of Vinton, Belmont & Frelinghuysen and in 1881 was elected as a Democrat to Congress before resigning in 1888. His career as a Congressman was marked by his celebrated cross-examination of ex-Secretary of State James G. Blaine regarding Blaine's links with Federico Barreda and Peru's guano trade. He was very briefly the U.S. Minister to Spain for a few months between 1888 and 1889, and in 1890, the French government honored him as a Commander of the Legion d'honneur.

During the Spanish-American War (1898) he held the rank of Major as Inspector-General to the First Division of the 2nd Army Corps. He was a founding director of the Consolidated National Bank of New York and in Washington he was President of the National Publicity Bill Organization that fought for campaign finance disclosure between 1906 and 1911. Perry, like all the Belmonts was passionate about all things equine: He was President of the United Hunts Association, President of the Turf & Field Club at Belmont Park, and with his brother, August Jr., co-founder of The Jockey Club.

In 1899, he married Mrs Jessie (Robbins) Sloane - just five hours after divorcing her husband of 17-years which sent shockwaves through Gilded Age society. He was stepfather to her two daughters, but died without children of his own. They lived between 580 Fifth Avenue in New York, the magnificent Perry Belmont House in Washington D.C., and By-the-Sea in Newport. He inherited Belcourt from his brother but never lived there. Having lost heavily on the Wall Street Crash they sold up much of their art and furniture, closed their houses in the States, and moved into a suite of rooms at the Ritz Hotel in Paris. A Francophile, he spoke, read, and wrote French, "like the most cultivated Parisian".