Completed in 1892, for William Kissam Vanderbilt (1849-1920) as a birthday present for his first wife, the indomitable Mrs Alva Vanderbilt. Many American houses may have been large and grand such as its neighbour, Beechwood (then owned by the Astor Family), but Marble House set a precedent for the mansions of the Gilded Age by being truly palatial. One of the earliest residential examples of Beaux-Arts architecture, the U-shaped mansion of four storeys sits on grounds of 4.4 acres with views behind over the cliffs to the Atlantic Ocean. Today, Marble House serves as a museum and is operated by the Preservation Society of Newport County....
zoom_in 20 images 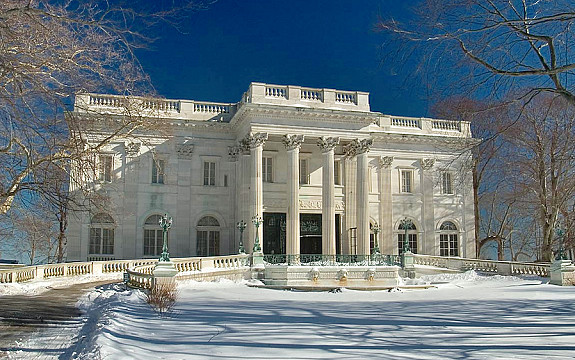 In 1888, Willie Vanderbilt instructed the architect Richard Morris Hunt (1827-1895) to build "the very best living accommodation that money could buy". The mandate was on the pretext of being a birthday present for his wife, but it was also in direct response to the not-so-thinly-veiled societal challenge laid before her by Mrs Goelet who had sought to outdo the Vanderbilt chateau in Manhattan by building Ochre Court in Newport.

Modelled after the Petit Trianon near Paris, the result was a 50-room mansion that took four years to build (1888-1892) at an astonishing cost of $11 million of which a widely reported $7 million - though in fact the price tag was a 'mere' $1.75 million - was spent on 500,000 cubic feet of marble. During the works, fences were erected around the property and Alva even went to the extremes to make sure that none of the workmen could speak English - Chinese labourers were brought in - so they couldn't be overheard in bars talking about the project. It was all to be kept a grand surprise...

The house was finally unveiled with a ball held on August 18, 1892. The theatrical Alva kept her guests waiting at the gates on Bellevue Avenue while the house sat in total darkness. Once everyone was gathered, Alva gave the signal and suddenly the house was lit up in an explosion of light from within and out. The New York Times reported, "the grand portico was a blaze of light and dozens of liveried attendants were on hand to assist and escort the guests from carriage to cloakroom and finally to the tables with their gold-plated cutlery".

The interior was finished by the French design firm of Jules Allard & Sons. The architecture both inside and out was nothing short of palatial, and the state rooms on the ground floor included the Main Hall and Staircase; the Gold Louis XIV Drawing Room (that also served as the ballroom); the Gothic Library; and, the Grand Dining Room with its thirty-four foot table. A full staff of 36 servants (including butlers, maids, coachmen and footmen) were required for the day-to-day running of Marble House.

In 1895, just three years after the completion of Willie Vanderbilt's more than generous birthday present to his wife, Alva divorced him - apparently it wasn't only her on whom he'd been lavishing his 'attention'! By that time, she already owned Marble House outright and received something in excess of $10 million plus further estates by way of settlement from her husband. In less than a year, she had remarried a Newport neighbour and one of her ex-husband's oldest friends, Oliver Hazard Perry Belmont (1858-1908).

To Catch a Duke

In 1895, Alva made the short move to her new husband's home, Belcourt Castle, further along the avenue. But, in August that year, she chose to use Marble House for the coming out party (debutante ball) of her only daughter, Consuelo Vanderbilt (1877-1964). 300 live hummingbirds were released to hover around an indoor fountain in the ballroom in honor of the most distinguished of the 400 guests/fortune hunters there that night, Charles Spencer-Churchill (1871-1934), 9th Duke of Marlborough. Alva's investment paid off when Consuelo was famously (unhappily) married off to the Duke by the end of the year.

The Grandest Launderette in the History of the World?

Alva continued to spend the summer season at Newport, and although she was no longer resident at Marble House, she continued to use the house for the washing and ironing of her clothes (at a time when a society lady might have required up to six different changes of clothes per day), preferring her own laundry staff to those at Belcourt. And so, it became possibly the grandest launderette ever known to history! Other than this, Marble House remained essentially closed until her husband's sudden death in 1908.

Alva moved back into Marble House from 1908. The following year she opened the house to the public, charging $1 to visit the grounds and $5 to the view the interior - this was carefully considered to make it quite unaffordable to the general public! Her reason for charging was to raise awareness of the women's suffrage movement.

In 1913, she commissioned the brothers (sons of the original architect) Richard Howland Hunt (1862-1931) and Joseph Howland Hunt (1870-1924) to build her a Chinese Tea House on the cliffs ready for the Chinese Ball she held in 1914. Inspired by 12th century Sung dynasty temples, the octagonal windows and surrounding wooden terrace overlooked the ocean. The teahouse was the site of many more fundraisers and rallies for Alva's favorite cause, the women’s suffrage movement in both America and Britain.

From 1918, Alva spent most of her time at her castle in Long Island, Beacon Towers, from where she directed her operations for the women's liberation movement as competently as any military general. But, from 1923, Marble House was closed again as Alva moved permanently to France at Chateau d'Augerville to be with her daughter, Consuelo, who had moved to France after finally divorcing her Duke in 1921.

Fit for a Prince, or Two

In 1932, at the height of the Great Depression and one year before her death, Alva had no more use for Marble House and sold it for a token $1 along with its contents for $99,999 to Frederick Henry Prince Sr. (1858-1953) and his wife Abigail Kingsley Norman (1860–1949). The Prince family spent every summer there, with both father and son competing in yacht races, tennis and polo matches. After the death of Mr Prince in 1953, Marble House was inherited by his only surviving son, Frederick Henry Prince Jr. (1885-1962).

On July 13, 1957, Frederick Prince Jr., and his second wife, Lucy Virginia Mitchell, leant their summer home to the Preservation Society of Newport County to host the Tiffany Ball for 1,200 guests. The ball was a fundraiser for the restoration of some Newport's 17th and 18th Century buildings. It was the first public party to be held at Marble House. John Fitzgerald Kennedy (1917-1963) was in attendance, as was one of the Vanderbilts, Gladys Vanderbilt (1886-1965), Countess Széchenyi, who had recently inherited The Breakers.

In 1963, one year after the death of the younger Mr Prince, Marble House was purchased by Alva's youngest son, Harold Stirling Vanderbilt (1884-1970). He donated the house to the Preservation Society of Newport County, while the Frederick H. Prince Trust of Chicago donated the interior furnishings. Marble House was opened to the public from 1964 and continues to be run by the Preservation Society of Newport as a museum. It was designated a National Historic Landmark in 2006.

The interior of the mansion has appeared in several films or television series, including: The Great Gatsby (1974) from the book by F. Scott Fitzgerald (1896-1940) and starring Robert Redford and Mia Farrow; True Lies (1994) starring Arnold Schwarzenegger and Jamie Lee Curtis; 27 Dresses (2008) starring Katherine Heigl. More recently, Victoria's Secret filmed one of their 2012 holiday commercials at the house.

The Glitter and the Gold: The American Duchess - In Her Own Words By Consuelo Vanderbilt Balsan

American Duchess: A Novel of Consuelo Vanderbilt By Karen Harper