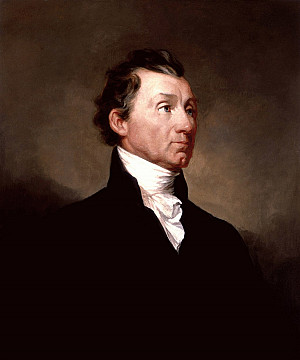 He was preceded in the Presidency by James Madison and after serving two terms in office for the Democratic-Republican Party he was succeeded in 1825 by John Quincy Adams. His Vice-President throughout was Daniel D. Tompkins.

He was born in Virginia to a moderately prosperous planter and carpenter. Orphaned by 16, his uncle, the Judge and Delegate to the 2nd Continental Congress, Joseph Jones, became a surrogate father. His uncle took him to Williamsburg to be educated and introduced him to the leading men of the day. On the outbreak of Revolution, he joined the 3rd Virginia Regiment and saw action in various campaigns, rising to the rank of Colonel, but he ultimately lacked the funds to raise a regiment. He returned to Virginia to study law as a means to an end and became Jefferson's protege. He entered politics in 1782 on his election to the Virginia House of Delegates and then the Congress of the Confederation. From 1794-96, Washington appointed him U.S. Minister to France.

He was Governor of Virginia (1799-1802) before President Jefferson sent him back to France to assist Robert R. Livingston in the Louisiana Purchase. He was then appointed U.S. Minister to the United Kingdom (1803-1807). He was sorely disappointed when Jefferson refused to sanction his "Monroe-Pinkney Treaty" with Britain which drew the countries closer to war. But, by the time he was Madison's Secretary of State (1811-1817), he pushed for the War of 1812 and also filled the role of Secretary of War (1814-1815). He signed the Treaty of Ghent in 1814 and won a landslide Presidential victory in 1816 for the Democratic-Republican Party. He served two terms as U.S. President from 1817 to 1825.

As President, he steered the U.S. through the Panic of 1819; oversaw the U.S. acquisition of the Floridas from Spain (1819); and, in his annual message to Congress in 1823 articulated the "Monroe Doctrine" confirming (1) U.S neutrality in European wars (2) un-acceptance of the recolonization of any country by its former European master, and, (3) affirmation that Europe should no longer view any part of the Americas as open to colonization - aimed at Russia who were the trying to expand in the Northern Pacific.

At the end of his tenure, he retired to his plantation, Oak Hill, in Leesburg, Virginia. He had married Elizabeth Kortright, of New York City, in 1786. Their only son died in infancy and they were survived by two daughters, Mrs Hay and Mrs Gouverneur. After his wife died in 1830, Monroe moved up to New York City to live with the Gouverneurs and died less than a year later on July 4th, 1831. Despite several political fallouts, his best friend since 1784 had been James Madison. Monrovia, the capital of Liberia in Africa is named for him - the only capital other than Washington, D.C. named after a U.S. President.

The Last Founding Father: James Monroe and a Nation's Call to Greatness By Harlow Giles Unger

The Virginia Dynasty: Four Presidents and the Creation of the American Nation By Lynne Cheney

The Autobiography of James Monroe By (Edited) Stuart Gerry Brown