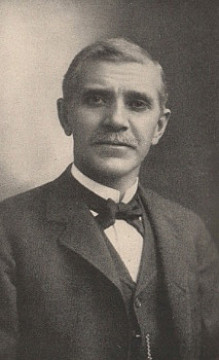 He was born at Wilkinsburg, Allegheny Co., Pennsylvania. Not yet sixteen, he enlisted with the 155th Pennsylvania Regiment as the regimental flag-bearer. Rising to the rank of Sergeant: "He fought the duration of the war, carrying the flag in some of the war’s bloodiest battles. His commitment to his superiors seemed to surpass logic and, at times, was almost religious in its conviction". He was "dangerously" wounded at Five Forks in April, 1865, and was discharged by general order three weeks after his regiment in June. After the war, in Pittsburgh as a young shipping clerk, he came to the attention of Andrew Carnegie who in 1872 put him in charge of the Lucy Furnaces.

Under Curry's, "able and efficient management, the production of pig iron went ahead by leaps and bounds". As Henry Phipps had proved to be Carnegie's master in technology, Harry Curry came to be recognized as one of the steel industry's best managers, in charge of the Edgar Thomson Steel Works which was viewed as the most important steelworks in Pittsburgh. Over the years, he and Carnegie became friends and his service was rewarded with a partnership in Carnegie Brothers & Co., finishing his career as company Treasurer. However, he sided with Henry Frick when Frick and Carnegie famously fell out. In retirement, he was Treasurer to the 155th Regimental Association, cheerfully offering help and business advice to his former brothers-in-arms. Having made "an ample fortune," he lived at 168 South Homewood Avenue in Pittsburgh and in 1905 built a summer home, "an imposing mansion... situated in a pleasing environment of trees" on Hesperus Avenue in Magnolia, Gloucester Co., Massachusetts. He married Harriet Girty and had five sons and two daughters: Laura, Mrs Estabrook; and, Margaret, Mrs Chaplin, of Ellenborough.