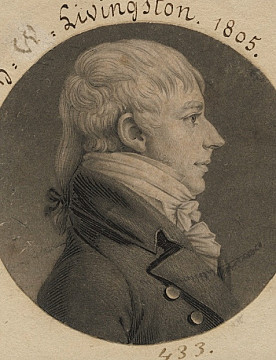 He was born on the Manor of Livingston in Columbia County, New York, and grew up at Teviotdale. He graduated from Yale University (1786) and entered upon a legal career in New York City as a clerk in the offices of Alexander Hamilton. From 1792 to 1794, he went to France as private secretary to Gouverneur Morris, the U.S. Minister. On returning to New York, Morris wrote approvingly of him to George Washington: "You will find Mr Livingston to be trusted... his discretion may always be depended on... he is modest, polite, sensible, and brave..." He chose not to continue his diplomatic career, but was appointed a Judge of the Court of Common Pleas in Columbia County and a Member of the New York State Assembly. He was elected U.S. Congressman from New York and served from 1803 to 1807. His beautiful home designed by an Italian architect that he built in Columbia County, The Hill, was recently destroyed, and prior to living there he was briefly resident at The Hermitage. In 1796, he married the, "remarkable Lady Mary" Allen, grand-daughter of Chief Justice William Allen who lived between Philadelphia and Mount Airy. They were the parents of 7-children.