Built circa 1799, for U.S. Congressman Henry Walter Livingston (1768-1810) and his wife from Philadelphia, "Lady Mary" Allen (1776-1855). Sometimes referred to as the Henry W. Livingston House or the Mary Livingston House, it was situated at Bell's Pond, six miles south of the City of Hudson on an eminence from which it commanded a magnificent 60-mile view along the Hudson Valley. The estate of 271-acres was part of the original Manor of Livingston. According to tradition, the house was designed by an Italian architect with whom Livingston had become acquainted while living in Paris and its classical architecture set it apart from the myriad of Colonial houses then prevalent within the Hudson Valley. "The Hill" was made famous by the "remarkable" Mary Livingston, known as "Lady Mary," but it was in fact far longer associated with the Bell family and remained a private home until purposefully burned by a developer....
zoom_in 5 images 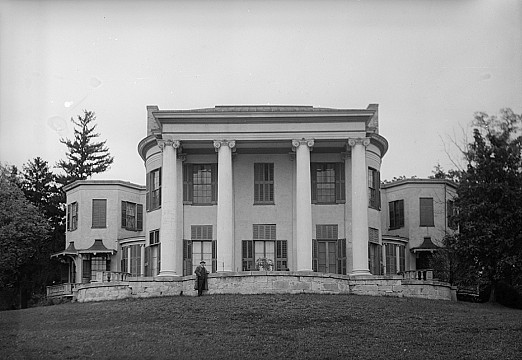 Henry W. Livingston grew up at nearby Teviotdale. From 1792 to 1794, he lived in Paris where he was remembered as the, "modest, polite, sensible, and brave" private secretary to the U.S. Minister to France. He was married to Mary Masters Allen in 1796 and by 1798 he was back in the Hudson Valley having taken up his appointment as Judge of the Court of Common Pleas for Columbia County. The Livingstons very briefly made their home at The Hermitage. However, by June, 1799, they were no longer there which leads to the assumption that The Hill was either built from, or completed by, 1799.

In 1852, the landscape gardener A.J. Downing described the house and estate: "The park is perhaps the most remarkable in America, for the noble simplicity of its character, and the perfect order in which it is kept... The mansion is one of the chastest specimens of the Greek style and there is an air of great dignity about the whole demesne".

Standing on the ridge of a hill, the house was approached by two long, separate, winding driveways and was solidly constructed with stone and brick covered in stucco. To its south, west, and north, it surveyed miles of wooded hills and farmland, framed by the Catskills beyond. To its east, beyond a dense wood enjoyed by a series of meandering paths, lay a valley of meadow and pasture through which the Claverack Creek wound its way towards the mighty Hudson. The house, gardens and grapery stood just south of the ridge while other outbuildings - including the huge and impressive barn and stable block - were found on the north side, concealed by a row of trees. The house faced southwest and the lawns sloped down to an artificial lake ringed by a profusion of white and yellow pond lilies.

The house of two stories over a basement with an attic faced southwest and was fronted by four two-story Ionic columns. Each of the ceilings on the two principal floors reached up a regal 14-feet in height. The walls on each side of the main building were partially bowed to allow for two large oval rooms within, which on the ground floor incorporated the formal dining room and formal drawing room. Behind, attached to the main block by a matching pair of hyphens lined with smaller Ionic columns were two large octagonal capped wings which on the ground floor contained the family living room and library.

The interior was described in 1925: "The vestibule (at the back of the house) opens into the reception room and the grandeur and stateliness of the interior are at once seen. The lofty ceilings, large high windows and carved woodwork give the impression of a baronial hall which is heightened as we pass into the central hall, grand and spacious, with its broad arches and marble columns and the magnificent staircase... The basement is extensive and rambling with its kitchens, housekeeping apartment, servant's dining room, wine cellars and other divisions; not least noteworthy of which are the dungeons, dark as midnight, in which refractory slaves and evil doers were occasionally confined for their misdeeds..."

The original interiors were remarkable for their exceptionally fine, detailed decoration. The entrance hall (the floor of which was covered by a large and beautiful carpet with the Livingston coat-of-arms at its center) and its "superb and massive" staircase were thought to have been commissioned by Mary Livingston sometime between 1810 and 1850. She is also assumed to have added some of the marble mantelpieces and cornicing too.

The Livingstons had a reputation for entertaining in grand style and among the more distinguished guests to have enjoyed their hospitality included Louis-Philippe, who would later be crowned the last King of France; the Marquis de Lafayette; Granville Penn; and, Joseph Bonaparte, former King of Spain, who remained for several days with his daughters and an entourage of 40 servants! Years later, on his deathbed in Italy he met with one of the Livingston's daughters and told her: "Your mother should have been a queen!"

After her husband's death in 1810, Mary confided in her diary that she was now without, "my Friend, my Protector, my Guide... I found myself called upon to fulfil not only the duties of a Mother and a Mistress, but to regulate the Concerns of a large Estate, which at that unfortunate moment, was involved in difficulty by the cabals and discontents of the tenants". She went on to say that, "several circumstances have prevented my employing an Agent, in the management of my affairs yet I am totally unacquainted with Business and can only gain a knowledge of it at the expense of some mistakes in the Beginning".

It was her skill in managing the estate and the fairness with which she treated her tenants - not to mention her "charming manners" - that led her to be known as "Lady Mary". Even in 1938 it was recalled that, "the memory of her still lingers in the neighborhood". Aside from bringing up seven of her own children, she took in the four children of her husband's sister, Harriet, after her second husband had left her financially ruined and she died in England in the vain hope of seeking redress.

In Henry W. Livingston's will - subject to a life interest granted to Mary - he conveyed the estate to his eldest son, Henry, who was married to one of the daughters of the Franco-American slaver, Francis de Pau. In 1848, to pay off his debts, Henry willed the house to his brother-in-law, Samuel M. Fox, but as his mother was still alive the sale was delayed until her death. In 1857, Lady Mary's grandson - Henry W. Livingston III - sold the estate as per his father's will to Jacob R. LeRoy for $45,000. In 1862, LeRoy sold it for $50,000 to Fox's son, Samuel M. Fox Jr., who was both Henry III's first cousin and brother-in-law.

The Bell Family of Yonkers

Fox did not hold the property for long and three years later (1865) it was sold out of the family to William Bell of Yonkers who paid a hefty $80,000 for his new home. It was during his tenure that the dining room walls were redecorated - most unusually - with newspaper pictures. William was a son of Abraham Bell, founder of Abraham Bell & Co., a Quaker shipping and commission merchants based in New York City. In 1882, the bank foreclosed on the property and William's brother, James Christy Bell, bought it at auction. James' wife, Harriet, was a daughter of another prominent Quaker, Philip E. Thomas, the first President of the Baltimore and Ohio Railroad and "Father of American Railways".

Mrs J.C. Bell died in 1902, and three of their children (John, Philip and Elizabeth) continued to live at The Hill until 1929 when their niece, Mary, and her husband, Edward A. Fitch, bought them out and became the sole owners. The Fitches divided their time between Yonkers and The Hill, maintaining the latter as a summer home. Mrs Fitch died in 1963 and it was still in private hands when it was added to the National Register of Historic Places in 1971. Nonetheless, the following year (1972), this beautiful and historic home was subject to arson at the hands of a developer and burned to the ground.

Landscape Gardens on the Hudson, A History By Robert M. Toole