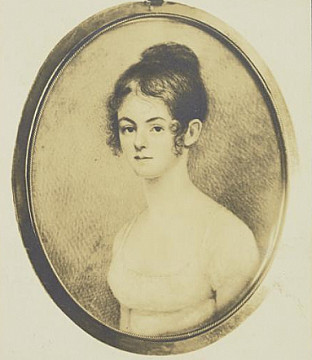 She was born at Trout Hall in Allentown, Pennsylvania, one of the three beautiful heiresses of James Allen and a granddaughter of Chief Justice William Allen. She was educated at Mrs Pine's - widow of the British society portraitist Robert Edge Pine - School in Philadelphia where she was a contemporary among others of Thomas Jefferson's daughter, Polly. In 1796, Mary married Henry Walter Livingston, a grandson of Robert Livingston, 3rd Lord of Livingston Manor in New York. On 23rd December, 1803, Mary and Henry were dinner guests of President Jefferson's at the White House.

From 1799, the Livingstons lived at The Hill but her husband died only a few years later leaving her, with no business experience, in charge of a large estate at a time when tensions were running high with tenants. Her fortitude and fairness led her to be remembered as, "a remarkable woman" and it was, "by her personality and activities" that she made the house famous so that even 100 years later, "the memory of her still lingers in the neighborhood". Among those entertained by the Livingstons at The Hill included: Louis-Philippe, who would later be crowned the last King of France; the Marquis de Lafayette; Granville Penn; and, Joseph Bonaparte, former King of Spain, who remained for several days with his daughters and an entourage of 40 servants! Years later in Italy, on his deathbed at the Palazzo Serristori, Bonaparte met with one of Mary's daughters and told her: "Your mother should have been a queen!" Aside from bringing up seven of her own children, she took in the four children of her husband's late sister, Harriet.