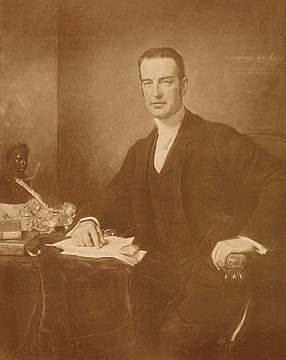 He was born at New Dorp, Staten Island. He was the eldest child of Billy Vanderbilt and from an early age displayed a hard work ethic which immediately endeared him to his self-made grandfather, the legendary railroad magnate, Cornelius Vanderbilt I. At sixteen, he began his career as a clerk with the Shoe & Leather Bank, New York City. In 1863, he joined the Kissam Brothers bank but four years later his grandfather brought him into work for the family's railroads, placing him as assistant treasurer with the New York & Harlem Railroad. By 1880, he was Vice-President and succeeded his father as President in 1886, holding that position until his death. From 1883, he was also Chairman of both the New York Central and Michigan Central Railroads; and, President of the Canada Southern Railroad. From 1886, he succeeded his father as head of the family business and was a director of numerous other companies and charities. Despite all his advantages, Cornelius took his position in the business and social world so seriously that friends remarked he never seemed 'happy'. He suffered his first stoke in 1896. The second in 1899 at his New York home was fatal. He wasn't quite 56.

Cornelius and his wife were both deeply religious and used their position in society to champion stewardship and the responsible use of wealth. He received $5 million from his grandfather and when his father died he and his brother, Willy K., divided roughly $140 million between them, giving them about $70 million each. When Cornelius died, he left $73 million (including real estate of $20 million), though it would have been considerably more had he not made a habit of donating much of his income to various charitable causes. He owned Oakland Farm and built two of America's most spectacular mansions - the Vanderbilt Chateau and The Breakers - but rarely had time to enjoy them.

The Vanderbilts By Jerry E. Patterson