Built from 1703, the house at its core was originally the townhouse of John Sheffield (1648-1721), 1st Duke of Buckingham and Lord President of the Council. It devolved to the Duke's illegitimate son, Sir Charles Herbert Sheffield, who lived here until his wife's death in 1762. That year, he sold "Buckingham House" for £21,000 to King George III who purchased it as a private residence for his wife, Queen Charlotte, and therefore it was initially referred to as the "Queen's House". It was subsequently remodelled and enlarged and by 1791 it was first referred to as "Buckingham Palace," while St. James' Palace remained the official Royal residence. In 1826, George and Charlotte's son, King George IV, collaborated with architect John Nash (1752-1835) to transform what he viewed as a 'comfortable' house into a veritable Royal palace. However, costs spiralled to such an extent that when George died in 1830 his brother, King William IV, replaced Nash with Edward Blore who finished the works on a far more modest scale....
zoom_in 20 images 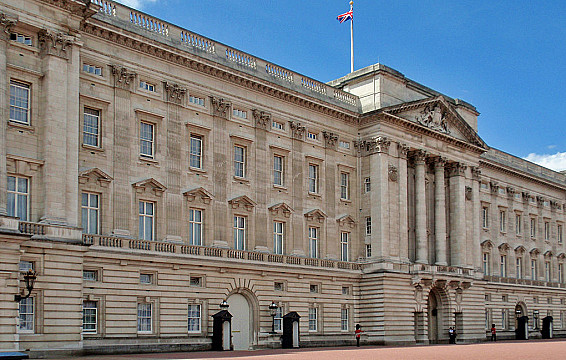 Queen Elizabeth II of the United Kingdom & the Commonwealth

In 1834, the Houses of Parliament in the original Palace of Westminster were destroyed by fire. William IV - who never liked Buckingham Palace - was only too happy to offer it to Parliament as a potential new home. To his dismay, his offer was politely refused. But, three years later in 1837, his niece, Queen Victoria, acceded to the throne and she chose to live at the Palace. From that date onwards, it has served as the official Royal residence.

Queen Victoria added the East Wing in 1847 to accommodate her growing family and larger social events, while blocking off the inner courtyard from public view. Its rather austere facade which is today the commonly recognized front of Buckingham Palace was remodelled in 1913. The Palace measures 355-feet across containing 830,000-square feet of living space. There are 775-rooms including 188-staff bedrooms, 92-offices, 78-bathrooms, 52-principal bedrooms, and 19-state rooms. There is also a post office, cinema, swimming pool, doctor's surgery and jeweller's workshop. Since 1837, Buckingham Palace has been the official Royal residence of the British Monarch, currently King Charles III.

The Other Side of the Coin: The Queen, the Dresser and the Wardrobe By Angela Kelly

The Queen: An Intimate Biography of the Woman Who Ruled an Empire By Julia Baird