Built in 1731, for Major Leonard Vassall (1678-1737) and his first wife, Ruth Gale (1685-1734). Today, this house museum is remarkable for being left completely unchanged since it was home to five generations of the distinguished Adams family from 1787 to 1946. Both Presidents John Adams (1735–1826) and his son, John Quincy Adams (1767-1848), called this house "home". Today, the house makes up part of the "Adams National Historical Park" that attracts about 90,000 visitors a year. The Massachusetts Historical Society stated: "No other house in America has been the home of so many successive generations of political and intellectual leaders, and no restored structures and sites can quite compare with originals that have been altered only by time and are still furnished with the possessions of those who lived there"....
zoom_in 12 images 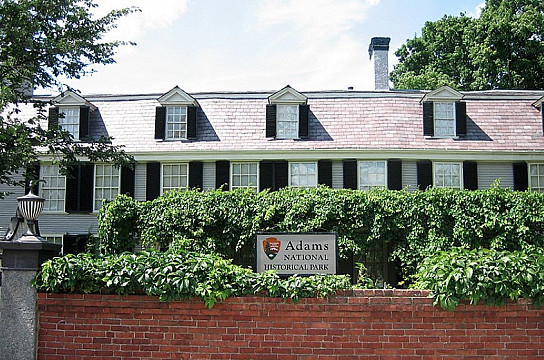 Major Vassall owned a sugar plantation in Jamaica and came to Boston in 1723. Seven years later, he purchased his first plot of land at Braintree - modern day Quincy. The following year, he built himself a summer home on a two-and-a-half story frame house with gambrel roof and separate kitchens with servants quarters. He continued to add to his land at Braintree so by the time he died he owned 60-acres of orchards, meadows, woodland and farmland. He left his property to his second wife, Phebe Penhallow (1694-1775), who in turn gave it to their daughter, Anna, the wife of John Borland (1728-1775).

The Borlands were Loyalists and lived at the historic Apthorp House in Cambridge, only using their summer home occasionally. In 1775, Borland died after falling from his roof while trying to catch a glimpse of an expedition leaving for Hog Island and following the Siege of Boston in 1776, Mrs Borland left for England. Having leased the property during the war, she reclaimed title to it in 1783 and sold it to her son, Leonard Vassall Borland (1759-1801). Four years later (1787), he sold it for £600 to the agents in Boston of John Adams (1735-1826), then resident in England as U.S. Minister to the United Kingdom.

John Adams and his wife Abigail Smith (1744-1818) returned to America in the spring of 1788 to settle into their country home. After life in London, "the wren's nest" as Abigail then called it, was not quite what they had become accustomed to. They set about making improvements to the house until Adams was appointed Vice President.

In 1789, the family moved to Philadelphia and for the next three years they made their home at Bush Hill. But, they returned each summer to Quincy and in 1800 doubled its size by adding a large L-shaped wing in the same style as the original house. In 1796, Adams had named his country home "Peacefield" in consequence of the peace that he had helped broker between England and the United States following the Revolutionary War. They finally retired there in 1801 when Adams ended his tenure as the 2nd President.

At Peacefield, Adams took an active role in the running of the estate and was frequently to be seen in the fields supervising the labourers while also maintaining a voluminous correspondence from his study. Abigail was relieved to enjoy a quieter life and took a great joy in waking at 5am every morning to skim the milk and churn the butter. Despite living on a tight budget, the farm barely turned a profit and for the most part they relied on their savings to live comfortably. Adams outlived his wife and died quietly at his desk at Peacefield, on the same day as the President who succeeded him, Thomas Jefferson.

Peacefield was passed to John's eldest son, John Quincy Adams (1767-1848), while he was serving as the 6th U.S. President. He expressed his thoughts on returning to the house after the death of his parents: "My father and mother have departed... The charm which has always made this house to me an abode of enchantment is dissolved; and yet my attachment to it, and to the whole region round is stronger than I ever felt before".

Unlike his father, John Quincy Adams did not retire from politics when he was succeeded as President of the United States by Andrew Jackson in 1829. He referred to his summer home as the "Old House," a name that would stick with all the succeeding members of the family who occupied it. He is also credited with having planted most of the trees found around the house as seen today. In 1836, he connected the two ells at the rear to the main house by means of a long passage and continued to use the house as a summer home  with his wife, Louisa Catherine Johnson until he died in 1848 at Washington D.C.

Old House was left to their youngest and only surviving son, Charles Francis Adams (1807-1886), the notable U.S. Minister to the United Kingdom whose diplomacy was instrumental to the North's victory in the Civil War. He and his wife, Abigail Brown Brooks (1808-1889) - the daughter of Boston's first millionaire who brought $300,000 to their marriage - kept a townhouse in Boston, but after he turned down the presidency of Harvard University they effectively retired to the Old House from 1868.

The following year, Charles added a 30-foot extension for additional servant's quarters. In 1870 he built the two-story stone Gothic-Revival library that stood separately from the house and was filled with the Adams family collection of 14,000 books written in twelve different languages. His final addition was that of a stone stable, completed in 1873.

Old House Gets a Pulitzer Prize

Old House was left jointly to their five sons; and, in 1906, Brooks Adams (1848-1927) constructed the entrance gates as seen today. Brooks and his brother, Henry, were distinguished authors and historians and they did much of their prolific writing at Old House. The house features prominently in Henry's posthumously-published memoirs, The Education of Henry Adams, that not only won the Pulitzer Prize, but was also voted the best English-language non-fiction book of the 20th century by The Modern Library.

Brooks and his wife, Evelyn Davis (1853-1926), had no children and when not travelling spent their winters in Boston and summers at the Old House. Before Brooks (the longest living of his brothers) died in 1927, he expressed an earnest desire that Old House should remain as his family had left it, with the idea that it might one day become a museum. To this purpose, he established the "Adams Memorial Society" composed of various nieces and nephews, and under their stewardship the Old House remained in private hands. In 1946, the Society donated the house and all of its furnishings to the National Park Service, to be opened to the public as a museum.

Notable among the family's 18th and 19th century furniture is the cradle that rocked five generations of Adams'; the portraits of George Washington and his wife, Martha Dandridge commissioned by John Adams (1735-1826); an original room panelled in dark West India mahogany by Major Leonard Vassall (1678-1737); the still-working clock bought from Willard of Lexington around 1770; the collection of family canes at the foot of the stairs; two gilt chairs that had belonged to James Madison (1751-1836), purchased by Charles Francis Adams (1807-1886) at a sale of his furniture held at the White House; a zodiacal globe that delighted John Quincy Adams (1767-1848); and, not to mention the many portraits, journals and diaries kept by various members of the family.

Quincy: A past Carved in Stone By Patricia Harrigan Browne