Completed 1764, for Colonel John Tayloe II (1721-1779), and his wife Rebecca Plater (1731-1787). Located in the Northern Neck of Virginia and not to be confused with Mount Airy  in Philadelphia. This truly historic house is the first example in America of a stone Colonial mansion to be built in full Palladian style. It was almost entirely replicated at Mannsfield Hall, built one year later for the Tayloe's eldest daughter. It possesses the oldest surviving orangery in North America and the mansion is still occupied by the same family today. In the 18th century, the Tayloes were among the first to import thoroughbred racehorses into America and the estate holds a prominent place in the annals of American racing. Though a family home, guided tours are available by appointment year-round and guests of the regularly hosted waterfowl and turkey hunts spend the night in the mansion. The beautiful gardens are also available for events....
zoom_in 5 images 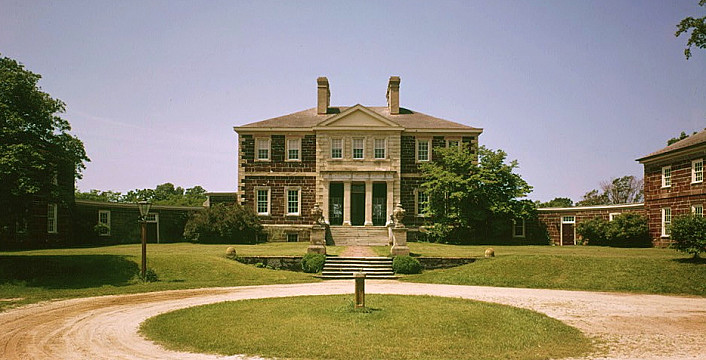 In 1651, Colonel Moore Fauntleroy (1616-1667) extended his existing plantation by acquiring the land on which Mount Airy now stands. In 1682, his son, William Fauntleroy (1658-1686), sold their 3,000-acre plantation to John Tayloe II's grandfather, William Tayloe, who then built the brick house of 20-rooms known as "The Old House". John II's father, John Tayloe I, was an entrepreneurial businessman who was considered to have been among the wealthiest planters of his day and accumulated 20,000-acres in both Virginia and Maryland. On his death, this land and wealth passed to John Tayloe II.

The Tayloe fortune continued to grow in the capable hands of John II. He was prominent in politics and expanded his father's existing ventures, consolidating an ironworks that supplied ammunition to the Virginia Navy during the Revolution, and reviving a shipbuilding firm. By 1748, he began to successfully speculate in land, increasing and consolidating Mount Airy's holdings to 20,000 acres - then worth an estimated £35,000 - while owning a further 20,000 acres in Maryland and elsewhere in Virginia.

At this time, the Mount Airy Plantation was maintained by 327 slaves (including a band of musicians among them), keeping cattle and hogs while predominantly growing tobacco as well as corn, wheat, oats and peas. Aside from agriculture, the plantation contained grist and saw mills as well as supporting a tannery and a blacksmiths.

Sometime prior to 1761, "The Old House" in which John II was born and lived, burned down. For his new mansion he chose a site roughly a mile away, on a small prominence looking west towards the town of Tappahannock and commanding a spectacular view over the Rappahannock River. For the design of his new home, he consulted several architectural books before settling on the idea of something in the Italian Palladian style.

The front of the house was loosely based on Haddo House in Scotland, the home of Tayloe's old school friend, the well-known philanderer George Gordon (1722-1801), 3rd Earl of Aberdeen. It was brought to fruition by the presumed architect, John Ariss (1725-1799), who is also believed to have played a part in the design of Mount Vernon.

The mansion walls are 3-feet thick, made from brown sandstone quarried on the plantation and trimmed with white limestone quoining from nearby Aquia. Extending from the mansion's two-story central block are a pair of long, curved, one-story quadrants that come around to connect to the smaller two-story wings either side, creating the distinct sunken, semi-circular court surrounded by 300 year-old boxwood on which the house is fronted. Leading up to the sturdy front doors within the shade of the limestone and columned loggia are two flights of flagged stone steps flanked by a pair of weathered Grecian urns and statues of "Mountain" and "Muse," the beloved setters that once belonged to one of Mrs Tayloe's brothers, Benjamin Ogle II (1775-1844), of Belair.

The 20-by-30 foot entrance hall of the 10-room house is symmetrical, mirroring at the other end another set of floor-to-ceiling windows and another pair of mahogany doors that open on to the loggia at the back of the house. From the rear loggia, a visitor in the 1770s observed the, "large, well formed, beautiful garden, as fine in every respect as any I have seen in Virginia (and) in it stand four large, beautiful marble statues". Visible from the rear of the house, to the right of these gardens, are the remains of the ivy-clad, red brick Orangery - the oldest of its kind in America. In Peter Martin's book, The Pleasure Gardens of Virginia, he gives an excellent overview of the original gardens:

There was a bowling green (then used to play a game that resembled croquet) which had decorative borders and a variety of shrubs. A greenhouse was built ca. 1790. There was a courtyard with lawns, walks, paths, hothouses, and a tree nursery. The grounds had a kitchen garden (an organic vegetable and flower garden still exists there today), a deer park with cedars and locust trees, orchards, melon beds, flower plots, serpentine walks, a pine tree grove, trimmed hedges, a sunken garden, and an ice house.

Centered around the hall, the reception rooms (library, drawing/music room and dining room) feature 14-foot ceilings, marble floors, mahogany panelling, elegant plasterwork, and magnificent ornamented fireplaces. The previously mentioned visitor in the 1770s found in the dining room, "besides many other fine pieces... 24 (paintings) of the most celebrated among the English race-horses, drawn masterly, and set in elegant gilt frames". Many of the old paintings found at the mansion today once adorned the walls at Belair.

Traditionally, one of the connected wings was used as a kitchen and the other for a nursery and lodging rooms. Original outbuildings still seen today include the stables, counting house, smoke-house and dairy/ice-house.

John Tayloe III and Mount Airy as a Stud Farm

Similarly to other equally wealthy planters of the time in Virginia, John Tayloe II pursued a passion for both breeding and racing thoroughbred horses, marked by the mile-long race track he had built on Mount Airy and the reputation it gained as a stud farm. He and his wife were survived by eight daughters and one son, his principal heir, John Tayloe III (1770-1828). John III also shared his father's fervor for racing, and from 1791 to 1806 the horses he raised at Mount Airy won 113 of the 141 races they entered

John III was educated in England at Eton College and Cambridge University. On returning to the States, he married Ann Ogle (1775-1855), of Belair Mansion, and took control of the Tayloe family interests. His inherited wealth gave him an annual income of some $60,000, which he increased to $75,000 during his lifetime, making him "the wealthiest man of his day" - at least certainly in Virginia. He enlarged Mount Airy and hosted many of the period's most important figures, including his close friend George Washington and others such as the Marquis de Lafayette who gave the Tayloes their first orange tree as a thank-you gift. In 1799, John III built The Octagon House in Washington D.C., where he passed his winters, but otherwise he and his family lived in genteel luxury at Mount Airy with 50 household staff/slaves.

John III's eldest son and heir, Naval Lieutenant John Tayloe IV, predeceased his father at Mount Airy from old wounds sustained during the War of 1812. John III's next eldest son, Benjamin Ogle Tayloe was involved in politics and a socialite who expressed no interest in Mount Airy, living between Washington D.C. and his country home, Petworth. So, when John III died in 1828, Mount Airy fell to his third son, William Henry Tayloe who was married to his first cousin, Henrietta Ogle, the sister of the last Ogle to live at Belair.

In 1844, Mount Airy was gutted by a fire after a maid accidentally dropped a candle in the attic. Much of the furniture was saved and the stone walls stood strong, but the mahogany doors and panelling on the ground floor rooms went up in flames; and, the safe that was bolted to the floor in one of the upstairs rooms crashed its way down into the basement. The repair works were carried out by G & W Van Ness, who at the behest of the owner of nearby "Blandfield" also replaced its 18th century panelling too.

The floors were replaced with wood and the mahogany doors refitted into the house came from the Tayloe-owned Willard Hotel in Washington D.C. The hotel, originally purchased by William's father in 1816 was then being refurbished by his brother, Benjamin.

William and his brothers sold off several thousand acres of their land in Virginia to invest in Alabama cotton plantations and except for a quickly-remedied blip in 1843, the Tayloe family's midas-touch for business continued. William was the wealthiest of his brothers and by 1861 he alone owned 7,831 acres and just under 500 slaves in both Virginia and Alabama. On the outbreak of the Civil War, he put Mount Airy in the charge of his eldest surviving son, Harry, while he left to ensure the safety of his investments in Alabama.

Since before the Civil War, William had leant money to his cousin, George Cooke Ogle, to prop up the ailing Ogle family seat, Belair Mansion. By 1871, George was unable to keep up his repayments. William died in the same year at which point his eldest surviving son and heir (who took over Mount Airy), Harry Tayloe, agreed to buy Belair out of respect to the Ogles and to honor his father's wishes. He co-purchased Belair with another cousin, General Thomas Taylor Munford (1831-1918), and the family portraits and several of the paintings that hung there were gratefully transferred to Mount Airy.

Into the 20th Century

Towards the end of his life, Harry's health was on the decline and the task of managing Mount Airy was gradually taken over by his second surviving son, Henry Gwyn Tayloe (1873-1961), who inherited the estate in 1908. He lived at "Welbourne" with his family while running Mount Airy with his brothers before eventually retiring to his ancestral mansion.
Restored by "Grand Polly"

In 1961, Mount Airy was inherited by Lt.-Colonel Henry Gwynne Tayloe, Jr., (1912-1988), who took up residence there with his wife, Georgia Wallace Montague (1915-2011). The gregarious Colonel and "Grand Polly" (as his wife was known within the family) dedicated their lives to successfully restoring the mansion back to its pre-Civil War glory. It was Polly who first opened the house to the public eye, allowing historical and conservation groups in on special occasions as well as opening the gardens once every four years for 'Historic Garden Week'. Their grandson described his grandparents' tenure as, "a time of Camelot, when they threw grand parties and entertained distinguished guests".

Since 2010, Mount Airy Plantation and its surrounding 1,400 acres has been ably run by the Colonel's grandson, John Tayloe Emery, Sr. and his wife Catherine Bouldin Leitch, who live at the ancestral mansion with their two children. Though still a private family home, the Emerys open the house, gardens, and organic farm for public tours by appointment; and, the grounds are available to hire for all manner of events including hunts, afternoon tea, and most notably weddings - under the Emerys, Mount Airy was voted Top Wedding Vendor, 2013 by Virginia Living. According to that same publication, the east wing is currently lived in by Emery's uncle, Henry Gwynne Tayloe III, while they intend to restore the west wing, "as an inn for historians, archaeologists, photographers, writers and others who may want to study Mount Airy". The Emerys are currently working closely with the Virginia Outdoors Foundation in an effort to protect the farmland forever.

Irons in the Fire: The Business History of the Tayloe Family and Virginia's Gentry, 1700–1860 By Laura Croghan Kamoie

Warsaw By Francene Barber, David Jett, and Brenda Harhai on behalf of the Richmond County Museum

The Pleasure Gardens of Virginia: From Jamestown to Jefferson By Peter Martin

The Kitchen House: A Novel By Kathleen Grissom