In 1066, the Manor of Costessey Hall was gifted by William the Conqueror to Alan Rufus, Earl of Richmond. It came into the possession of the Jerningham family in 1555 when Queen Mary I gifted the manor and its 22 sub-manors to Sir Henry Jerningham (1509-1572), Member of the Privy Council, in reward for his support to place Lady Jane Grey on the throne. He built a new manor house on the south side of the River Tud that flows through the estate. The original manor may have been granted to Anne of Cleves by King Henry VIII and still stands today in Costessey Park....
zoom_in 5 images 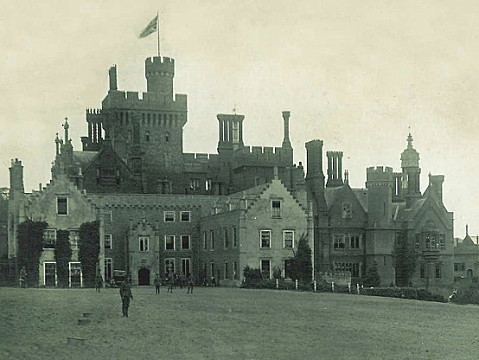 From 1826 to 1836, a vast Gothic castle (which included a chapel) was built around Sir Henry's 16th century manor. In time, the family's fortunes waned and in 1913 its contents were sold. Some of the Heraldic Stained-Glass windows became part of the Dixon Collection at Ronaele Manor. The vast hall stood empty until it was briefly commandeered by the government during World War One, and in 1925 it was demolished. Only the belfry tower remains, next to the 18th hole on the Costessey Park Golf Course.

Gothic Architecture and Sexuality in the Circle of Horace Walpole By Matthew M. Reeve

The Six Wives of Henry VIII By Alison Weir