Built 1870, for J. Frederic Kernochan (1842-1929) and Mary Stuart Whitney (1849-1922). Their famously ornate Italianate villa with French Second Empire mansard roof was a wedding present from Kernochan's brother, James Powell Kernochan (1831-1897), the former Governor of the Metropolitan Club who built Seaview in the same year. In 1888, Edgewater was demolished to make way for Ochre Court....
zoom_in 1 images 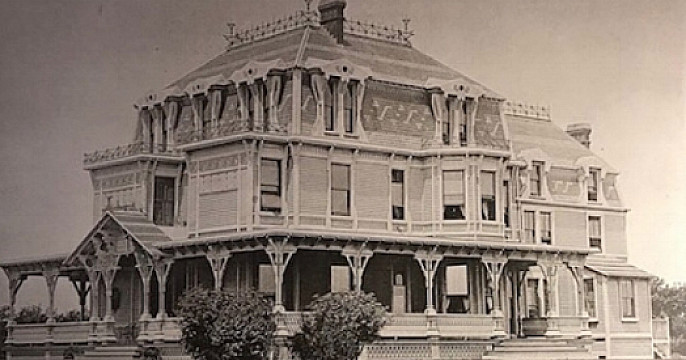 The Kernochan brothers grew up in the lap of luxury in New York. Their father emigrated from Scotland and made a fortune in dry goods before co-founding the University Club of New York. Frederic practised law and was involved with several arms of the family's business interests, perhaps most notably as the President of the Arminius Chemical Company which owned valuable mines in Virginia. His wife, Mary, who he married in 1869 was a grand-daughter of Stephen Whitney, one of New York's five millionaires in 1830. Her first cousin, the Egyptologist Stephen Whitney Phoenix, summered at Harborview.

As a wedding gift, Frederic's brother purchased a plot of land for them at Newport and immediately instructed George Champlin Mason Sr. - who built Seaview for James at the same time - to build “one of the finest villas on Ochre Point" for the newly-weds. The land on which their villa was built measured 721-x-121-feet and was purchased from William Beach Lawrence (1800-1881), Governor of Rhode Island. The site chosen for the villa was literally on the Cliff Walk overlooking the ocean which led to the 18,000-square foot mansion being named "Edgewater" on its completion the following year.

The house was built with 65,000 stones comprised of local fieldstone with granite trimmings. The first floor and wraparound porch was built entirely of stone whereas the second floor was faced with diamond-shaped tiles and the French mansard roof with its iron railings was made of black slate. The interior was designed with hardwood furnishings throughout and included a wide staircase with large newels and balustrades while the walls were layered in polychrome wooden shingling.

In 1881, the Kernochans sold Edgewater to Ogden Goelet for $90,000. Goelet and his family summered there for the next six years until he announced that he would be pulling it down to build the now famous chateau that stands in its place, Ochre Court.