Built in 1870, for James Powell Kernochan (1831-1897) and his wife Catherine Lorillard (1835-1917) whose family built the original Breakers and the still extant Vinland. The Kernochan's summer home was described by The New York Times as, "a beautiful country place" and it contained the resort's first purpose-built ballroom. It was designed by Newport's leading architect of that era, George Champlin Mason. It remained in the Kernochan famiy until 1922 when it was purchased by the whiskey baron  Edson Bradley who incorporated it into Seaview Terrace, remodelled as the east wing....
zoom_in 2 images 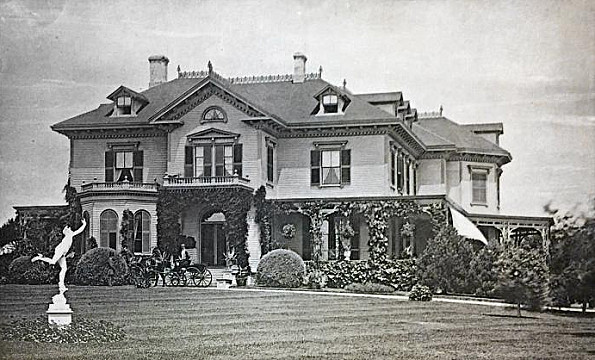 Kernochan was described as a "well-known clubman" of New York. As the Governor of the Metropolitan Club, he was a leader of society and though he undertook various civic duties and kept a watchful eye over his wife's estates, he never pursued a conventional career. His wife, Kitty, was the daughter of Pierre Lorillard III and co-heiress to a fortune.

In 1869, Kernochan purchased an estate in Newport just to the north of By-the-Sea. In that year, he employed the architect of that house, George Champlin Mason (1820-1894), to build separate summer houses for him and his brother, the latter of which resulted in Edgewater, that was later replaced by the far more opulent - and still extant - Ochre Court. The James P. Kernochan house was the first of the Newport 'cottages' to contain a purpose-built ballroom. Constructed of brick and timber with an enriched gabled roof, they named the house "Seaview" for the superb vistas it commanded from its windows.

In 1885, the Kernochans expanded their home considerably and they continued to spend every summer there up until 1896. That year, they had intended to leave for a three year trip to Europe during which time they had arranged to rent the mansion to their friends, the Drexels. As it was, Mr Kerncohan died the following year. After his death, Mrs Kernochan continued to spend every summer at Newport up until her own death in 1917.

His children leased the property to the workwear clothing manufacturer Hamilton Carhartt in 1919 before selling to Edson Bradley (1852-1935) in 1922. By the following year, Bradley had employed the architect Howard Greenley (1874-1963) to incorporate the old house into the east wing of his new sprawling mansion, Seaview Terrace, which still stands today as the 4th largest of Newport's Gilded Age mansions.

The Lighthouse Keeper's Daughter: A Novel By Hazel Gaynor