Completed in 1895, for Maggie Vanderbilt (1845-1924), who by that time had become the widow of the ne'er-do-well Elliott Fitch Shepherd (1833-1893). Since 1911, Woodlea has been the Sleepy Hollow Country Club, but this 140-room mansion on the Hudson River that covers 70,000 square feet was the 15th largest private house in America. Though built entirely with Vanderbilt money, Maggie's husband intended it to be a showpiece for himself - and its colossal size certainly matched his own sense of self! Woodlea was inspired by Kimberley Hall in England, the ancestral home of P.G Wodehouse whose genius created the world's most famous butler, Jeeves. Wodehouse might have had some fun creating a fictional version of Maggie's husband....
zoom_in 20 images 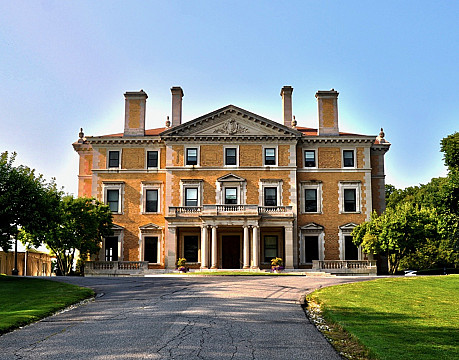 Elliott Shepard was born with two distinct advantages in life: fine chiselled features and a Daddy who printed money - in both senses of the word. Remove those, and it was unlikely that a Vanderbilt heiress would ever have clapped eyes on such a man, let alone married one. The Colonel (a rank won by virtue of looking good on horseback - he declined a promotion that would have seen him in real action!) had a dubious honor placed upon him by The New York Times when it was generously said of him that, "no man (was the) subject of more amusing anecdotes... and (he was) often amusing but always in earnest".

"The Crank of Cranks"

It is one thing to be hapless in business, but any charm that may elucidate quickly turns sour when that man's arrogance assumes a right over spending his wife's money and showing it off as though it was something he had worked hard for himself. Maggie's father, Billy Vanderbilt, saw him for what he was and vehemently disapproved of Shepard. When the latter attempted to establish what he called "the bank of banks," Billy famously quipped back, "by the crank of cranks"! And, sure enough, after Billy's death, Shepard wasted no time in using his wife's $12 million fortune - reduced to just $5 million by the time she died in 1924 - to make himself look good.

In 1888, he used his wife's money to buy The Mail & Express which under Shepard quickly became known as the "The Wail & Distress"! He used it like a modern-day trolling blogger, writing whatever he wanted about whoever he wanted, whether it was real or not. He even employed stenographers to listen in to dinner parties held at their house so that he could reprint anything he had learnt or objected to in his broadsheets!

Shepard's only success in business was in the business of convincing his wife he was successful, and that any lapses in his success was bad luck or the fault of others! By doing so he enjoyed a lifetime of casually burning his way through her seemingly endless funds: as long as she had money, he was the star of the show and he could do what he liked. Their home was no exception. Shepard's personal inherited worth was a not inconsiderable $1.3 million, wrapped up in various companies and real estate. But, with Billy Vanderbilt safely buried six feet under, he commissioned a new home (paid for entirely by his wife of course) that cost $2 million... for all to marvel at "his" success!

In 1893, Vanderbilt money bought the 250-acre "Woodlea" estate from J. Butler Wright, a son of Benjamin Wright (1770-1842), the "Father of American Civil Engineering". Of course, money was no object, and so New York's best were employed to see the construction of Shepard's magnificence: McKim, Mead & White were contracted to design the mansion while Frederick Law Olmsted (1822-1903) laid out the gardens.

In reversal to the norm, the mansion was not built to the design of Stanford White - his firm's creative - but instead it was the work of another of the firm's triumvirate, William Rutherford Mead (1846-1928), whose role was usually confined to smoothing out the business side of things. Mead's sister, Joanna Elizabeth Mead (1841-1914) was married to Shepard's younger brother, Augustus Dennis Shepard (1836-1913). A contemporary account of Woodlea that appeared in American Homes and Gardens summed it up:

Immensity is one of the chief characteristics of this great house. Yet it is a beautiful immensity... It is not grandiose nor showy, it is simply grandly large, and large everywhere.

The mansion boasted 65 bedrooms and 70,000 square feet of living space. Woodlea in comparison to other Vanderbilt mansions was the same size as Idle Hour and larger than The Breakers. But, it was smaller than Florham, and half the size of the Biltmore Estate. Karma caught up with the Colonel when he died a year after construction started. In this case, sadly, his arrogance got the better of him when he secretly called a pair of doctors to their townhouse to remove a bladder stone. The medics mis-prescribed the ether and the operation was called to a halt. Four hours later, he was dead.

Maggie saw the construction of the mansion through and used the house as a spring and autumn bolthole (winters were spent on Fifth Avenue, summers in Newport). Aside from a retinue of servants, her entourage consisted of herself, her five surviving children, and her mother, Mrs Vanderbilt, who died while staying at Woodlea in November, 1896.

For the Love of Art and Music

By 1906, the Shepard children had grown up and flown the nest. After her husband's death, Maggie began to put her millions to good use which included paying for everything from the construction to the furnishing of the YMCA on 16th Street. Woodlea's 140-rooms were now rarely if ever filled and in 1906 she sold the 250-acre estate to Archibald S. White (1867-1924) which was to be a wedding present for his new young wife, the actress Olive Celeste Moore (1880-1960). Not helped by having been married to a man like Shepard for so long, Maggie had little sense of money and White took it from her for an absolute steal at an estimated $1.25 million, when it was said to be worth about $5 million.

The Whites made Woodlea their year-round home, and from here the newly minted Mr White (who'd just sold his salt-refining business) intended to dedicate his retirement to art and music. But, his young wife was a former chorus girl and Vaudeville star, and this may have stifled their entree into the cultured world to which Archibald aspired.

Six years later, rather than ditch his wife, they ditched New York for Hollywood and put the place on the market for a perfunctory $165,000. Nonetheless, White did drop his wife just eight years later, stating that his domestic life had become miserable because of her "penchant for the society of 'high class bohemians'" and rather than living on her allowance of $12,000 a year, she was spending four times that, "on herself and her chosen friends... she fed and clothed them and ruled and spent her money like an Empress. She acted like a second Cleopatra, was extravagant and surrounded herself with cheap men - so-called artists, writers, and singers. Some of her guests stole her clothes"! After their divorce, he divided his time between Cincinnati and New York and she moved to Paris where she insisted she had to live, "to suit her artistic temperament".

In 1910, Frank Vanderlip (1864-1937) could not resist Woodlea's bargain price and together with William Avery Rockefeller, Jr. - another neighbour who lived at Rockwood Hall - they snapped it up. The following year (1911), they and others established the Sleepy Hollow Country Club that with 570 members still occupies the mansion today. The house has featured in several movies and TV programmes, including The Greatest Showman, The Good Wife, Pan Am, 666 Park Avenue, Z; The Beginning of Everything etc.

The Woman Before Wallis: A Novel of Windsors, Vanderbilts, and Royal Scandal By Bryan Turnbull