Completed in 1873, for Colonel George R. Fearing (1839-1920) and his wife, Hattie Travers (1849-1931). The Orchard is Newport's oldest chateau, the only mansion of its era built of Milwaukee brick, and today features a sparkling 90-foot long half-moon shaped pool that is one of the largest in Rhode Island. Located just a short walk from the famous Cliff Walk, along with the likes of Miramar and Clarendon Court, The Orchard is one of only a handful of the Gilded Age mansions to have always remained in private hands. More recently, it was the inconspicuous beating heart of the TED Talks....
zoom_in 8 images 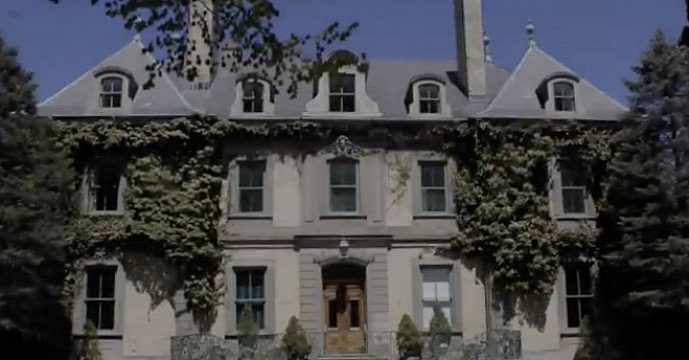 George Fearing was a son of Daniel B. Fearing (1804-1870), a New York merchant banker from Massachusetts who was one of the earliest summer residents at Newport, building Cliffs in 1859. George himself was a well-known society figure and President of the Knickerbocker Club. In Newport, he co-founded the Casino and was the uncle of Mayor Daniel B. Fearing II (1859-1918). His wife, Harriet, was the daughter of the first President of the Saratoga Racecourse and had spent her summers at her parents house on Narragansett Avenue. She was also the aunt of Mrs Kitty (Duer) Mackay who with her husband built another magnificent chateau, Harbor Hill, on New York's Long Island.

In 1871, the Colonel commissioned a French architect to make drawings of a typically French chateau that would then be brought to life by George Champlin Mason (1820-1894) at Newport. The drawings were inspired by an 18th century chateau by Lake Geneva in Switzerland, a couple of miles from the French border. Overseen by Mason to his plans, the chateau was built by Perry G. Case & Co., at a cost of $60,000 over two years.

On completion, local newspapers reckoned the house to be the only one in Newport then built of yellow Milwaukee brick. It was trimmed with Ohio limestone and also featured a Monson (Maine) slate roof - in other words, no expense was spared. It was the first chateau built in Newport and the architectural critic Mariana Griswold Van Rensselaer praised its "positive, distinctly artistic excellence" over the myriad of timber-framed Greek-Revival and heavy Second Empire mansions that otherwise reflected the era.

In 1900, the Fearings took a summer away and leased their home for the season to John Nicholas Brown I (1861-1900) and his new wife Mrs Natalie (Dresser) Brown (1869-1950). Tragically, the young couple would not enjoy their first season in Newport as Nicholas died in May just weeks after the birth of his son. His widow continued to summer at Newport and six years later built another of its iconic chateaux, Harbour Court.

The Fearings had just one son, George R. Fearing Jr., (1871-1956), a pioneer aviator who after graduating from Harvard settled at Boston. When the Colonel died in 1920, he left The Orchard to his son on the premise that his widow "would probably not care to occupy" it. Their son had married Hester Cochrane, a leader of the suffrage movement in Massachusetts, and they kept it for a few years before selling it in the late 1920s.

Blowing in the Reeds

In September, 1938, the deadliest hurricane in the history of New England tore through Newport. The previous year, Verner Zevola Reed Jr. (1900-1986) and his wife "Gaggy" Gladys Agnes Quentell (1901-1966) had built the ocean-facing house now called Seafair. Tragically, five of their servants were swept away that night and another was killed. They never returned to their new home and the following year they purchased The Orchard.

Verner Z. Reed Jr. was heir to a mining and real estate fortune established by his father in Colorado. He and his wife divided their time between The Orchard's 8-acres and their home in Palm Beach. Gaggy died in 1966 and Verner maintained the house until 1975 when he sold it to his neighbour, the widowed Mrs Elizabeth Parke Firestone (1897-1990).

Elizabeth Firestone was the widow of Harvey S. Firestone Jr. (1898-1973), Chairman of the Firestone Tire & Rubber Company that was founded by his father in 1900. Harvey and Elizabeth had enjoyed a long and happy marriage so that when Harvey died, Elizabeth retreated in on herself and took her collecting and wide variety of collections to an almost obsessive level - all meticulously labelled and archived.

The Firestones owned several houses, but Elizabeth preferred Ocean Lawn and made her home there for the next twenty years. She bought The Orchard and Southside both as a buffer from her neighbours and to house her collections of furniture and dresses.
Crabtrees in The Orchard & Robbing Ronald

In 1983, Mrs Firestone sold The Orchard (then reduced to 6-acres) for $900,000 to Freeman Dale Crabtree and his wife Linda, of Oklahoma City. But, less than a decade later, the Crabtrees ran into financial difficulties and were subsequently charged with fraud.

In 1989, the house was purchased at auction for $1.7 million by art investor, Ronald K. Parker. What should have been a sanctuary of peace and safety for him was turned upside down when robbers broke in at 3am, handcuffed him and his partner to the bed, and then ransacked the mansion taking jewellery, cash and several pieces of art.

Wouldn't be seen TED in Newport?

In 1993, Parker sold The Orchard for $2.2 million to the inspirational entrepreneurs Richard Saul Wurman (b.1945) and his wife Gloria Nagy. Wurman is the architect, cartographer and founder of the TED Talks while Gloria is known for her social satires.

The Wurmans bought the house for the house itself, not for Newport, which Wurman has referred to as "an intellectual wasteland without any sense of humour". Many of their friends thought they had gone mad, but nonetheless they chose here over the Hamptons both for price and precisely because they were unknowns in Newport. Subsequently, the study at The Orchard became the headquarters of TED, while staffed from the third floor.

Initially, the Wurmans kept their fashionably rusted wrought-iron gates open, but Newport being Newport, their enticing green lawns soon proved too tempting for picknickers hoping to catch a tour; and, on one occasion they came downstairs to find an immaculately presented mother and daughter in the hall having mistaken their house for Ochre Court - the main reception for Salve Regina University! After twenty happy years in April, 2015, they placed the house on the market for $11 million. It sold just eight months later, but for only a fraction of the original asking price, at just over $1 million.

In September, 2016, barely a year after the Wurmans disposed of the house, The Orchard was sold on again for a quick, tidy profit at $2.5 million on a reduced estate of 4.75 acres.

In October 2018, it was once again on the market for $4.9 million with Sotheby’s International Realty. It was billed as a 14,838 square foot mansion with 14 bedrooms and 17 bathrooms. The interior features the original marble floors and ornamental plaster work. In addition to the main house, the carriage house is divided into two separate guest or staff quarters with five garage spaces and two greenhouses. There are two hot tubs, an indoor pool, and the 90-foot long half-moon shaped pool is one of the largest in Rhode Island. Needless to say, the house did not sit empty for long and has since been bought.

Sudden Sea: The Great Hurricane of 1938 By R.A. Scotti

Rogues' Gallery: A History of Art and its Dealers By Philip Hook