Built in 1811, for John Hunter (1778-1852) and his wife Elizabeth Desbrosses (d.1839), heiress of New York's wealthiest man prior to John Jacob Astor. Hunter had purchased the island that now bears his name (then known as Appleby's Island) in 1804. In 1866, his heirs sold the estate to Ambrose C. Kingsland (1804-1878), the former Mayor of New York who'd flipped Lyndhurst for a profit in order to buy Hunter Island. It was Kingsland who most likely fitted the dormer windows to the top floor. Former President Martin Van Buren (1782-1862) of Lindenwald and Napoleon's brother, Joseph Bonaparte (1768-1844) of Point Breeze, were among the many distinguished guests who stayed here. After a long period of standing empty, the mansion was demolished....
zoom_in 8 images 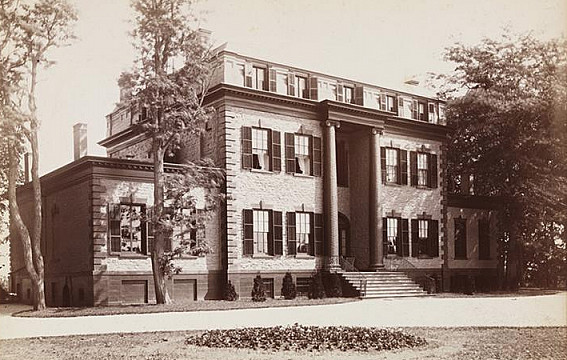 The island was first occupied by the Siwanoy Indians who collected shells here that were used for currency as well as ceremonial purposes. Thomas Pell (1608-1669) acquired the land from them in 1654. The island was then named Pell's Island. It later became known as Pelican's Island and was known as Appleby's Island when Hunter purchased it in 1804.

Dedicated to the Old Masters

In 1810, Hunter had turned his mind to building a summer residence having sold the Auction House started by his father, Robert Hunter & Co., at Pearl and Wall Streets. In 1804, he bought the island for $40,000 from William Henderson, heir of one Dr Alexander Henderson, before spending another $40,000 building his stone and brick mansion. He then spent several more tens of thousands of dollars furnishing its sumptuous rooms that contained Hunter's magnificent art collection of over 400-pieces, then worth $130,000. It included works by the likes of Rembrandt, Rubens, van Dyck, and Leonardo da Vinci.

Built on the highest point of the island, the mansion stood three-stories high surrounded by a spacious verandah and terraced gardens that led down to the shore. The main entrance was flanked by two floor-to-roof Ionic columns facing west towards the mainland. In 1839, the house was described by a visitor as follows:

The building has a vary capacious and well arranged basement floor, containing all the apartments for domestics, underneath which are very extensive cellars. The first floor is divided by a wide and handsome hall; entering at the west door, the first room on the right is the library containing a large and choice collection of ancient and modern works; the grand staircase adjoins the library, and a small passage divides it from the grand dining room, which extends two-thirds the length of the building.  On the opposite side of the hall are the parlor and drawing room, opening into each other.  The entire walls of both these rooms are covered with superb pictures, collected for Mr. Hunter by his agent in Europe... The second story is composed entirely of beautiful bed rooms, dressing rooms, and ante-rooms to complete each suite.  The whole is furnished in the most elegant style of the period... and every wall in the house is ornamented with beautiful paintings.

In its day, aside from the mansion the island consisted only of fields and a couple of farm buildings. The island was guarded by a gatehouse at the foot of a bridge (all built by Hunter) that connected it to the mainland. On the other side, the start of the causeway was marked by two white granite gate posts. Near to these was the Hunter's Island Inn, once the De Lancey Mansion, owned by Hunter's grand-daughter, Elizabeth de Lancey.

Entertaining in Style for the President

When U.S. President Martin Van Buren stayed here for two days in 1839, the New York Herald reported that the he, "occupied an elegant suite in the southeast wing with rose colored silk curtains and rich carpets". In the evening (July 10) Hunter, "hosted a grand dinner for the President served on a magnificent double service of gold and silver plate.  Among the many courses were Calf's brains and Financier pie." The dinner was accompanied by no less than five different Champagnes, seven Madeiras, five varieties of Burgundy and four different Clarets!

From Father-to-Son & the Society of Little Mothers

John Hunter died at his mansion in 1852, leaving the estate to his son, Elias Desbrosses Hunter who immediately took up residence. In 1866, Elias' eldest son, John Hunter III, sold the estate for $127,501 to the former Mayor of New York, Ambrose C. Kingsland (1804-1878), who lived here with his wife, Mary Lovett. The island estate was sold to the City of New York in 1889 for $324,000. The mansion became a children's welfare house known as the "Society of Little Mothers" and it was during this time that it began to fall into disrepair. Having stood empty for several years, it was demolished in 1937. Since then, the area has become part of Pelham Bay Park and is best associated with The Bronx.

If These Trees Could Only Talk: An Anecdotal History of New York City’s Pelham Bay Park By Theodore L. Kazimiroff

The Last Algonquin By Theodore Kazimiroff

The Haunted History of Pelham, New York: Including Ghostly Tales of the Bronx, Westchester County, and Long Island Sound By Blake A. Bell

Red Mill: It's Not How You Start, It's How You Finish By Murray Schwartz