Built in 1859, for John Jacob Astor III (1822-1890) and his wife, Charlotte Augusta Gibbes (1825-1887). In 1854, Astor's father gave J.J and his younger brother a block off Fifth Avenue that they divided between them. His brother, William, built 350 Fifth Avenue next door which his socially obsessed wife, the Mrs Astor, made famous as the beating heart of New York high society, dubbed "the 400". After 1875, cracks began to appear in the relationship of the once close brothers which was then further exacerbated by their wives. The family feud reached boiling point after J.J. Astor died and the house was inherited by his only child, the "prickly" Willy Waldorf Astor....
zoom_in 6 images 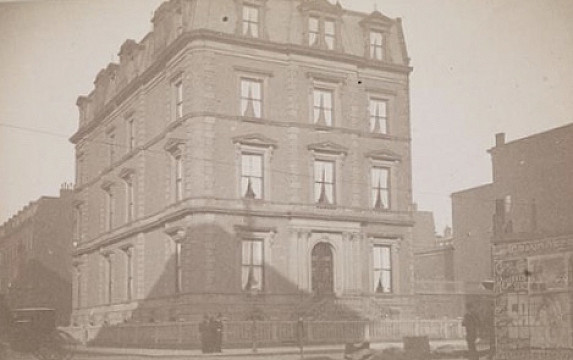 The J.J. Astor House measured 50-x-107 feet and the decorative window dressings, architraves, cornices and Corinthian columns were built with Nova Scotia freestone. A garden with a fountain separated J'J's house from that of his brother's next door.

Having been unsuccessful in politics and tired out by his aunt Lina's fanatical and relentless quest for social dominance, Willy quit America for England where he became the 1st Viscount Astor. As a parting shot at his aunt, he had wished to build New York's largest (ie., smelliest) Livery Stable in place of his childhood home but was persuaded by George Boldt (the builder of the iconic Boldt Castle) that a hotel would make more financial sense. In 1891, No. 338 was knocked down and by 1893 the 13-story "Waldorf Hotel" towered dominantly over his aunt next door as a reminder of who was boss.

In 1895, George Boldt then managed to convince Willy's first cousin, John Jacob Astor IV, of the sense of knocking down his mother's house, No. 350, to replace it with another - taller and grander - hotel, the "Astoria". Lastly, and with every ounce of diplomatic skill he could muster, Boldt succeeded in negotiating between the two warring factions of the Astor family, convincing them of the business sense in joining their hotels to create what would become the iconic "Waldorf-Astoria Hotel". The hotel stood until 1929 when it was razed and replaced by the Empire State Building, found today at No. 338 Fifth Avenue.

Honeybee Hotel: The Waldorf Astoria's Rooftop Garden and the Heart of NYC By Leslie Day