Completed in 1801, for Colonel John Tayloe III (1770-1828), of Mount Airy, and his wife, Ann Ogle (1775-1855). After the White House was left smoldering when the British put it to the torch in 1814, it was the Octagon House that became the temporary residence of James Madison (1751-1836), 4th President of the United States, and it was here that the Treaty of Ghent was signed in 1815. From 1870, the grand house fell into a state of bad disrepair until acquired by the American Institute of Architects. Today, it is a self-guided museum administered by the American Institute of Architects Foundation, and it also said to be one of Washington's most haunted houses....
zoom_in 14 images 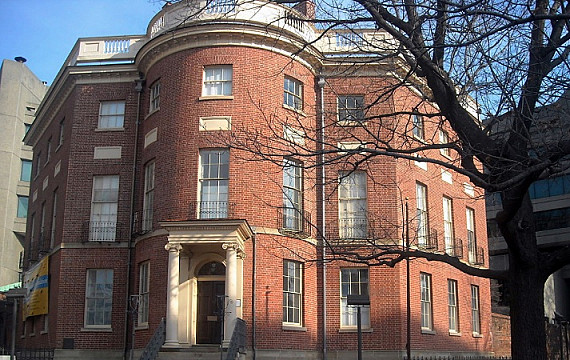 Tayloe grew up in a world of unbridled privilege at his family's plantation in Virginia, Mount Airy, before being sent to England for his education at Eton College and the University of Cambridge. On returning to America in 1791, having turned 21, the inheritance he came into reputedly now made him the wealthiest man in Virginia.

In 1792, the young Tayloe married Nancy Ogle who had spent her childhood at Belair Mansion in Maryland. The following year, the Tayloes decided to immerse themselves in fashionable society and it was John's close friend, George Washington (1732-1799), who drew their attention away from the fashionable cities of Philadelphia and Baltimore, and persuaded them to put the spotlight on Washington D.C. by building there.

Setting a Standard in the New Capital

In 1797, Tayloe paid $1,000 to Gustavus Scott (1753-1800) for a triangular plot of land at the corner of New York Avenue and 18th Street. By 1799, he had employed the architect of the first U.S. Capitol, Dr. William Thornton (1759-1828), to design his townhouse - one of the finest in the country - and work began that year. During its construction, through a combination of expense and its unusual shape, it attracted a great many curious eyes, none more so than George Washington himself who knew something of architecture through his own work at Mount Vernon.

Tayloe named his new home "The Octagon," though in fact it has six sides. The three-story, red brick mansion was completed in 1801 at a total cost of $28,476.82. Its unusual shape incorporating an oval central staircase was, in a similar way to Monticello, a shining example to the young nation of what could then be achieved in American residential architecture. Aside from the Coade stone, all other materials were locally sourced while only decorative elements and furniture were imported from England.

John and Nancy passed their summers at Mount Airy and their winters at the Octagon, where they kept between 12 to 18 slaves, including head coachman Harry Jackson and his wife Winney, Nancy's lady's maid. In 1870, Tayloe's son, William Henry Tayloe (1799-1871), gave a contemporary description of the house as he remembered it to his own son:

Ascending steps with Iron rails to a Portico, there is a large Circular Hall with Marble floor, heated formerly with two Imported Coal Stoves - with a Hat & Coat closet on one side. Passing under an Arch supported by Columns is the main passage with a beautiful Winding Stair way to the top of the house.

Near there between on the right, is the door (mahogany) into the Drawing Room 30 by 20 on 18th Street. A private Stairs run back of the Dining room from the basement to the upper floors. In the basement is the House Keepers room, Store rooms, Wine Cellar, Servants Hall, Kitchen with a Well of fine water and pump in it (at that time).

On the second floor the Circular room over the Hall way, the Library with two closets with Windows. Two chambers over the Dining room & one over the Drawing room, also Linen and Clothes closets. Five chambers & large closets are in the third story. Formerly the roof was flat, with a Wall relieved by Stone work. The view from the top of all Washington City & surroundings with Alexandria in the distance is most beautiful; but the roof leaked... the present roof (is) ugly.

The Garden is inclosed with a Brick wall -with Pillars caped with Stone. In its rear is a two Story House for the Laundry & Servants rooms - the Stable yard paved & in it a Well of good Water. The Stable is a long two Story Building on the back lines of the lots - a commodious Carriage in the Center - the Coach Horse Stable on one side & the Saddle House and Phaeton Horses on the other side. Your GrandFather had his Phaeton & praise (?) & one sometimes two Saddle horses for his own use - in Archy Nashs care. Your Grandmother had the Coach & four Bays with and odd horse in case of lameness. Harry Jackson Coachman. Gowen Lawson Footman.

There is a long brick shed beyond the Stables with Cow Stables. A Horse Box & Mounting rooms - also a Smoke & Meat house. The Ice House is on 18th Street with a Store room over it. The Servants wore Blue Quaker Cut Coats turned up with Red Collars and Pockets gold laced. Red Vests- Breeches, Whitest long stockings, Shoes & Buckles,- in full costume shoulder straps or small Epaulettes.

In politics, Colonel Tayloe was a Federalist and despite being defeated in his run for Congress (1799), he was elected as both a Delegate and Senator to the Virginia Legislature. He was well-known for his passion for thoroughbred racing and established a racecourse at Washington D.C. while serving as President of the Jockey Club. In order to maintain this passion, he purchased a 204-acre farm called "Petworth" that bordered Georgia Avenue, enabling him to bring up his racehorses from Mount Airy.

Calling the Bluff of the British & the War of 1812

In 1814, British and Canadian forces descended on Washington D.C. during the War of 1812. Fearful that his house would be looted or even worse put to the torch, Tayloe asked the French Minister, Louis Sérurier to assume residence. The French Royal flag was duly draped over the front door and Sérurier sent a message to British General Robert Ross to kindly place a guard outside should his troops think of burning it. Ross replied to the minister that the house would be respected as though the French King were there himself! The ruse worked and the Octagon escaped the conflict without so much as a scratch.

With the White House left in ruins, the Octagon was now unequivocally the finest house left standing in the capital. Tayloe respectfully offered its use to President James Madison and his wife, Dolley. They lived here for six months during which time Madison held several cabinet meetings here. In 1815, the Treaty of Ghent that ended the hostilities between America and Britain was signed in the Octagon's circular room above the entrance. Following this event, to celebrate, the Octagon played host to one of the largest parties seen in the early 19th century and even the servants were freely given drinks!

Tayloe died in 1828 and left the Octagon to his two eldest surviving sons, Benjamin Ogle Tayloe (1796-1868) - who was then resident there - and William Henry Tayloe (1799-1871). Their widowed mother, Nancy, continued to occupy the house with several of her daughters, as they always had during the winters. In 1856, the year after Mrs Tayloe died, her sons leased the house and their sisters were forced to move elsewhere. Later that year, Benjamin bought out his brother's half-share in the Octagon for $15,954.

In 1860, Benjamin leased the Octagon to the Cathedral of St. Matthew the Apostle for use by the St. Rose's Technical Institute as a girl's school, before offering it to the Church for $20,000 - which they declined. In 1866, Benjamin leased it to the government for use as the Hydrographic Office. On his death, he left the now somewhat bureaucratic mansion to his two surviving daughters - Eugenia Phoebe Tayloe (1835-1913) and Julia Dickinson Tayloe (1838-1872) - on the rather extraordinary condition that "none of them live in Washington". From this time onwards, the house began to fall into disrepair.

Eugenia outlived her sister and managed by a trust company, the Octagon was leased to a variety of commercial and residential tenants. By 1886, the interior of the once proud mansion had been reduced to the description of "almost squalid".

Rescued by the American Institute of Architects

In 1898, 8 or 10 families were reportedly living here and rubbish was piled four to six feet high in the Drawing Room. This sad demise prompted the American Institute of Architects to seize control of the lease in 1899 before purchasing it from Eugenia in 1902 for $30,000. In the 1970s, it was then described by George McCue in his book, The Octagon (1976):

The house is well built of brick trimmed with Aquia Creek sandstone... The interior is elaborately finished, the doors of the first story being of mahogany... The parlor mantle is made of a fine cement composition painted white. The remains of gold leaf show in some of the relieved portions. Leading into the back hall and dining-room are two secret doors in which the wash-boards, chair-boards, etc. run across the door, being ingeniously cut some distance from the actual door, no key holes, hinges or openings showing on the blind side.

The house was renovated again in 1996 and is fully restored to its former glory. Today. it is owned by the American Architectural Foundation though they have since moved their head office into a larger building directly behind it. In 1960, the Octagon was designated a National Historic Landmark and in 1966 it was added to the National Register of Historic Places. It is open to the public for self-guided tours.

The Octagon: Being An Account of A Famous Washington Residence: Its Great Years, Decline And Restoration By George McCue

Irons in the Fire: The Business History of the Tayloe Family and Virginia's Gentry, 1700–1860 By Laura Croghan Kamoie

Empire of Mud: The Secret History of Washington, DC By J.D. Dickey

The United States Capitol: Its Architecture and Decoration By Henry Hope Reed

Classical Architecture and Monuments of Washington, D.C.: A History & Guide By Michael Curtis

Ghosts of Georgetown By Tim Krepp. Foreword by Louis Bayard

1812: The War That Forged a Nation By Walter R. Borneman