Completed in 1906, for John Shaffer Phipps (1874–1958) and his wife Dita Grace (1876-1957). Situated inland from Long Island's North Shore, Old Westbury Gardens is one of America's most spectacular estates with 173-acres of landscaped gardens, temples, lakes, follies, ponds and wooded enclaves. The house is predominantly furnished with 18th century English antiques and artwork, left as they were from when the Phipps lived here. Both the house and grounds are open to the public today. Available for weddings and events, it is also frequently used as a backdrop to movies. Old Westbury was the inspiration for "the Buchanan estate" in The Great Gatsby (2013), while Beacon Towers was the inspiration for Gatsby's home....
zoom_in 2 images 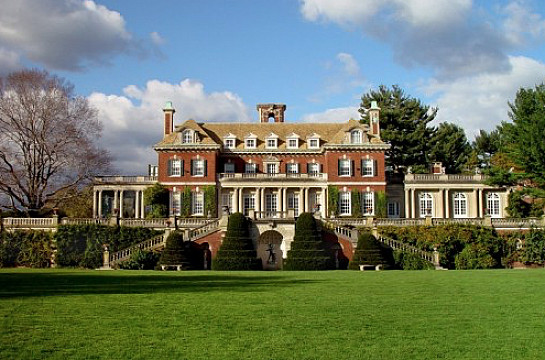 Both Jay and Dita Phipps were born into immense wealth. Jay was a son of Henry Phipps (1839-1930), co-founder of the Carnegie Steel Co., with his childhood friend, Andrew Carnegie (1835-1919). Jay's brother-in-law, Freddie Guest, was private secretary to his distinguished first cousin, Winston Churchill. Dita herself was descended from an old Irish-Catholic family with strong ties to New York, the daughter of Michael Paul Grace (1842-1920), co-founder of the Grace Institute, who was heavily involved in international shipping and banking; and, with her brother-in-law, Richard Hely-Hutchinson (1875-1948), 6th Earl of Donoughmore, owned the world's richest silver mine.

Dita and Jay met in England and were married in 1903 in the Great Hall of her historic childhood home, Battle Abbey. Jay had proposed to her at Beaufort Castle which the Phipps family had taken for a summer of Highland deer stalking. Among the guests that summer was the British artist, George Abraham Crawley (1864–1926). He was not an architect, but Phipps's father had expressed to Crawley his dissatisfaction with the architect he had employed to build the Phipps Mansion in New York. This led to Crawley designing not just the elder Phipp's townhouse, but his son's country estate too.

Jay had returned to the States with Dita and wished to build her a home reminiscent of those she was used to in England. He had purchased this 173-acre lot of land in 1901 and two years later work started on his country mansion as per the designs of Crawley while Dita was instrumental in the landscaping of the surrounding gardens. It was built in the English 17th century Baroque style. The Red Ballroom overlooks the gardens and leads onto the back terrace. Its floor-to-ceiling windows on the west porch can be hydraulically operated to drop into the floor, opening the room up entirely to the elements.

The grounds are entered via the superbly elegant early 18th century gilt and iron gates on Old Westbury Road. In 1918, Crawley came across them in England and had them repaired before being shipped to New York and fitted in 1920. On passing through the gates, the visitor is transported along a magnificent straight alley of towering linden and tilia trees up towards the garden facade of the two-and half story red brick mansion.

The graceful 23-room house contains many splendid features, notably the bookcases in the study that conceal a hidden compartment used by Jay to hide his priceless Stradivari and Guarneri violins. In the dining room hangs an original portrait by John Singer Sargent (1856-1925) of Jay's mother, Mrs Phipps, with her grandson, Winston Frederick Churchill Guest (1906-1982). The other paintings range from the 1600s to the 1800s and include original works by the famous English portraitists Reynolds and Gainsborough.

The house evolved with the family and as the Phipps' children grew up the nurseries were converted into guest rooms and they moved up to third floor. In 1911, a new wing was added to the house containing kitchens, storerooms, a pantry and a new dining room, designed by the architect Horace Trumbauer (1868-1938). Being avid sportsmen, in the grounds the family added a polo field, tennis courts, and a golf course.

Not to detract from the splendour of the house, it is the gardens at Westbury that make this one of the most beautiful and varied estates in the country, reminding the visitor of some of the great English parks laid out by Capability Brown (1716-1783). Dita Phipps was a passionate horticulturalist and with the help of both Crawley and landscape architect Jacques-Henri-Auguste Gréber (1882-1962), they laid out eight distinctly separate gardens comprising some 25 acres nearest to the house: Doubtless she would be thrilled to see how magnificently they continue to be maintained today.

The vast and varied gardens, interspersed with ornamental structures and statues from Greek and Roman mythology, include both the rose garden and 'ghost walk' that were inspired by the gardens at Battle Abbey. The Italianate walled garden contains a summer house, vast terra cotta pots and a lily pond with a semicircular pergola with twin latticed entrances entwined in grapevines. There are trees espaliered in the 17th century style, a boxwood garden with doric columns and a fountain, and a fairytale cottage with a thatched roof where the Phipps girls played. Though the plants and shrubs have been added to and replanted over the years, the principal lines, vistas and proportions have remain the same.

During the Second World War Mrs Phipps invited 30 British children to live with them at the mansion. Jay survived his wife by one year, dying in 1958 and having contemplated the future of the estate in the rose garden, their daughter, Peggy Boegner (1906-2006), decided to open it to the public and with her siblings established The J.S. Phipps Foundation in order to preserve the estate for prosperity. Since then, the house and gardens (as well as Peggy's old home, "Orchard Hill House") have been open to the public and the Foundation hosts a number of events including weddings, guided tours, concerts, car shows and lectures.

The Mansions of Long Island's Gold Coast: Revised and Expanded By Monica Randall

A History of Westbury, Long Island By Richard Panchyk