Completed in 1918, for Alva Erskine Smith (1853-1933), the widow of Oliver Hazard Perry Belmont (1858-1908) and ex-wife of William Kissam Vanderbilt (1849-1920). Located on the Gold Coast of Long Island's North Shore, it was one of the most fantastical of all the Gilded Age castles. In the 1920s, it gained a reputation for progressive thinking concerning feminism and women's rights in America, more so than for lavish parties for which it has otherwise been portrayed. According to The Hollywood Reporter, Beacon Towers was the inspiration for "East Egg" in Baz Luhrman's recent film adaptation of The Great Gatsby (2013), while Westbury House inspired the Buchanan estate. It is also said to have influenced the fairytale castle in The Wizard of Oz (1939)....
zoom_in 15 images 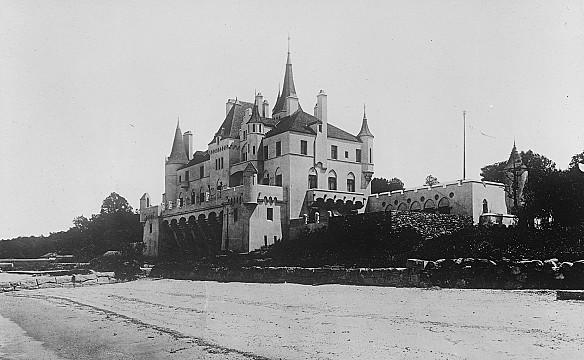 Alva was the charismatic if controversial society hostess who almost singlehandedly led the women's suffrage movement in the United States. She established the Political Equality League, organized the first picketing event in front of the White House and was elected President of the National Woman's Party, a position she held until her death. She was also the owner of some of the best-known houses put up during the Gilded Age, including two of Newport's gems, Marble House and Belcourt Castle.

"My Castle at Sandy Point is far more Authentic..."

To understand Beacon Towers, one must first understand the lady behind it: Alva's friend, Elizabeth Wharton Drexel (1868-1944), recalled in her book King Leah and the Gilded Age (1938), that Alva loved anything "medieval" but had no real clue - and cared even less - about what that period and style exactly entailed: At a dinner party given by the 8th Duke of Atholl at Blair Castle - his family's 13th century ancestral home - Alva turned to Elizabeth and quite un-brazenly remarked: "It's not correct. There are lots of mistakes. My castle at Sandy Point is far more authentic"! Such was the indefatigable Alva - ironically the first female member of the American Institute of Architects! And, her magnificent but highly improbable castle on Long Island was entirely true to her own unique style.
Alva paid $84,000 for 7-acres of prime beachfront real estate at the northern tip of Sands Point on Long Island's North Shore. In 1917, she called on her preferred architectural firm - Hunt & Hunt - to build her a Gothic castle, loosely modelled on a Norman château associated with the Maid of Orléans, Joan of Arc (1412-1481), whose fiery personality Alva had always admired. The Hunt brothers had been trained by their father, Richard Morris Hunt (1827-1895), the same man who had taken an impish joy in styling many features of Alva's original Manhattan residence after the Palais Jacques-Cœur - the home of the wealthiest upstart in 15th century France!
Alva's unorthodox and yet spectacular new home incorporated the styles of medieval French Châteaux and Spanish Alcázars, but was essentially a Gothic fantasy. Rumors abound as to how many rooms it contained, but a conservative estimate would be in the region of 100: In 1929, there were 15 master bedrooms and 12 servants bedrooms.

The castle was finished in pristine white-washed stucco and to maintain privacy, Alva built a stone wall around the estate. In part reference to the old lighthouse that stood adjacent to the property, she named her new home "Beacon Towers". King and Maclean described it in their book, The Vanderbilt Homes (1989):

The desired effect was to awe and overwhelm the eye: The building rose from the beach of Long Island Sound with no lawn to taper and balance its extreme height; rather the building seemed to rise out of the sea itself, reaching five stories into the sky. The house's exterior was left unadorned of embellishments or detailing. Rather, battlements and balconies protruded from it's mighty mass, while turrets, towers and gables rose upward from all directions.

In many ways, the castle did come to rather literally symbolize a fortress from which the battle for women's equality in America was orchestrated. Alva used it to hold regular fund-raising events and meetings, and it became a refuge for those involved with the Suffrage Movement. Black women and immigrants were included in the weekend retreats she hosted, and in 1920 it was the site of the National Woman's Party Conference.

Joan of Arc featured prominently in the castle's decorations: There were murals depicting her struggle, the work of Vincent Aderente who trained under "the dean of American mural painting, Edwin H. Blashfield; a statue of her given to Alva by her second husband for a birthday present in 1902; and, female visitors at the time most often recalled the huge painting on the stairs of the determined heroine of France burning at the stake.

In 1924, to obtain more privacy Alva spent a further $100,000 acquiring an additional 5.5 acres of land that included the old lighthouse and Keeper's House. But, after only seven years in residence, Alva conceded that the castle was too expensive to maintain - the household staff alone cost her $25,000 a year. In 1925, she closed up the castle and removed to France, where she lived at the Château d'Augerville to be closer to her daughter, the recently divorced Consuelo Vanderbilt (1877-1964), Duchess of Marlborough.

In 1927, Beacon Towers was purchased for $400,000 by William Randolph Hearst (1863-1951), who was still busy creating his Californian colossus, Hearst Castle. Beacon Towers was a present for his wife, Millicent Veronica Willson (1882-1974), who had become desirous of a "between-seasons home".

The Hearsts immediately set about making structural improvements to the castle: The roof was raised, dormer windows were added to break the roofline, and all the windows throughout were enlarged to increase both light and air to the interior; and, as huge fans of Hollywood, they added a movie theater. But, they didn't stop there. Hearst literally had an Aladdin's Cave of interior features at his disposal in consequence of his primary building concern - Hearst Castle. From his warehouses, Hearst managed to produce an extraordinary array of items ranging from entire rooms, medieval frescoes, furniture and paintings; all collected on previous trips to Europe.
The Hearsts removed all but one of the superb murals and frescoes relating to Joan of Arc but paid homage to both women by renaming their seasonal home "Saint Joan's Castle". In all, Hearst retrofitted essentially 16 "new" rooms into the castle: five were French, panelled from the periods of the Régence (1715-1723), Louis XV and Louis XVI. One came from the ruins of the Château de Saint-Cloud and another, La Fontaine Room, boasted a 23-foot wide Beauvais tapestry. Other features from France included many paintings, four Gothic hand-carved ceilings, an array of fireplaces - one of which was described as of "extraordinary medieval stone" - and a "Gothic Sculptured Stone Alter Piece".

The Hearsts also incorporated a further six rooms that originally came from Britain and included two 16th century rooms, four from the period of King George I (1660-1727) and two oak panelled rooms with black and white marble fireplaces salvaged from Hamilton Palace in Scotland. The latter two rooms comprised the carved oak living room and the dining room that was decorated with paintings by Sir Joshua Reynolds (1723-1792), and gold consoles and mirrors acquired from a mansion near London. The Great Hall was also decked out with an English feel to it, with suits of armor, a female reliquary bust and a 15th century carved oak figure of a saint.
In 1933, having completed their renovations, the Hearsts hosted a dinner-dance for 2,000 guests who filled the vast stone courtyard within St. Joan's. Guests that night included stars of Hollywood, such as Ethel Barrymore (1879-1959), and the international elite such as Sir Winston Churchill (1874-1965). This was the castle's last hurrah and in 1942 Hearst was forced to handover over his Long Island estate to the bank for tax purposes.

In 1945, the castle was unceremoniously demolished at a cost of $10,000 and 8 houses were built in its place - 6 of which remain, on Sands Light Road. Found among the woods today are various structural remnants, including old towers, the gatehouse (a private residence today), garage and the ruins of the garden walls. In 2004, the co-founder of AriZona Ice Tea, Don Vultaggio, purchased a 2-acre plot of the original estate and with his wife, Irene, completed their 30-room chateau-inspired mansion there in 2007.

The Gold Coast By Nelson DeMille

Consuelo and Alva Vanderbilt: The Story of a Daughter and a Mother in the Gilded Age By Amanda Mackenzie Stuart