Built 1906, for one Thomas Alexander Allan, on 27-acres that had formerly been part of the Vache estate. It was designed by James Edwin Forbes (1873-1955), who built a house for himself nearby. Pollard's Wood was last privately owned by local boy turned circus impressario, Bertram Mills. In 1941, his widow, Ethel, sold it to The Royal Cancer Hospital (now the Royal Marsden Hospital) primarily as a research facility. From 1948, it was used as "a field station for animal breeding" and many subsidiary buildings were added. Since 1985, it has served as the office and laboratory space of various large corporations, most recently as the headquarters of GE Healthcare....
zoom_in 2 images 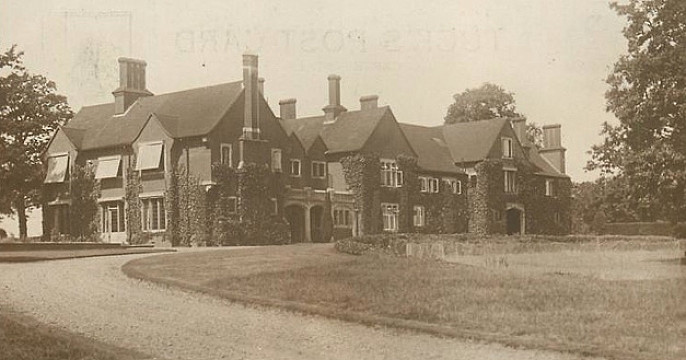 In 1909, Allan leased the house for three years to retired stockbroker David Lionel Thomson who'd previously kept a cottage at nearby Slough. When the lease expired, Allan attempted to sell the house at auction, but it failed to meet the reserve of £12,000. He found a buyer the following year in Sir William Corry (d.1926) 2nd Bt., Chairman of Star Line Shipping, who divided his time between here and 118 Eaton Square, London.

Sir William and Lady Corry lived there for just six years before it was sold (1919) to the trustees (F.D. Outram) of Lady Blanche Smith (d.1922), widow of Colonel Grenville R.F. Smith (d.1917) and younger daughter of the 8th Earl of Kintore. But, she died there just three years later and in 1923 her trustees sold it on to Major Hugh Stanley Montagu Baird (b.1890), formerly of Keppoch in Dumbartonshire.

In 1931, it became the property of circus impressario Bertram Mills (1873-1939) who had grown up on a small farm at Chalfont St. Giles. He was the son of a London undertaker who had pioneered the art of of embalming and later ran stagecoaches between London, Brighton and Oxford. Mills quit school aged fifteen to wash down the stage coaches and tend to the horses they rested on the farm at Chalfont St. Giles. An expert on horses, he won a bet and established the Bertram Mills Circus (1921) that became a household name.

The legendary author Dick Francis was among the many guests to frequent Pollards Wood then. A sight to see at that time was Mills' circus elephants who were transported by train to Little Chalfont and then walked trunk-to-tail along the main street (farmers on hand with spades hoping for a sizeable deposit of manure!) to their winter quarters at Pollard's Wood. All the circus animals wintered there, including the lions, and according to some locals the odd few escaped and lived and bred in the surrounding countryside. There have certainly been several reports - though no capture - of "The Beast of Bucks"!

In 1941, Mills' widow, Ethel, sold the house that by then had 57-acres to the Royal Cancer Hospital (better known today as the Royal Marsden) as a research facility. From 1948, it was used as "a field station for animal breeding" and many smaller subsidiary buildings were added. Since 1985, it has served as the office and laboratory space of various large (usually chemical) corporations, most recently as the headquarters of GE Healthcare.

Bertram Mills - the Circus That Travelled by Train: A Pictorial Celebration of "The Quality Show" By David Jamieson

An Elephant in My Kitchen: What the Herd Taught Me about Love, Courage and Survival By Françoise Malby-Anthony with Katja Willemsen