Completed in 1902, for "Tessie" Theresa Fair (1854-1926), her husband Hermann Oelrichs (1850-1906) and her sister "Birdie" Virginia Fair (1875-1935). Though not on the same scale as The Breakers and others, Rosecliff is widely regarded as one of the most elegant of Newport's Gilded Age Estates and was used to portray Jay Gatsby's mansion in The Great Gatsby (1974). Harry Houdini once entertained guests in the dining room and Louis Armstrong played jazz in the ballroom - the same room that saw Arnold Schwarzenegger and Jamie Lee Curtis dance the tango in the movie True Lies (1994). Today, Rosecliff is maintained by the Preservation Society of Newport County and open to the public for tours and events. It is particularly popular as a wedding venue....
zoom_in 14 images 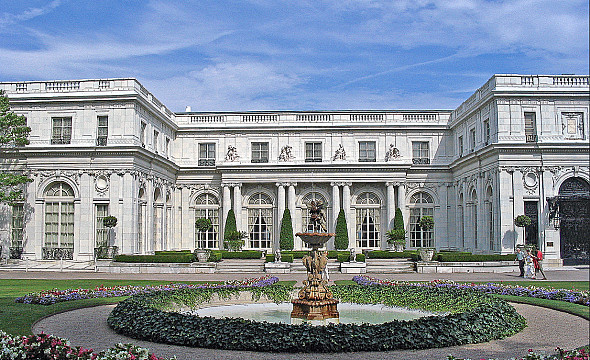 Tessie and Birdie Fair were the daughters of Senator James Graham Fair (1831-1894) and by 1902 they were the sole heiresses to his $40 million fortune. Their father was one of the four Bonanza Kings who made their money in just five years mining Comstock Lode silver in Nevada - the same fortune that funded the equally spectacular Harbor Hill among other mansions. Tessie's husband, Hermann, was a popular figure in New York society, a well-known sportsman - credited for introducing Polo to the U.S. - and an authority on terrapins! His mother was a scion of an old Baltimore family and he was a multi-millionaire in his own right representing his German family's role as agents for the shipping firm Norddeutscher Lloyd that has since become Hapag-Lloyd.

"The Gardens of a Thousand Roses"

In 1891, the newly-married Oelrichs' purchased "Rose Cliff," the former summer home of the noted historian, horticulturalist and statesman George Bancroft (1800-1891), the same man who proposed founding the United States Naval Academy at Annapolis. Built in 1852, Bancroft's Italianate home was surrounded by "the gardens of a thousands roses" - magnificent rosebushes that he had cultivated in pursuit of achieving the perfect American Beauty rose, hence the name of his house set back from the cliffs. The Oelrichs knocked the old house down and increased the estate to 13-acres along Bellevue Avenue.

The lead architect of their new home was Stanford White (1853-1906), who'd just finished renovating their Fifth Avenue chateau, better known as the Mary Mason Jones Mansion; and, it was to be his last major project in Newport. By 1897, it had been agreed that he would model (not copy) their home on the early 18th century Grand Trianon at the Palais de Versailles. Work got underway on their 40-room, H-shaped mansion in 1899 and it was finally completed three years later at a cost of $2.5 million.

Honoring Bancroft, the Oelrichs' maintained the estate's original name, adapting it to "Rosecliff". It was built of brick and the elaborately decorated exterior was faced with terra cotta coated in glazed, white paint. This was designed to appear at its best in bright sunshine, prompting the local press to describe it like, "the surface of a teacup". Though it appears to be only two-stories high, it in fact has four floors (including the basement and one within the balustraded roof) and its principal interior architectural feature is the magnificent heart-shaped double staircase in the marble entrance hall.

Unlike many with pockets as deep as hers, Tessie was mindful that the mansion was just a summer house and though she wanted something that gave a grand impression, she didn't want to spend any more on it than she had to. The materials used were not the highest quality and many of the furnishings and trimmings within were not from 18th century France but were in fact very high standard reproductions made by Jules Allard of Paris.

Tessie preferred parties to objects and this was nowhere better expressed than in her white and gold Louis XVI ballroom, said to be the largest in Newport at 40-by-80 feet, and similar to that at The Elms. In 1900, so eager was Tessie to entertain - and not to be outdone by the end of season ball being held at Crossways - that a whole two years before the house was complete she shooed the workmen out and covering the incomplete sections with palms and ferns, held an impromptu dinner party for 112-guests.

One of Tessie's most memorable and truly Gatsby-esque parties held here was the "White Ball" for the Astor Cup Race in 1904. Guests - some with white powdered hair - and servants alike wore nothing but white; the house was bedecked in white with flowers that included white hydrangeas, roses, orchids, and lilies; white swans swam in the fountain; and, a number of small, white candle-lit boats were built specifically to be placed in the sea, giving the illusion of a far-off flotilla. As the guests arrived they were given gifts at the door: For the ladies, lace fichus from Paris with a Marie-Antoinette design and wreaths of Lilies of the Valley and white roses. For the men, English briar pipes in white cases, white-enamelled silver table ornaments and silver smoking sets, also from Paris. The dance started at 10pm and continued until early morning.

A Pristine Home... for Imaginary Guests!

As Tessie actively threw herself into the social whirlpools of New York and Newport, her more down-to-earth husband retreated back to San Francisco and Baltimore. By the time he died in 1906, they were effectively separated but she was still devastated by his early demise. She continued to divide her year between the Mason Jones Mansion and her home in Newport where she began to spend increasingly more time in her final years.

Tessie ran a tight ship at Rosecliff and became increasingly obsessed with its cleanliness. Every morning at 9am sharp, she ran an inspection of  the entire property (including the garage and stables) and, even mopped the marble floors herself if she felt they were not to standard! According to the New York Social Diary, she "lost her mind in old age, and... spent her days wandering about her mansion, lost in a haze of memories, greeting, and seating her imagined (but non-existent) guests". Tessie died at Rosecliff in 1926.

Rosecliff passed to Tessie's son, Hermann Jr. (1894-1948), who summered here with his "clever and beautiful" wife, Dorothy Haydel (1893-1961), who after his death became Princess Dorothy of Liechtenstein. In 1941, the Oelrichs Jrs sold Rosecliff and auctioned off the most of its furnishings for a combined $65,000. Its new owner was the popular actress and musical entertainer "Gertie" Gertrude Niesen (1911-1975) whose mother bought it on her behalf for $21,000. Gertie was a shrewd customer and immediately leased it for $7,000 a week to a company who were making a film about Tessie's father.

After the film crew left, Gertie used the money to redecorate and refurbish her new home on a grand scale. But, neglecting to hire a caretaker for the winter, she was heartbroken when the pipes burst, "transforming Rosecliff into an ice palace". That year (1942), she sold her sodden mansion for $30,000 to Ray Alan Van Clief (1892-1945) and his wife Margaret Good (1903-1948). Almost immediately afterwards, they acquired the neighbouring estate, By-the-Sea, and after three years of work they made Rosecliff habitable again, changing its name to "Oldcourt". Their luck was not to last either: As Van Clief drove to meet his wife for their first dinner here, he was killed in a car accident.

In 1946, Mrs Van Clief demolished By-the-Sea and blended its gardens with those at 'Oldcourt'. The following year, she sold the mansion with its increased acreage to self-made multi-millionaire J. Edgar Monroe (1897-1991) who immediately gave it back its old name, 'Rosecliff'. His wife, Louise (1898-1989), spent a month at The Plaza Hotel in New York carefully selecting the staff she would hire to re-open her new mansion.
Monroe and his wife were from New Orleans, and it was said that the parties they held eclipsed even those held by Tessie during the height of the Gilded Age - without the strict etiquette attached to any party in those days. They shocked their more conservative neighbours with their annual Mardi Gras celebrations when guests arrived by the carload dressed up in bright satin costumes with sequins and feathers.

The Monroes allowed their summer home to be used for several movies including High Society (1956) and The Betsy (1978). But, most famously, in 1973 Monroe allowed Rosecliff to be used to portray Jay Gatsby's mansion in the classic movie, The Great Gatsby (1974) - Baz Luhrman's more recent remake used a computer-enhanced version of Beacon Towers to depict the Gatsby estate. However, Monroe was furious with the director, Clayton, who had waited for him to go bed before filming the party scene when he encouraged 'guests' to frolic in the fountain - the one thing that Monroe had forbade him to do, and it was trashed again after Monroe had just spent $50,000 restoring it.

In 1971, the Monroes gave the house and its contents to the Preservation Society of Newport County. They also raised $2 million by selling off twelve of its fourteen acres for development which served as the nucleus of a fund with which to maintain it. Rosecliff was opened to the public from 1976 but the Monroes still visited from time to time for charity events etc. up until their deaths. Since then, the magnificent ballroom has featured in the movies True Lies (1994) and Amistad (1997); and, the house appeared in Heaven's Gate (1980) and 27 Dresses (2008). It remains open to the public and in summer hosts the Newport Flower Show and in winter stages The Nutcracker.

The Life & Afterlife of Harry Houdini By Joe Posnanski

The Girl on the Velvet Swing: Sex, Murder, and Madness at the Dawn of the Twentieth Century By Simon Baatz

Turn of the World By Elizabeth Drexel, Lady Decies