Completed in 1897, for Stuyvesant Fish (1851-1923) and his wife, "Mamie" Marion Graves Anthon (1853-1915). In the first decade of the 20th century, Mamie Fish was one of New York's three leading society hostesses and in social status if not necessarily architectural magnificence Crossways shared an importance equal to Rosecliff, Belcourt Castle and Ochre Court. Unlike the other Newport Cottages put up during the Gilded Age by The Four Hundred etc., Crossways was a distinctly original American Colonial-Revival mansion. Today, it has been divided into luxury condos....
zoom_in 15 images 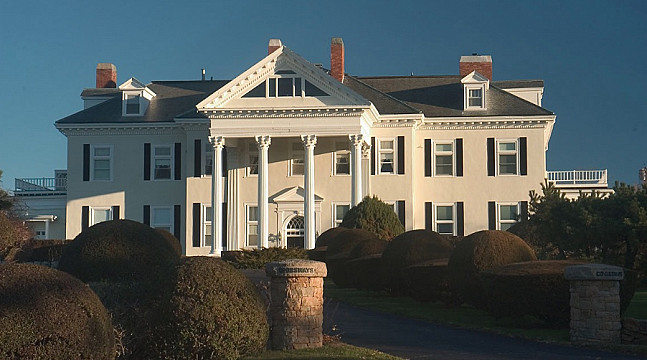 Stuyvesant Fish enjoyed an impeccable background: His father was Governor of New York, directly descended from both Peter Stuyvesant (1592-1672) and William Livingston (1723-1790). He rose to become President of the Illinois Central Railroad and though very wealthy, in comparison to others in the "Four Hundred" he was not one of the super-rich. His wife, Mamie, was a leading hostess of the Gilded Age, known for her rapier wit, her love of a practical joke and her interests in charity and social justice. Stuyvesant and Mamie were extraordinary among their contemporaries for having been childhood sweethearts who remained blissfully devoted to one another throughout their lives.

Mamie thrived on being different and enjoyed her position in society, but having less spare capital than others made "the Fish" - they were never referred to as "the Fishes" - financially savvy and together they made a brilliant team. While Stuyvesant was not fussed by society life, he graciously allowed his wife her fun and amused himself by watching her hold court. When she wished for a house in Newport (in addition to Glenclyffe and their townhouse in Manhattan), he dutifully obliged to build her an ample stage, but one that they agreed must be affordable.

Leaning on Mamie's reputation as a leader of society who went out of her way to go against the grain; on the face of it, it was perhaps no surprise that she built "a distinctively American" Colonial-Revival mansion in stark contrast to the elaborate likes of Marble House, The Elms or the classically English Wakehurst. Under the banner of individualism, patriotism and supporting the local community, the Fish succeeded in building a vacation home on a budget of $100,000 that was equal in size - and to a certain extent internal grandeur - to any of Mamie's society rivals.
Affording Local Luxury

In 1896, Stuyvesant paid $11,000 for a plot of land on a slight hill above Ocean's Drive, the other side of Almy Pond from the decidedly more fashionable Bellevue Avenue. His initial purchase in 1893 had proven to be ill-conceived as it was too rocky on which to affordably build a house. Cutting his losses, he was left with no choice but to extend his existing property - a process that took three years before the vendor agreed with what he considered a fair price. Before work had even started on the house, Mamie had already decided that it would be called "Crossways" in reference to the magnificent views it afforded across both Bailey's and Gooseberry Beach.

Mamie had decided on the name, but it was Stuyvesant who came up with the basic design of the house; afterwards brought to fruition by local architect Dudley Newton (1843-1907). Indeed, the whole house was completed by local tradesmen: the contractor who constructed it was R.W. Curry, of Newport; and, the interior was finished by the Vernon Furniture Company, of Newport.

Crossways was finished by the end of 1897, but it wasn't officially opened until July, 1898, when the Fish gave a formal housewarming by way of an American barn dance. Their white, 40-room Colonial-style mansion resembled one that might have been put up in the Southern States around the mid-18th century. It is centered by four vast corinthian columns supporting a portico and inside it was specifically designed with a mind to entertaining the Four Hundred: the dining room to the right of the large entrance hall could seat 80 guests (her dinner parties featured a 300-piece gold table service) and the Drawing Room on the other side of the hall held 200 guests.

From 1909 to 1912, Stuyvesant and Mamie departed on an extended trip to Europe and down to the Nile, leading to unfounded rumors that Crossways would be sold. On their return, they quashed any such hearsay in surprisingly courtly style and were among the first to open the season in 1912. On July 13, The New York Times reported:

Mrs Stuyvesant Fish began her season of entertaining to-night at Crossways, where Mr and Mrs Fish are occupying their residence for the first time in three years. A dinner for eighty was served, with a dance following. The entertainment was the largest of the season in Newport. Mrs Fish received the guests in the drawing room. The lawn was illuminated, and there were fairy lamps along the roadway and walks. Crossways was a mass of pink rambler roses with a beautiful effect of tiny electric lights. At the conclusion of dinner the guests were bidden into the ballroom by Mrs Fish and there they enjoyed acrobatic dancing by the Russian dancers, Mr Biator and Mlle Hardla, both in evening costume. The guests enjoyed general dancing until midnight, when they departed for home, and thus the ban on Sunday dancing was inaugurated by Mrs Fish.

By 1900, Beechwood was being eclipsed as the center of Newport society. Mamie Fish went out of her way to break the stiff formality that permeated the parties held by the previous generation and she took a delight in enlivening the Newport scene which frequently involved mocking the pretensions of the older school. At Crossways, she assembled a group of Newport's finest on the pretext that they were to dine with the mysterious "Prince del Drago" only to present them to a monkey! She also held a "Dog's Dinner" for one hundred four-legged guests; and, a play she put on was criticized in the press for her attempts to satorize "the fashionable struggle for gentility".

Stuyvesant was amused by his wife's antics, but he did not take a part in her theatricals and instead she frequently colluded with Harry Lehr (1869-1929) to concoct elaborate and sometimes shocking themes for her entertainments. The truth was that Mamie Fish was easily bored. Loathing long, drawn out dinner parties, she pioneered the "50-minute dinner" with footmen constantly racing to clear the plates while champagne was served throughout (rather than a different wine for each course), and she always provided some form of after-dinner entertainment: a particular favorite was the actress Marie Dressler who became a great friend and regular at her dinners.

Her sharp tongue also offended as many as those who delighted in hearing it. On one occasion, a certain well-bred young man who took invitations to the best parties at Newport for granted, was not included on one of Mamie's guest lists. Irked by the snub, he attempted to embarrass her: "I never can remember the name of your house, Mrs Fish. Isn't it Crosspatch?" Without drawing breath, she retorted, "Well, sweet pet, it's a patch you'll never cross". Even her friend Harry Lehr was not safe: a known social climber and generally assumed to be homosexual, in 1901 he duped the wealthy heiress Elizabeth Wharton Drexel (1868-1944) into marriage. Mamie's barbed response to the news was to point out that his favorite flower was obviously the "Marigold"!

By 1913, Mamie felt the need to expand Crossways. The Drawing Room was alleviated of it's duties to double-up as a Ballroom and directly behind it she added what would be the largest room in the house: the new Ballroom was more than double the size of the Drawing Room and could comfortably accommodate 400-guests, which was ideal for her by-now legendary "Harvest Ball" that closed out the Newport season at the end of every August. The second story of the extension was given over to servant's quarters, allowing for further guest bedrooms in the main house.

Mamie died at Glenclyffe in 1915, and it was only after her death that her charitable side was truly revealed. Her servants were particularly fond of her and throwing social conventions to the wind she had happily played cards with her cook in the kitchen. Stuyvesant continued to live between their three homes until he too died in 1923, when their children sold Crossways to Ella Morris de Peyster (1881-1957), a wealthy widow (her first husband died in an elevator crash) and divorcée.

Ella was a well-known collector of 18th century art, many pieces of which are now on display at the Metropolitan Museum of Art. Towards the end of her life she stopped visiting Newport and the house stood empty - an easy target for two men arrested in 1952 for simply helping themselves to a pair of her chandeliers.

On her death, Ella left Crossways to be divided up into apartments for Naval families. She had long been interested in supporting the U.S. Navy who had kept a base at Newport since the Second World War. Later, the mansion was sold to developers who transformed these apartments into luxury condominiums, as found today.

Wicked Newport: Sordid Stories from the City by the Sea By Larry Stanford

What Would Mrs. Astor Do?: The Essential Guide to the Manners and Mores of the Gilded Age By Cecelia Tichi