Built in 1897, for Henry Pratt McKean (1866-1922) and his first wife, Marian Shaw (1866-1958). Designed by the architects Cope & Stewardson, it replaced one of the twin McKean Houses built by his grandfather, Henry Pratt McKean (1810-1894), an identical copy of which stood next door at No. 1925 Walnut Street, on the corner of Rittenhouse Square, in which he had grown up. When his father, Thomas McKean, died in 1898, the following year No. 1925 was purchased by a rising star in the world of American finance, Edward T. Stotesbury. In 1910, shortly before his second marriage that shot him into the highest echelons of high society, Stotesbury doubled the size of his existing home by purchasing No. 1923 from Henry and - maintaining the facades - he employed Horace Trumbauer to reconfigure the interiors, transforming the two house into one home....
zoom_in 5 images 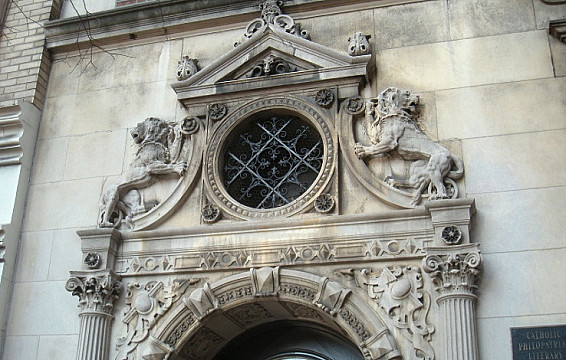 Trumbauer's renovations began in 1911 and included adding a ballroom at the back of the newer building while Joseph Duveen was tasked with refurnishing the house as a whole with mainly 18th century furniture. The total cost of the works came to $1.5 million. In 1921, the Stotesbury's - using Trumbauer and Duveen - completed their most famous home, the 147-room Whitemarsh Hall. Dividing their time between there, El Mirasol in Florida and Wingwood House at Bar Harbor they found themselves spending less and less time in Philadelphia and eventually sold their townhouse in 1926. The older half - No. 1925 - was demolished and replaced by the Chatham Apartment Building while H.P. McKean's half became the new home of the Philopatrian Literary Institute, as it remains today, and the Trumbauer ballroom now serves as a popular wedding and events venue.

The Perfect Square: A History of Rittenhouse Square By Nancy M. Heinzen

Frank Furness: Architecture in the Age of the Great Machines By George E. Thomas