Completed in 1816, for General John Peter Van Ness (1769-1846), Mayor of Washington D.C., and his wife, Marcia Burns (1782-1832), "The Heiress of Washington". At that time in Washington, the Van Ness House was only rivalled in elegance by The Octagon House. The architect, Benjamin Latrobe took inspiration from Middleton Hall in Wales though it also bears a distinct similarity to another of his houses, Ashdown House. Latrobe declared the Van Ness House to be, "the best house I ever designed". However, the double story portico seen in the picture below was added after 1846 by the second owners to make it more reminiscent of the plantation houses in their native Virginia. Standing on an estate of 6-acres, it was located on the block bounded by C Street, Constitution Avenue, 17th Street, and 18th Street. It gained national notoriety late in the Civil War for its involvement in a plot to kidnap Abraham Lincoln....
zoom_in 5 images 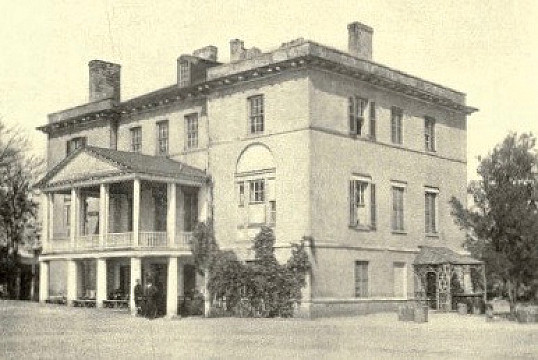 The mansion was built adjacent to Marcia's unpretentious childhood home on farmland on which a third of the new city was built. At a cost of $60,000, no expense was spared and it boasted Italian marble fireplaces, "costly woods" and doors studded with Spanish Azulejo tiles. The partition walls ran down into the cellars that were accessed by concealed trapdoors. One cellar was used as a wine cellar, another as an ice house, and a third as a slave prison. Marcia died in 1832 and her ghost was said to haunt the place, apparently joined from 1846 by six headless white horses drawing her husband's funeral bier! Their only child married Arthur Middleton, heir to Middleton Place, but died in childbirth.

The Plot to Kidnap Lincoln

About four years after Van Ness died, the mansion was purchased by Thomas Green, an attorney from Richmond, Virginia who moved in with his third wife, Anne Corbin Lomax, whose great-grandfather built Mount Airy. The Greens were Southerners through-and-through. Mrs Lomax was a sister of Confederate General Lunsford Lindsay Lomax and when the Civil War erupted all three of their sons joined the Confederate Army. Nonetheless, the Greens themselves were reputed to have taken a bipartisan stance.

In 1864, Sam Arnold was arrested for having instigated a plot to kidnap Abraham Lincoln: the plan was to capture him between the War Department and the White House (which he often walked alone late at night) and then hurry him down through the White House gardens and into the Van Ness House. Its brick walls were so high and well covered by trees and shrubbery that once inside its gardens, "any cries from it would be effectually drowned out long before reaching the street. Once there, they could hide Lincoln in the extensive cellars until they were able to send him across the Potomac (the house stood at its confluence with the Tyber) to John S. Mosby who worked closely with General Lomax.

The Greens had regularly entertained Confederate spymaster Thomas N. Conrad and when Arnold was arrested several further arrests were made at the mansion. The Greens too were thrown into jail, however, after thirty days confinement they were released and exonerated. Nonetheless, their social reputation in the Union's capital never recovered.

Thomas Green lived here until his death in 1883, and his widow returned to their native Virginia. Their house would never be a home again. By 1889, it had passed into the ownership of the heirs of Governor Swann who - to the horror of every cultured soul - had transformed it into a German lager-beer garden! In the late 1890s, it then became a florist’s nursery before becoming the headquarters of the city's street cleaners.

Its last role was as the home to the Columbia Athletic Club. Then, in 1903 it was purchased by George Washington University for $161,000 with the intention of having it transformed into a new campus. But, objections were made owing to its unhealthy proximity to the marshes and in 1907 it was sold for $200,000 to the U.S. State Department. In 1908, it was replaced by the Pan American Union Building.

Lincoln on the Verge: Thirteen Days to Washington By Ted Widmer

A Guide to Civil War Washington, D.C.: The Capital of the Union By Lucinda Prout Janke