Built in 1888, for Major George M. Wheeler (1842-1905), the Explorer and Cartographer, and his wife Lucy James Blair (1853-1902) whose family's home in Washington D.C., Blair House, is today famous as the official state guest house of the Presidents of the United States. In Bar Harbor, the house the Wheelers named "Avamaya" enjoyed a panoramic view over the bay, village and Cadillac Mountain. It was designed by Sidney V. Stratton, of New York City, who was assisted by Frank Quimby. In 1901, while his elder son was building Blairsden in New Jersey, DeWitt Clinton Blair bought and enlarged the house, renaming it "Blair Eyrie". DeWitt employed the same landscape architect responsible for Blairsden's magnificent gardens, James Greenleaf, and between 1903 and 1905 created, "one of Bar Harbor's great early 20th century gardens"....
zoom_in 1 images 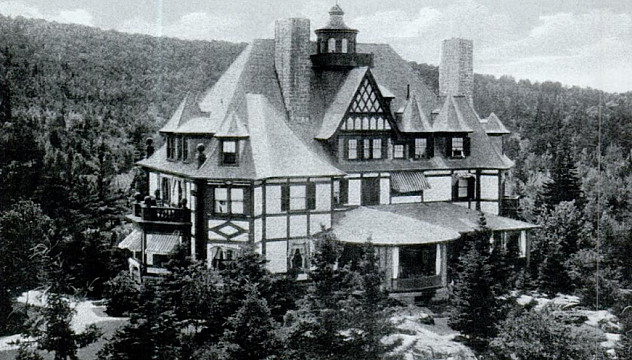 On taking possession in 1901, the Blairs (no relation to Mrs Wheeler's family) employed Andrews, Jacques & Rantoul, of Boston, to make a few external additions while giving the interior a facelift to adhere to the fashions of the period. The Drawing Room was finished in the style of Louis XVI, while an informal sitting room was hung with Indian fabrics and decorated with mementoes from their travels in Egypt and Native Indian baskets.

Outside, two new drives were cut into the hill that scenically wound their way up to the turreted stone and half-timbered house. A teahouse draped in vines was built in the gardens and lumberjacks uprooted mature 50-foot pines from elsewhere and interspersed them throughout the grounds - kept amused by "the whims of the city people".

Greenleaf's real triumph was the 100-by-200-foot Italian Renaissance garden. He transformed what had been, "a rough pile of earth and sand to a garden of beautiful glowing flowers and charming and costly statuary". It was laid out with symmetrical paths and was centered by a bronze Japanese fountain, hand-cast as a dragon sitting in a basin in which large (real) goldfish swam. Mature pines softened by, "arcs of colorful phlox, lilies, dahlias, and hollyhocks" framed the view of Cadillac Mountain, and the sound of the water coupled with the sweet scent of the flowers brought about a calming effect.

The works were complete by the Spring of 1902 and it became a summer home not only to Dewitt and his wife, but also to their sons (Ledyard and John) and their families too. It was demolished in 1935 and in 1976 the Summit House Nursing Facility took its place.

Bar Harbor in the Roaring Twenties: From Village Life to the High Life on Mount Desert Island By Luann Yetter

The Bar Harbor Retirement Home for Famous Writers (And Their Muses): A Novel By Terri-Lynne DeFino