Philanthropist, Educator & Patron of the Arts, of Pittsburgh 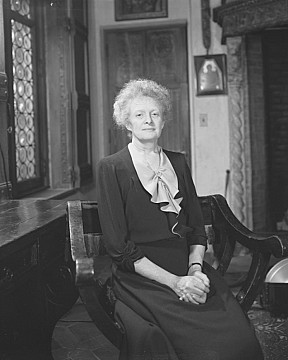 She was born in Pittsburgh, one of the two surviving children of the industrialist and art collector, Henry Clay Frick. She was educated by a Swiss governess at her childhood home, Clayton. From 1905, the family moved to 640 Fifth Avenue in New York and summered at the 104-room Eagle Rock. In New York, Helen continued her education Miss Spence's School for Girls. In 1908, she made her debut in Pittsburgh society but rather than accept a present of valuable jewelry to mark the occasion, she convinced her father to donate 150-acres to the city of Pittsburgh for a children’s park. This marked the beginning of her adult life which she dedicated to almost entirely to philanthropy, not dissimilarly to the daughter of another tycoon, Helen Miller Gould.

The following year (1909), she founded the Iron Rail Vacation Home which was in fact her 21st birthday present, turning down a string of pearls in favor of the farm which provided female textile workers with a retreat. Her other passion was for art history and in 1920 she founded the Frick Art Reference Library in New York, and served as a trustee of The Frick Collection until 1961. She was the driving force behind the creation of the art history department at the University of Pittsburgh, and in the 1960s she funded the construction of the Frick Fine Arts Building there. However, disagreements over its management led Helen to sever ties with the university and in response she built (1970) the Frick Art Museum at Clayton to house her personal collection. She never married and divided her time chiefly between Clayton, Eagle Rock, and Westmoreland Farm at Bedford, New York, which was near to that of Ida Ogilvie's partner, Delia West Marble. Shortly before Helen's death she moved back permanently to Clayton in Pittsburgh where she died.