Built from 1781, for Henry Bathurst (1714-1794), then known as Lord Apsley and the Lord High Chancellor of Great Britain who lived next door at the Neo-Classical Apsley House. Originally a terrace house, he leased 148 to Wilbraham Tollemache (1739-1821), 6th Lord Dysart. After the death of Vice-Admiral John Tollemache (1772-1837) it became better associated with the Rothschild family when the lease was purchased by Lionel de Rothschild (1808-1879). In 1844, Lionel's wife, Charlotte, invited the American showman P.T. Barnum and his sidekick General Tom Thumb here to entertain twenty of their guests which proved to be the catalyst to his hugely successful European Tour, providing the finances for Iranistan, the first example of Indo-Islamic architecture on the American continent. In 1859, Rothschild bought No. 147 and merged the two terrace houses to create one Italianate mansion, finished in 1862 as seen in the picture below....
zoom_in 4 images 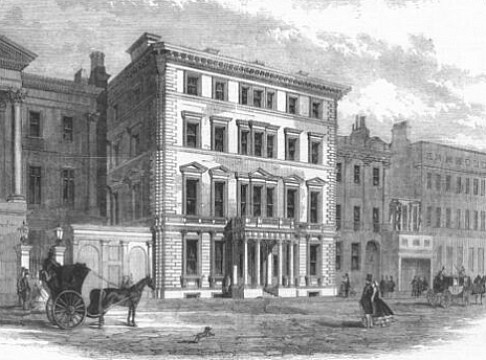 This branch of the Rothschild family divided their time principally between their townhouse in Piccadilly and their country estate, Gunnersbury Park, in Hounslow. In the 1850s, aside from various paintings by Cuyp, De Hooge, Greuze and Wilkie, No. 148 was described as containing, "a noble collection of hanaps, cups etc., of the fourteenth and fifteenth century... rare old china, fine carvings in ivory etc.". Its transformation into an Italianate mansion was done to plans drawn up by Thomas Nelson and Charles Innes. The front portico with double Doric columns opened up into a vast hallway with a "handsome" white marble staircase off from were placed "spacious reception rooms". One critic thought, "the exterior with its ugly plate-glass windows is more commonplace than pleasing. Moreover, it dwarfs Apsley House, which, with all its faults, has a better facade".

After Charlotte died in 1884, the house was inherited by their eldest son, Natty, 1st Lord Rothschild and after his death in 1915 his widow, Emma, continued to live here until she died in 1937. That year, her grandson (Victor, 3rd Lord Rothschild) sold the house and Sotherby's held a three day auction here selling off its valuable contents, "comprising the Superb Dutch and Flemish cabinet paintings; the valuable French XVIII century furniture; the fine carvings, crystal, glass, porcelain, cloisonné, tapestries, chandeliers, and works of art; the sumptuous furnishings". Apsley House (now associated with the Dukes of Wellington) still stands, but No. 148 was demolished to ease traffic congestion in 1972.

Charlotte and Lionel: A Rothschild Love Story By Stanley Weintraub

The Rothschilds By Virginia Cowles