Completed in 1853, for Daniel Parish (1796-1880), of New York City, though best associated with the Astor family. Beechwood is set amidst gardens, fountains and sculptures; set on a promontory surrounded by the ocean, it is the oldest of Newport's Cottages, and said to be the most haunted. Under The Mrs Astor, it became the summer epicenter of The 400, New York's Gilded Age elite, so numbered as this was the number of people the Beechwood ballroom could accommodate. In later years, another Mrs Astor (who survived the Titanic) converted the entire third floor into one vast dressing room. It was while staying here in 1931 that Cole Porter (1891-1964) wrote the famous song "Night and Day" that epitomized the romance of Beechwood's heyday....
zoom_in 8 images 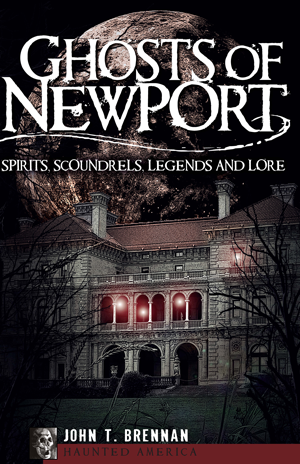 Scandalous Newport, Rhode Island By Larry Stanford
Daniel Parish was a dry goods merchant who lived at the Daniel Parish Mansion on Fifth Avenue. He made over a million dollars in business with his brother, Henry Parish (1788-1856), and they had branches in New York, New Orleans, Savannah and Charleston. They were the nephews of Thomas Powell (1768-1856) who lost his father and brother in tragic circumstances which led him to building a hugely successful freight-forwarding business and gaining large stock interests in railroads, banks, factories, steamships etc.

Beechwood was designed by the English architect Calvert Vaux (1824-1895) who was brought to America by the second collaborator in the project, Andrew Jackson Downing (1815-1852), the famous landscape designer. The 39-room classic Italianate brick building with brownstone quoining and slate roof covered 16,400 square feet and was completed at a cost of $82,000. There was a carriage house and greenhouse, 15 bedrooms and other rooms that included the grand dining room, a library and a music room. The brick stable was duplicated at Algonac in New York, the home of President Roosevelt's grandfather.

Only three years after its completion, a fire gutted the mansion in 1856. Once again, Parish employed Vaux to rebuild his home exactly as it was, with a few minor changes such as adding the crescent-shaped dormer windows and this time situating it closer to the Cliff Walk and a little further away from Bellevue Avenue.

Parish died in 1880 and the following year Beechwood was purchased by the socialites William Backhouse Astor Jr. (1829-1892) and his wife "The Mrs Astor". At a cost of $2 million, the Astors hired Richard Morris Hunt (1827-1895) to renovate the old mansion into a suitable state for entertaining The Four Hundred - the first American social register drawn up by Ward McAllister (1827-1895) and Mrs Astor was comprised from 213 New York families whose lineage could be traced back at least three generations.

The dining room at Beechwood was enlarged to allow 200 people to sit around the table, but most notably Hunt added a vast mirrored ballroom overlooking the water to the rear of the house with bas reliefs depicting Poseidon and Aphrodite. This could accommodate 400 guests. Other renovations included the creation of an ornate, arched, loggia on the south and east sides of Beechwood overlooking the Cliff Walk. It wrapped around the large ballroom and terminated at a glassed-in palm court.

The music room was decorated with wallpaper from Paris and Hunt also added a balustrade that ran along the ridge of the mansard roof. The Astors only spent eight weeks of the year at Beechwood, but when they were there, the house became the center of society at Newport. Mrs Astor was famous for the lavish dinner parties she held and the annual Summer Ball at Beechwood that was the highlight of the social season.

After Mrs Astor's death in 1908, Beechwood was inherited by her youngest son, John Jacob Astor IV (1864-1912), and his first wife Ava Lowle Willing (1868-1958). Soon after redoing the exterior in white stucco as seen today, "Jack" divorced Ava and then scandalized society by marrying the 18 year old Madeleine Talmage Force (1893-1940) in the ballroom at Beechwood. Jack lost his life the following year on the Titanic while they were returning from honeymoon in Europe in order that Madeleine could give birth to their first child in the United States. His young widow, who was younger than his oldest son, inherited Beechwood plus $5 million and it was here that she brought up their only son together, Vincent Astor (1891-1959). She converted the entire third floor into her own enormous walk-in closet and kept the house until her death in 1940.

In 1940, their son, Vincent Astor (1891-1959), sold the house to one of his contemporaries, the wealthy playboy James Cameron Clark (1892-1976). From then until 1980 Beechwood was owned in succession by W. Gurnee Dyer (1903-1974), vice president of the American Museum of Natural History whose uncle, Elisha Dyer IV, kept Wayside further along at 406 Bellevue Avenue; William W. Carey; the English émigré John Page-Blair (b.1901); and, then Richard Merrill. In 1981, Paul M. Madden bought it and carried out extensive renovations while placing the main entrance on Bellevue Avenue.

Under Madden's tenure, Beechwood became a living history museum: Guests could tour the house while professional actors of the Beechwood Theatre Company played members of the household and family friends, giving the guests an insight into how the house was lived in and run during the Gilded Age.

In 2010, Beechwood was purchased by Larry Ellison for $10.5 million. In 2012, he unveiled his plans to fully renovate the mansion to its original state in 1881 in order to house his collection of 18th and 19th century art work in what will be known as the Beechwood Art Museum. The house will also host wedding, gala and corporate events.

Beechwood made an appearance in the 1956 movie High Society, starring Bing Crosby (1903-1977), Frank Sinatra (1915-1998) and Grace Kelly (1929-1982). It has also featured in an episode of Ghost Hunters following reports of candles blowing out by themselves, unexplained cold spots within the house, and footsteps heard on a secret staircase.