Built in 1834, for Captain Edward Armstrong (1800-1840) and his wife, Sarah Hartley Ward (1801-1853). The Armstrongs were among the most refined members of the Horticultural Society of Newburgh. Captain Armstrong was, "a key, formative, and influential acquaintance of and informal mentor" for Andrew Jackson Downing as he integrated himself within Hudson Valley society - Danskammer "affected him profoundly". The Danskammer estate remained in the notably artistic Armstrong family up until the 1970s, but the Greek-Revival mansion was sold in 1874 and was eventually dismantled in favor of profiting from the clay on which it stood. Five of it six columns now stand as a monument at the Storm King Art Center in Mountainville....
zoom_in 5 images 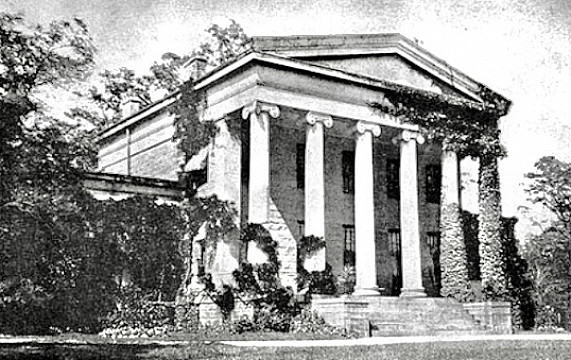 Danskammer Point was first referenced in April, 1640, as "Duyvil's Danskammer" (Devil's Dance Chamber) by David Peterz de Vries when he saw a group of Indians dancing in the firelight on the flat rock that jutted into the Hudson. The rock was lost when the steamer the Thomas Cornell was wrecked here on a foggy night in 1882 and before the brickyard was built some ten years before then, it "was beautiful, crowning a wooded plateau, with a sweeping view across Newburgh bay to the Highlands (with) a delightful bathing-beach of firm white sand... and a dock where large vessels could land. The river was very gay in those pre-railway days, dotted with hundreds of sails, sloops, and schooners...".

Edward Armstrong was the son of a British officer who negotiated a truce with General Washington at Newburgh in 1782. So struck was he with the beauty of the place, he advised his son that if he wished to create an estate, this would be the place to do it.

Edward bought up land from the Ecker family and added to it until he owned 1,000-acres and two miles of riverfront from Roseton to Cedar Cliff. In 1834, slightly back from the river on an elevated plateau of 10-acres, he built this substantial Grecian villa made of granite from Breakneck Ridge and panelled within with rich black walnut. The six 24-foot Ionic columns and trimmings were made from light granite and were shipped from Quincy, Massachusetts. His son recalled: "I have heard that when the columns were landed at our dock there was a great question as to how to get them up the hill, as they were enormous. They finally drilled holes in the ends and made rollers of the columns themselves, and by attaching a tongue were able to roll them up to the house".

Creating his manor and estate set Edward back some $70,000. There was in fact, "a rather fine colonial building with two wings" here already which he demolished in favor of his Greek-Revival home. But, one of the wings on the old house which is thought to have contained the Dining Room - complete with its ornamental ceiling - was kept and moved back behind the stables, serving for many years as a carpenter's shop.

Just six years later in 1840, all the family caught Scarlet Fever and a few days after the death of his only daughter, Edward died too. His widow was so sick that she could not be informed of their deaths until she was strong enough to receive the heartbreaking news. Nonetheless, she continued to live here throughout the year with her five sons. They kept horses and many dogs including, "Jet, a beautiful black pointer... bred from dogs belonging to Joseph Bonaparte." Mrs Armstrong, "was very hospitable and kept open house at Danskammer, most of her guests being our Southern relations. She always kept good horses, and in old times usually drove to Charleston for the winter, with four horses, taking a considerable time for the trip... entertained by her friends all along the way".

In 1849, Mrs Armstrong moved the family into New York City where they took up residence at 12 West Fourteenth Street. That year, Danskammer was rented to Warren Delano who lived here for two years before buying 60-acres from the Armstrongs and building Algonac further along on Danskammer Point which was completed in 1852.

Mrs Armstrong died at New York in 1853 and her (now four) sons then rented the house intermittently to J.C. Bancroft Davis (1822-1907), President of the Newburgh & New York Railway etc. "The Davises were much given to hospitality and kept open house at Danskammer". Like Warren Delano, the Davis' liked it here so much that they bought land from the Armstrongs at Cedar Cliff and in 1868 Richard Morris Hunt built them, "a beautiful house in the style of Fontainebleau, costing about $100,000".

Maitland Armstrong was the youngest son of Edward and Sarah. His eldest brother, William, had chosen to live at the Gomez Mill House on another part of the estate. From 1858, Maitland studied art in France and Italy and was the U.S. Consul-General at Rome in 1873 before returning to the States. He was then starting out on his career which would see him become one of the country's foremost stained glass artists but lacking money he sold the mansion in 1874 to Juan Jacinto Jova (1832-1893), a Cuban immigrant who had established what had proved to be a very profitable brickyard at Roseton.

Although he sold the mansion, Maitland maintained his share of the estate and built "Little Danskammer" here, dividing his time between there and his townhouse at 58 West 10th Street in New York City. During this period, frequent visitors to his country home included Augustus Saint-Gaudens, Stanford White and Charles McKim. He also established the Arrow Brick Co. here, so named for the Indian artefacts he had found when they were excavating the site. His son, Edward, was in charge of its operation and in the first year alone it produced over 5-million bricks before doubling production the following year and from its third year onward it was producing 20-million bricks a year.

Juan and Marie Jova, and the Mansion's Fate

Juan Jacinto Jova came to New York City with his wife, Marie, as a sugar broker and had hoped to grow sugar cane at Roseton but when that failed he built a brickyard instead. Its success enabled him to purchase the Armstrong mansion in 1874 but as the clay pits slowly encroached upon their beloved home, they took the decision to dismantle it in favor of accessing the valuable clay on which it stood. Although long gone, today five of its six columns can still be seen at the Storm King Art Center in Mountainville.

The Architecture of Country Houses By Andrew Jackson Downing

Washington's Headquarters in Newburgh: Home to a Revolution By A.J. Schenkman

Lost Towns of the Hudson Valley By Wesley Gottlcok