Built 1865, for Jay Cooke (1821-1905), "Financier of the Civil War" and his wife, Dorothea Elizabeth Allen (1827-1871). In 1925, Jay's daughter, Mrs Laura Barney, sold the island to Julius Stone who donated it to Ohio State University who still maintain it today. As a research facility, it is not permanently open to the public, but tours of the island which include the castle, can be arranged throughout the year.
zoom_in 5 images 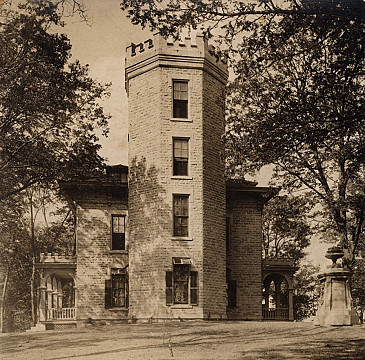 In 1864, Cooke paid $3,001 for the 6-acre Gibraltar Island, near to where he grew up at Sandusky. The following year he built his 15-room summer residence on the island while back in Pennsylvania work had also started on his vast country estate, Ogontz. To the right of the castle, Cooke erected a monument to commemorate Commodore Oliver Hazard Perry's naval Victory over the British on Lake Erie in 1813.

The extended Cooke family came here at least twice every year and though today it is grandiosely referred to as Cooke Castle or the Cooke Mansion, the family themselves simply referred to it as Gibraltar. Jay Cooke said of his summer home,

Many years from now when we old ones are all gone, I suppose my children, grand and great grand children with curiosity and interest - let them all understand that this dear Gibraltar was the gift of God to me and I receive it as such and enjoy it as such.

The great financier was not impervious to mistakes and several bad speculations led to him being declared bankrupt in 1873. He was forced to sell all his property, both Gibraltar and his equally beloved Ogontz, moving in with his daughter Laura to Eildon. Fortunately, Cooke was able to buy Gibraltar back in 1880. The Journal of Jay Cooke or The Gibraltar Records 1865-1905 by James E. Pollard give an excellent description of the joyous times spent here by the extended Cooke family.

Cooke left the island to his eldest daughter, Laura, and all the family continued to spend many happy summers here until 1925. That year, they sold the island to the explorer and industrialist Julius Frederick Stone (1855-1947), who donated it to Ohio State University for Lake Erie research. The laboratory is called the Franz Theodore Stone Laboratory in honor of Julius Stone's father. Cooke Castle has since been declared a Federal Historical Site, and is open to the public by arrangement as a house-museum.