Completed in 1853, for Robert Stayner Holford (1808-1892). It was named for the Earl of Dorchester who first built a mansion here in 1792. Having inherited over a million pounds from an uncle at the age of thirty in 1838, Holford set about indulging his passions for art and literature and needing somewhere to display his increasingly large and valuable collection he asked the architect, Louis Vuilliamy, to create for him, "a private palace of monumental grandeur". From east to west it had a frontage of 104-feet and from north to south 135-feet, giving it a footprint of 14,175-feet. The exterior was modelled after the Villa Farnesina in Rome while the furniture, painted and sculptural decoration, and panelling (most notably the Red Drawing Room) was executed by Alfred Stevens who'd spent nine years in Italy attached to the Academy in Florence....
zoom_in 11 images 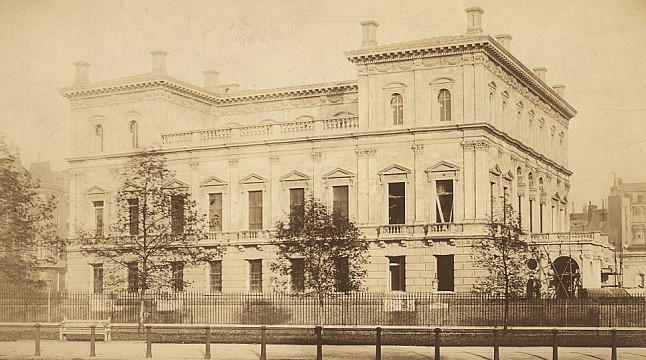 The grand central staircase was modelled after that found at the Palazzo Braschi in Rome. However, the decoration of the house was still incomplete when the Holfords had moved in, and then he did them them the distinct discourtesy by dying on the job in 1875.

In 1905, the Holford's son, Sir George Holford, rented the house to the U.S. Ambassador, Whitelaw Reid, when it was dubbed the "American Embassy". Mrs Reid was the aunt of Beatrice Mills who married the 8th Earl of Granard and when in London they held court at Forbes House in Belgravia. Beatrice had grown up at the Mills Mansion in New York which featured as "Bellomont" in Edith Wharton's book The House of Mirth (1905). The Reids daughter, Jean, was married here in 1908 to Sir John Ward, equerry to King Edward VII, in a wedding said to have been one of the most lavish social events of the epoch.

During World War I, the Holfords transformed the house into a convalescent home for officers and from 1917 it was run by Sir George's adventurous and experienced first cousin, Lady Sybil Middleton. Another of the nurses was Lady Holford's eccentric sister, Muriel Wilson, - a notorious heart-breaker - who finally met her husband here.

Sir George died in 1926 and having no children of his own he left Dorchester House, Westonbirt, and his fortune to his nephew, the 4th Earl of Morley, who promptly sold both houses and the Holford Collection. The Dutch and Flemish pictures alone were auctioned off by Christies in 1928 to a crowd of 10,000-people and fetched £364,094, breaking the world record for a two-day auction. Dorchester House itself was bought by Sir Robert McAlpine & Sons and Gordon Hotels Ltd. who demolished it in 1929 and built the art-deco Dorchester House Hotel which still stands in its place today. Several features were salvaged including Alfred Stevens' marble fireplace from the Red Drawing Room that can now be seen in the Old Refreshment Rooms in the V&A Museum in London. The Grand Central Staircase that cost £30,000 to build, was sold off for just £273.