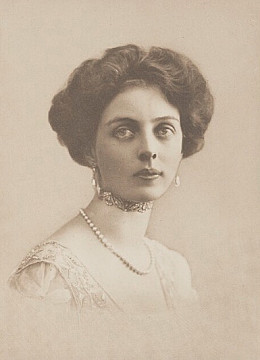 Through her mother, Elisabeth Mills, Jean was a first cousin of Ogden Mills (1856-1929) of the Mills Mansion in New York and the Hotel de Broglie in Paris etc. She grew up between 451 Madison Avenue and her parent's country home, Ophir Hall, today better recognized as Reid Hall at Manhattanville College.

Jean was an “accomplished horsewoman... excellent musician” and fluent in several languages including German and Italian. In 1902, Jean's father was appointed Special Ambassador to the Court of St. James for the Coronation of King Edward VII. Three years later, he was made Ambassador and remained in that position until his death in 1912.

Jean had accompanied her parents to England. In 1908, she married the second son of the 1st Earl of Dudley, Sir John Hubert Ward, Equerry to King Edward VII who was godfather to their eldest child. It was rumored that the King had played cupid and encouraged the marriage. Unlike many English aristocrats who married American girls during this era, Sir John was not poor, having inherited half a million dollars on the death of his father. But, nonetheless, their lavish lifestyle was backed by Jean's millions, aside from her dowry etc., she was given a trust fund of $3 million on the death of her mother in 1931.

The Wards initially lived with Jean's parents at Dorchester House, "the most splendid house in London," leased from the man who introduced them (Sir George Holford) and also where they celebrated their wedding reception. In 1912, Sir John paid £10,000 for the 44,000 square foot London townhouse, Dudley House, that was built for his ancestor, the 6th Baron Ward. They also kept a country estate near Hungerford. For her charitable work during WWII, Lady Ward was made a Commander of the British Empire. Their eldest son, Edward, was Commander of the Household Cavalry and Silver Stick-in-Waiting at the Coronation of Queen Elizabeth II in 1953.