Built in 1832, the original house is encapsulated within the mansion seen today that was remodelled and enlarged in 1895 for Ogden Mills (1856-1929) and his wife, Ruth Templeton Livingston (1855-1920). Sited on a hill commanding a picturesque view over the Hudson River and towards the Catskill Mountains, this genuinely palatial 40,000 square foot mansion still contains its original furnishings as left by the Mills family in 1938. In her book The House of Mirth (1905), Edith Wharton based "Bellomont" on the mansion that is perhaps best known today as the Staatsburgh State Historic Site:

The fragrance of the late blossoms seemed an emanation of the tranquil scene, a landscape tutored to the last degree of rural elegance. In the foreground glowed the warm tints of the gardens. Beyond the lawn, with its pyramidal pale-gold maples and velvety firs, sloped pastures dotted with cattle; and through a long glade the river widened like a lake under the silver light of September. 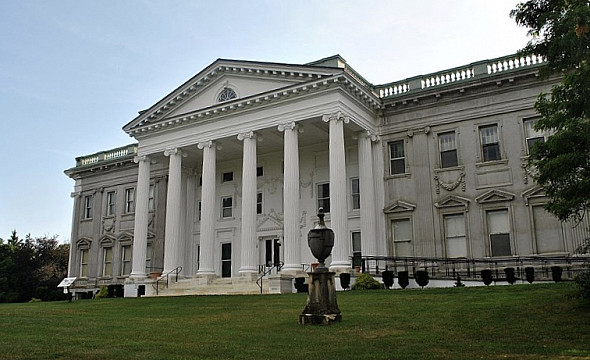 The Lost Lewis Mansion: "As Capacious as it was Ugly"...

From 1795 to 1804, the Lewis' preferred to live at Grasmere which they rented from Gertrude's sister, Mrs Montgomery. They finally took up residence at Staatsburg after Lewis had concluded his term as the 3rd Governor of New York in 1807. Their home was lost to a fire in 1832, but this was apparently no great loss to the region's architectural history as it was said to have been, "as capacious as it was ugly"! In its place, Lewis built a new imposing home within the year in the Greek-Revival style with 25 rooms.

Lewis outlived his wife and when he died in 1844 the house was inherited by their only child and sole heiress, Margaret Lewis (1780-1860) who'd married Judge Maturin Livingston (1769-1847). The Judge died just three years later at which point Margaret divided her property: she gave Grasmere (which had been left to her husband) to their son, Lewis; and, she passed the mansion at Staatsburgh to another son, Maturin Jr.

Maturin and Ruth Livingston had eight children of whom only two twin daughters survived to adulthood: In 1880, Elizabeth Livingston (1860-1943) married a British Member of Parliament, William George Cavendish-Bentinck (1854-1891), and moved with him to England; and, two years later her sister, Ruth Templeton Livingston (1855-1920), married the financier, Ogden Mills (1856-1929), whose father went from Westchester County, New York, in the Gold Rush and made a $36 million fortune in California.

As Ruth was the only daughter to remain in America, the widowed Mrs Livingston gave their mansion at Staatsburg to her and her husband in 1890. Mrs Ruth Mills was very much the haughtier of the two sisters and was acutely aware of her lineage that in her opinion made her better than pretty much anyone else in New York: she is thought to have been the inspiration for "Mrs Trenor" in Edith Wharton's novel, The House of Mirth.

Backed by her husband's millions, the self-deemed impeccably bred Ruth now saw herself as well pitched to topple "The Mrs Astor" as society's leading hostess. Too snobby for her own good (how could anyone not related to her possibly consider themselves New York's best?!), she ultimately failed in her ambition, but back then the first step towards social dominance over the Astors was a palace from which to reign - or, one of five anyway!

In 1895, Frederick William Vanderbilt (1856-1938) bought up nearby Hyde Park, but Ruth foiled this potential adversary by getting first dibs on the services of New York's pre-eminent architectural firm, McKim, Mead & White. Vanderbilt would have to wait.

Rather than demolishing their existing mansion, the architect Stanford White (1853-1906) built the new one around it. He added two wings either side and remodelled the facade with a portico supported by ionic columns, bearing a distinct similarity to Prior Park in England on which Trumbauer later based Lynnewood Hall near Philadelphia.

By 1896, at a cost of $350,000, the Mills' new mansion was complete - two years before Hyde Park. It contained 79 rooms that included 14 bathrooms, 23 fireplaces, its own coal-powered electric plant and central heating. 25 staff were required for the day-to-day running of the household while many more were employed to work on the estate that Mills had increased to 1,600 acres. It now included an extensive working farm and a golf course was laid out behind the house that is still used today: the Dinsmore Golf Course.

This house was just one of five mansions that the Mills family occupied during the course of their year. Their others were in Manhattan, Paris, Newport and California. They came to Staatsburgh in about mid-September - entertaining as many as 80 guests at any one time - and remained there until the end of the Christmas holiday season.

The lavish and elaborate interior is decorated in the Regal styles of 17th and 18th century France, the gem of which is the dining room decorated by Jules Allard et fils, of Paris. Many of the original features were preserved in the old section such as the trims, moldings and many of the fireplaces, but the original reception rooms with their 14-foot ceilings became "smaller" ante-rooms. The new wings incorporated the vast state reception rooms (the dining room and 50-foot long library dominated by the life-size portrait of Mrs Mills' ancestor, General Morgan Lewis) with gilded plasterwork, oak-panelling, ornamental stairways and ceilings that reached a dizzying 20-feet in height.

The blend of styles incorporated old, revival and new, very much characterising the American Renaissance period of the Gilded Age. However, the Mills Mansion is singular in that it retains its original personality through the depth of its furnishings, paintings, Flemish tapestries, Etruscan potteries, chinoiserie, Persian rugs etc. How it is seen today is almost identical to how it was when the Mills lived and entertained here.

In 1929, the widowed Ogden Mills died and left the estate to his only son Ogden Livingston Mills (1884-1937), 50th Secretary of the U.S. Treasury and a horse racing fanatic whose stables bred the legendary Seabiscuit. His first wife, Margaret Stuyvesant Rutherford (1891-1976), was a step-daughter of William Kissam Vanderbilt (1849-1920) and also a ballerina and a member of the cult of "Oom the Magnificent" !

By 1924, Ogden L. Mills had remarried Dorothy Randolph (1889-1968) and they divided their time between New York City and Staatsburgh with her two children by her previous marriage to John Ruckman Fell II (1889-1933), the same man who was found dead only a few years later in Java with a knife plunged into his chest.

From Mrs Phipps to the Staatsburgh State Historic Site

Ogden L. Mills died just eight years after inheriting the family mansion and in 1937, having left no children by either marriage, he passed the estate to his sister, Glady Mills (1883-1970), the society socialite who shared her brother's passion for racehorses. She and her husband, Henry Carnegie Phipps (1879-1953) were well-provided for and had no need for the house nor its furniture. In 1938, she donated the mansion, almost all its contents and 192-acres to the State of New York as a memorial to her parents. From then on it has been open to the public and is known as the Staatsburgh State Historic Site.

Reflections: Staatsburg: "Not Just a Place to Live": A Collection of Interviews with Community Members By Judith Linville

The Hudson River School: Nature and the AmericanVision By Linda S. Ferber & the New-York Historical Society