Built circa 1815, for Colonel Lloyd Noland (1790-1875) and his first wife Nancy Whiting Powell (1793-1825), though several additions have been made since. The 400-acre Glen Ora estate on the Loudoun and Fauquier county line lies 40-miles west of Washington D.C. in the heart of the Virginia fox-hunting country. It is best remembered as being the country retreat of Jackie and John F. Kennedy from 1961 to 1963, but less recalled is that it was here that a 17-year old Wallis Simpson (1895-1986), the future Duchess of Windsor who altered the course of British history, met her "ideal beau". Throughout its history, Glen Ora seems to have aligned itself with women of remark....
zoom_in 8 images 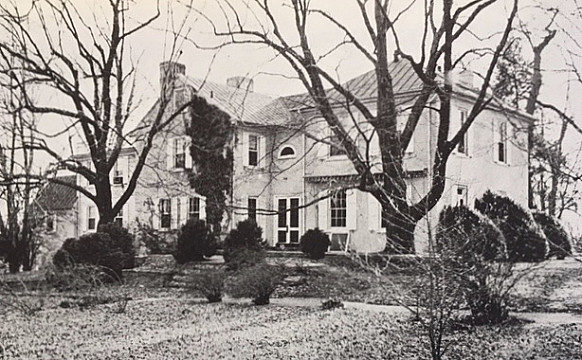 The origins of Glen Ora can be traced back to 1810 when it was developed as a farm on the 3,300-acre patent granted to Raleigh Chinn (1684-1742) back in 1725. From 1763, Lt.-Colonel Leven Powell (1737-1810) purchased considerable acreage from the Chinn family (cousins of George Washington through their mutual descent from the Ball family), 50 of which he developed to establish the town of Middleburg in 1787. Coincidentally, Leven also happens to be an ancestor of the Hollywood star, Katharine Hepburn (1907-2003), and the great-grandfather of the prolific landscape artist, Lucien Whiting Powell.

In 1814, Glen Ora came into the possession of Colonel Lloyd Noland (1790-1875) through his marriage to his first wife, Nancy Whiting Powell (1793-1823), one of Leven's grand-daughters. By 1860, Noland owned both Glen Ora and the neighbouring farm, Hereford, that combined for an estate of 1,180 acres on which he grazed beef cattle. The Nolands were styled "of Glen Ora" and built the core of the old farmhouse found here today. It was Lloyd Noland's second wife, Elizabeth, who first laid out the formal gardens.

From Slavery & the Civil War to Tea & Tennis

Glen Ora became the summer home of Lloyd's daughter, Ella Noland (b.1832), who married Dr John Carrere MacKenzie (1824-1866), of Baltimore, in 1852. Many of Ella's letters have been preserved at the Wilson Library in the University of North Carolina. They recall a slave uprising near Glen Ora in 1856 and the arrest of her husband as a Confederate sympathizer in 1864. She also talks of their gifted enslaved cook in 1849, whose name is hopefully preserved somewhere within the papers:

She is a fine cook... and there were a great many wealthy gentlemen wanting her, said they wouldn't stop at any price. If she had been put up to the highest bidder, such bidding never would have been known in this part of the world.

Glen Ora was passed to the MacKenzie's eldest daughter, Ellen Noble MacKenzie (1861-1926), who married Prosser Tabb (1854-1927), a merchant at Baltimore. In the summers from 1910 to 1913, Ellen's brilliant if somewhat eccentric first cousin, "Miss Charlotte" Haxall Noland (1883-1969) opened her childhood home, Burrland, as a sporting summer camp for girls which was a precursor to establishing Middleburg's now famous Foxcroft School. The girls made frequent trips to Glen Ora for tennis and tea, and of course more riding - there was no such thing as 'enough' riding in Miss Charlotte's vocabulary!

In 1912, one of Miss Charlotte's girls was a young Wallis Simpson (1896-1986), the future Duchess of Windsor who would change the course of British history. But, it was at Glen Ora that Wallis met her first "ideal beau" Lloyd Noland Tabb (1894-1960), "... for two full months of daydreaming, he occupied a permanent place in my affections". It was for the red sports-car driving Lloyd that Wallis studied up and became an expert in football!

Once arrived (we) found a casual, gentle family who seemed devoted to my parents. Cousin Nell (Tabb, Mrs Bangs) was the type who, when I complained of my shoes hurting, told my mother to let me take them off and go barefoot... A very big dog of theirs, whose tail came level with the surface of the dining room table... swished it and knocked off the teacups.

When Nellie died in 1940, her husband moved back to his native New York and put Glen Ora on the market. It was purchased that year by Gladys Rosenthal (1892-1993), of Chicago. Her first husband was the hotel magnate Ernie Byfield (1889-1950). They divorced in 1928 and a year later she married Raymond Tartière (1881-1950), a French banker. They lived between Paris and Washington until war broke out in 1939. Escaping Europe, they settled permanently in Washington and bought Glen Ora as a weekend home.

When John F. Kennedy (1917-1963) won the White House in 1961, Jackie Kennedy had insisted they keep a family home elsewhere. Jackie knew Middleburg well from her childhood having attended several horse shows there while staying with her stepfather, Hugh D. Auchincloss (1890-1976), at Merrywood. Horses and riding were Jackie's escape and she also wanted somewhere for the children that was out of the public eye. Glen Ora was a perfect fit. It took some persuading, but Mrs Tartiere eventually agreed to lease her home on the condition that it was returned to her in its original state.

The 6-bedroom house was then more akin in many ways to a French country house rather than the Federal block it had once been. The Kennedy's furniture was driven down from Georgetown and Jackie's interior decorator, Mrs John Parrish - who famously  helped restore the White House - was hired to refurbish Glen Ora in soft greens, greys, chintz and egg-shell whites. The only room that remained unchanged was the panelled library with Tartiere's rows of French leather-bound first editions. The house was looked after and run by David and Catherine Lloyd, to whom the Kennedys were much attached.

Glen Ora already had stables, a greenhouse, smokehouse, springhouse, tennis courts and a swimming pool. But, for her husband's amusement, Jackie had a 4-hole golf course laid out, teasing him by marking the holes with small Confederate flags!

Glen Ora and Virginia fox-hunting country was very much for Jackie rather than JFK - his preference was for the boisterous energy of the Kennedy Compound at Hyannis Port. But Glen Ora was just 25 minutes by helicopter from the White House (or two hours by car) and provided an out-of-the-way location for several sensitive meetings during the Cuban Missile Crisis. In 1962, they asked Mrs Tartiere if they could buy Glen Ora, but she refused. Instead, the Kennedys bought 39-acres just a few miles up the road from Hubert Phipps (1905-1969), on which they built "Wexford". After some considerable work, Glen Ora was returned to its original state and Mrs Tartiere returned home.

From Ruckus to Retreat

Mrs Tartiere lived here until her death in 1993. She left the now 150-acre estate to her only daughter by Raymond, the wealthy activist Elaine Broadhead (b.1930) who is named for her aunt, the golf champion Elaine Rosenthal. In stark contrast to its previously gentile existence, Elaine turned Glen Ora into a training camp for the "Ruckus Society" which was directly responsible for much of the rioting at the WTO Conference in Seattle.

Elaine's daughter, Misia Broadhead, grew up between Rome and Tuscany in Italy before going to art college in London. However, she frequently returned to America, particularly to see her grandmother at Glen Ora. When Misia married Anthony Barham, her mother gifted her the Glen Ora estate. In the late 1990s, Misia had painted what is now known as "The Monkey Room" at Glen Ora, influenced by her mother's protests against the use of monkeys for cosmetic testing. Misia has since returned Glen Ora to a more peaceful purpose: a place of art and caring for rescued horses, donkeys and potbellied pigs.

The Private Passion of Jackie Kennedy Onassis: Portrait of a Rider By Vicky Moon

The Woman Before Wallis: A Novel of Windsors, Vanderbilts, and Royal Scandal By Bryn Turnbull

Middleburg Mystique: A Peek Inside the Gates of Middleburg, Virginia By Vicky Moon

The Real Wallis Simpson: A New History of the American Divorcée Who Became the Duchess of Windsor By Anna Pasternak

Mrs. Kennedy and Me By Clint Hill & Lisa McCubbin