Built in 1919, for Newbold Noyes Sr. (1892-1942) and his first wife, Alexandra Ewing (1896-1961). During its time, this stunning estate on the Potomac Palisades overlooking the river has entertained four Presidents as well as British Royalty. It occupies land which in the late 18th century once formed part of General "Light Horse Harry" Lee's Salona Plantation and was surveyed by George Washington himself, but today it's famous for a more recent Presidential connection: In 1934, it was acquired by Hugh D. Auchincloss Jr. (1897-1976), adored stepfather of future First Lady Jackie Kennedy (1929-1994) and it was here that she enjoyed an idyllic coming of age, writing: "I always love it so at Merrywood - so peaceful… with the river and those great steep hills". Jackie's stepbrother of sorts, Gore Vidal (1925-2012), centered his book Washington D.C. (1967) around the fictitious 'Laurel House' which was Merrywood, very thinly disguised....
zoom_in 18 images 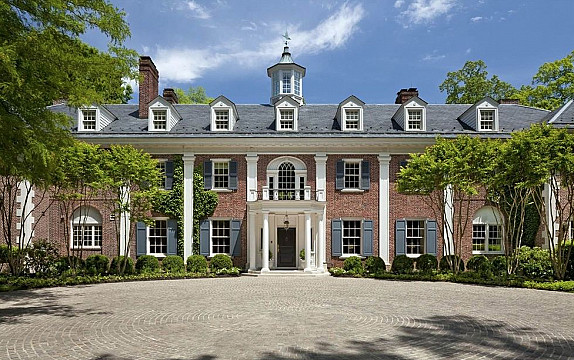 Newbold Noyes Sr. was the Associate Editor of the Washington Star which his father had acquired in 1867, and his family would co-own until 1975. His father, Frank, was the Founder and President of the Associated Press, and his sister, Frances Noyes Hart, was a well-known writer of short-stories. Newbold's first marriage to Alexandra Ewing was not a happy one and its collapse precipitated the sale of Merrywood, their marital home which was said to have been a copy of an 18th century mansion. She then married Thomas Stone and they built the present house on the Boone Hall Plantation in South Carolina.

When Mrs Janet Bouvier married "Hughdie" Auchincloss in 1942, she had two teenage daughters by her first marriage, Jackie and Caroline. Mr Auchincloss' brood was a bit more complicated: He then had three children (Yusha, Nina and Thomas) by two different wives plus a 17-year old Gore Vidal who was his stepson by his second marriage and half-brother to Nina and Thomas. Janet and Hugh then had two children together (Janet and James) and this was the hotchpotch Auchincloss clan who called Merrywood "home".

The future First Lady had spent happy childhood summers at Lasata, the Bouvier estate on Long Island where she had developed her love for horse-riding. Nonetheless, she quickly found Merrywood, "an exciting and lovely place. Every day was wonderful. Horses and animals and so many people all over, so much to do and learn. It was a special time." Meals were prepared by a "very fat cook" called Nellie who took a kindly interest in Jackie's sister (the only one to loathe Merrywood) and the 47-acres of riverside garden, woods and rolling countryside were immaculately maintained by a small team of caretakers who lived on the estate. In this bliss, Jackie enjoyed countless adventures with her beloved horse "Sagebrush," and entered countless more local events. Aside from childish joys such as her first kiss, she also took a real interest in its history.

The 36-room house was "radically" extended to 23,000 square feet, but even back in Jackie's day it was still "enormous" with ivy all but covering what little could be seen of the sun-faded brick. Inside, she poured over old books in front of the fireplace in the library (panelled with black walnut from trees on the estate), and outside she had full access to the shooting range, tennis court, and the huge Olympic-sized (60-foot) swimming pool with its rustic, circular arts-and-craft pool house. The gardens that Jackie knew were landscaped by Edith Wharton's celebrated niece, Beatrix Farrand (1872-1959).

Even after her celebrated marriage in 1953 to John F. Kennedy, whereas Hyannis Port remained his sanctuary, Merrywood remained hers. In 1955, as a direct result of her affections for Merrywood, the Kennedy's purchased Hickory Hill just two miles along the same road. JFK wrote the most part of his Pulitzer Prize-winning book, Profiles of Courage (1957), at Hickory Hill, but he also spent time writing it here too.

In 1959, the Auchincloss' put Merrywood on the market for $850,000, though it would take two years to sell and at a reduced price of $650,000. Despite their ample coffers, it was proving a stretch to maintain both Merrywood and Hugh's childhood summer home, Hammersmith Farm. In 1963, they moved into Washington D.C. purchasing the Auchincloss House in Georgetown. Before Mrs Auchincloss left Merrywood, she made a photograph album of their time there and gave it to her husband with the inscription: "To Hugh D. - A Souvenir of 18 years together at 'Merrywood'. With all my love, Janet".

The new owners of Merrywood were the socially ambitious entrepreneur C. Wyatt Dickerson (1924-2016) and his wife, the pioneering TV newswoman, Nancy Dickerson (1927-1997). They were both leading figures in the capital's glitterati and at Merrywood they held court to a host of leading celebrities of the day: Frank Sinatra; James Stewart; Jack Benny; Governor W. Averell Harriman; Walter Annenberg; Edward Bennett Williams; and, Ronald and Nancy Reagan dined with them in 1981, days before his inauguration.

In 1965, the Dickersons sold 40-acres of the estate for development, maintaining the same 7-acres that still surround the mansion today. This sale no doubt helped fuel the Dickerson's taste for decadence and perfection. They maintained the house immaculately and had gone to the extent of studying antique furnishing in order to ensure that each piece of furniture was just right, and placed in just the right position. As their son later said: "Everything a visitor could see, including the children's rooms, was perfect".

Sadly, the perfections they strove to achieve in the house masked the imperfections in their marriage. In 1981, Wyatt moved out and he and Nancy were divorced two years later. However, for their five children, despite what may have appeared to have been a strained childhood, their son, John, recalled his time there as: "a place of childhood freedom and distracted parents... the house was our fort, a fantasy world out of a children’s book like The Lion, the Witch and the Wardrobe. Parents absent, weaponry handy"!

The "Nouveau Poor"
In 1984, the Dickersons sold their beloved home for $4.25 million to real estate magnate Alan I. Kay (1934-2010) and his wife Dianne Comess. The price tag was then noted as, "one of the largest sums ever paid in the Washington area for a single-family residence".

The Kays "just fell in love with this property". But, whereas the Dickersons had used Merrywood predominantly for their own pleasure, the Kays drew on its historic provenance to help drive fundraisers for the many charities with which they were involved: In 1990, Michael Jackson was here to help the Capital Children's Museum; regular galas were held for the Washington Ballet; but, the cause closest to their hearts was raising money for cancer research in which Alan Kay had tremendous success, notably in his role as Co-Chairman of the annual American Cancer Society Ball.

Like the Dickersons, the Kays were entirely self-made. But again in contrast to the previous owners, where the Dickerson's had a talent for making "new money look old," the Kays made no attempt to varnish their roots and on their sofa was a cushion that read, "Nouveau riche is better than no riche at all"! And, when the property market tanked in the late 1980s, this was replaced by another cushion that simply read: "Nouveau Poor"!

It was the Kays who "radically" extended Merrywood to 36-rooms and built the 5,000-square foot pool house. These changes did not meet with everyones approval, notably the Dickerson's son: "Several years ago (1999)... I saw a brochure for an obscenely garish house... It was Merrywood, radically altered and for sale for almost $20 million. The red brick had been scrubbed to look fresh and peppy. Additions had been bolted onto each of its sides. The ivy had been torn off. The rolling hill in the backyard had been paved with steps. And a cupola had been added to the center of the roof, in an act of such curious bad taste that I thought it must have dropped there accidentally from a cargo plane"!

Merrywood in the 21st Century
In 1999, the Kays sold Merrywood for $15.5 million to William E. Conway Jr., a founder and managing director of the Carlyle Group investment firm. But, that very same year, Steve Case, Co-Founder of AOL, offered Conway $24.5 million and Merrywood was his - and for the second time, Merrywood had broken the region's property records. Steve and Jean Case lived here with their family until 2018 when Merrywood was placed on the market for a whopping $49.5 million. It was sold that year to the government of Saudi Arabia for $43 million, the most expensive deal in the Washington, D.C. area, to date.

Washington, D.C: A Novel (Narratives of Empire) By Gore Vidal

And They Called It Camelot: A Novel of Jacqueline Bouvier Kennedy Onassis By Stephanie Marie Thornton

Among Those Present: A Reporter's View of Twenty-Five Years in Washington By Nancy Dickerson

The Little Book of Gold: Fundraising for Small (and Very Small) Nonprofits By Eric Hanberg