Built from 1845, as a gift for Mrs Dorothea (Astor) Langdon (1795-1874) from her father, John Jacob Astor, while she was travelling in Europe as their country home (better known today as the Vanderbilt Mansion) was also being rebuilt in Dutchess County. Her new townhouse had a frontage of roughly 257-feet on both Astor Place and Lafayette Place (now Lafayette Street) covering four city lots at the northern most end of Astor Place. Mr Astor built the shell of the mansion and on his daughter's return he gave her $30,000 with which to decorate it. This effectively meant "spare no expense" and the interior decorator, "proceeded to finish it in a style hitherto unknown in the city," at a final cost of $60,000! For that price, it was just as well that the house was noted for its superior, "plaster and stucco ornamentation, and woodwork"....
zoom_in 1 images 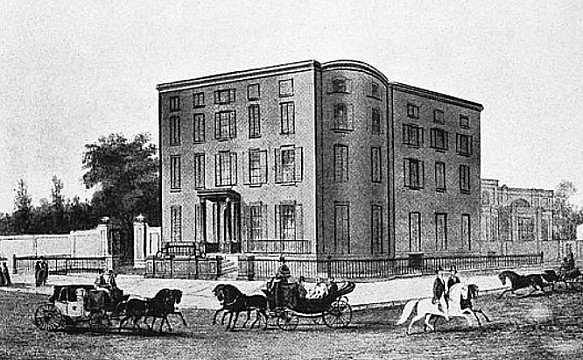 Back in 1812, John Jacob Astor had flown into a rage on hearing that his daughter, Dorothea, had eloped with the dashing and well-bred but non-business-minded Walter Langdon, son of the Governor of New Hampshire. To avoid the animosity at home, the Langdons proceeded to spend much of their time in Europe. But, as the years rolled by, the old lion softened and in an effort to induce his daughter to stay on American soil he first paid $42,000 in 1842 to give them an estate in Hyde Park - where they built what has since become the Vanderbilt Mansion - before making this outlay to provide them with a townhouse equal or surpassing any in elegance that they might prefer in Europe.

The piece-de-resistance of the elegant Langdon House was a beautifully carved mahogany staircase. It was made in England and designed specifically for the house where it was placed at the foot of a large stained-glass window overlooking Astor Place. The reception rooms (drawing room, salon, and ballroom) were all to the left of the main hall, while to the right was found the library, staircase, dining room and offices. The house was surrounded by a high brick wall that enclosed a courtyard garden and a circular carriage drive. The garden featured mature specimen trees and stables to the rear.

The Wilks, the Astor Place Riot, and Demolition

In 1847, Dorothea's husband died and in 1852 she left America for Europe, dying 32-years later at Nice on the Cote-d'Azur. In her absence, the house was occupied by her daughter, Eliza, who in 1843 had married Matthew Wilks. The Wilks' were in residence when the Astor Place Riot boiled over in 1849 and one of their servants was killed while observing the scene from what he had assumed to be the safety of their rooftop. The house was struck nine times by bullets and three pools of blood were found inside the railings.

One of the men caught up in the riots was Sylvester L. Wiley. When he saw another bystander fall after the infantry released its first volley of gunshot into the crowd:

"We tried to get into Mrs Langdon's house, as we did not know how much he was hurt. We knocked at the door, which was opened by a gentleman, who repulsed us as soon as he saw what we wanted; he closed the door as far as he could but the crowd pressed so he could not quite get it closed, he sang out for assistance, when three or four men came from the back door, one of whom - a policeman, I knew him by his star - struck me over the head and knocked my hat off, so that it fell in the hall. I called on the crowd to give way..."

At the end of the riots, one observer commented that, "Mrs Langdon's house looks as if it had withstood a siege". From 1858, the Wilks' divided their time between here and their new summer home, Cruickston Park. By the time Dorothea died in 1874, the area had lost its residential charm to industry and commerce. The following year, the house was torn down and, "the scene of much gayety and many social entertainments" was replaced by commercial buildings while the Wilks moved full-time to Cruickston Park.

Account of the Terrific and Fatal Riot at the New-York Astor Place Opera House By H. M. Ranney. Edited by Pat Pflieger