Completed in 1904, for Edward Collings Knight, Jr. (1863-1936) and his first wife, Clara Waterman Dwight (1862-1910). Clarendon Court is perhaps the only truly English house that just happens to be in America: the design was commissioned for an Englishman in the late 18th century but it was never realised until Trumbauer brought it to life in Newport. However, rather than conjuring up an image of an exceptionally elegant neo-classical mansion, today Clarendon Court often brings to mind the tragedy that befell its former owner, Sunny von Bülow. In 1956, it was featured in the classic movie High Society (1956), and like its neighbor, Miramar, it is one of only a handful of the great Gilded Age mansions at Newport to remain a private residence....
zoom_in 10 images 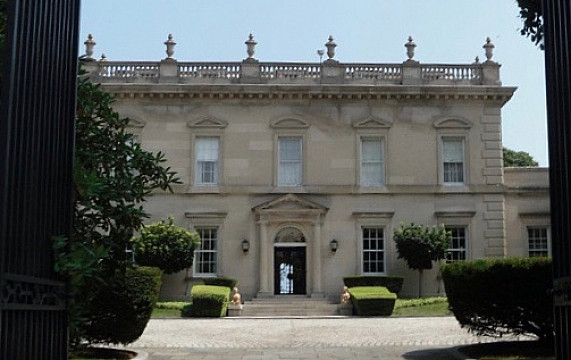 Knight was a native of Philadelphia. His father made a fortune as the owner of a sugar refinery before raking in further profits from the railroad, coal and steamship companies on whose boards he sat. Knight himself did not inherit his father's empirical prowess. He was an amateur artist, and though he followed his father into business he was ill-suited to it and "exhibited more talent at spending money than making it"!

In 1901, Knight purchased an acre off Bellevue Avenue for $40,000 from William Collins Whitney (1841-1904). In 1903, he commissioned Philadelphia's own Horace Trumbauer (1868-1938) to build him a summer home on the plot that overlooked the Narragansett Bay. Six years later, Knight expanded his property when he bought Reef Point next door and demolished it to give him a 7.2-acre oceanfront property with formal gardens.
Claradon Court: England in America

Clarendon Court is an all but identical replica of a fabled early 18th century English mansion, "Hedworth House" at Chester-le-street in Durham. It was commissioned by John Hedworth (1683-1747), M.P., and designed by Colen Campbell (1676-1729), a noted Scottish architect descended from the Campbells of Cawdor Castle. Campbell boasted an impressive résumé having both designed and worked on some of England's finest buildings, including among others Houghton Hall, Burlington House, Stourhead and Greenwich Hospital. But, as for Hedworth, though drawings were made and a color plate was completed, there is no evidence that the house was ever actually built.

Trumbauer found the design to Hedworth in one of Campbell's old books, and except for removing the cupolas over the wings either side of the central block, he reproduced a perfect copy. This excellent example of English neo-classicism in smooth sandstone was closer in style to a late 17th century mansion with its "urn-embellished balustrade". Its loggia, matching rear wings, and heated swimming pool at the back of the house were all later additions. The outbuildings include the 10,000 square foot carriage house and a similarly styled three piece arch centering the wall that protects the gardens from the sea.

Knight named his 11,878 square foot, 20-room mansion "Claradon Court" for his wife, Clara. They hired Jules Allard & Sons of Paris to design the interior in the English 18th century style. Entered via mahogany doors into a marble foyer with a graceful sweeping staircase, the principal interior features of the house survive intact: 18th century fireplaces, marble floors and arched French windows that open up onto the loggia.

The Colfords, Harry Black and the Cassatts

Clara Knight died in 1910 and Edward later moved to "Stonybrook" on Indian Avenue, also designed by Trumbauer. Their only child, Clara Waterman Knight (1887-1924), married Sydney Jones Colford, Jr. (1885-1951) in 1907 and according to The New York Times, "took up their residence in Newport, where they entertained extensively". They divorced in 1920 and Clara Colford left with her two daughters for the French Riviera.

In 1921, the former Mrs Colford caused a stir in New York society when without an announcement nor a formal engagement, she married the well-connected Francis Hunter Potter (1882-1932) in Nice. When she died in 1924, her children kept Claradon Court for six more years before selling it in 1929 to Harry S. Black, of New York. The elusive Harry Black held it for just one year but during the season he leased it out to the railroad heir Robert Kelso Cassatt (1873-1944), of Philadelphia, and his wife Minnie Drexel Fell.

The new owners from 1930 were Maisie Caldwell (1878-1956) and her third husband, Colonel William Hayward (1877-1944), legendary commander of the "Harlem Hellfighters" during World War One. Maisie had inherited a fortune of $50 million from her second husband, the Commodore of the New York Yacht Club, Morton Freeman Plant (1851-1918), a railroad and steamship magnate.

In 1917, Mae was famously remembered for giving her and Morton's city mansion to Pierre Camille Cartier (1878-1964) in exchange for a pearl necklace valued at $1 million: Mae lost the pearls, but the mansion is still the headquarters of Cartier, New York!

Occasionally joining the Haywards at Newport was Mae's son by her first marriage, Philip Morgan Manwaring Plant (1901-1941), who was adopted by - and took the surname of - her second husband. It was for the Philip that the term "Playboy" was first used, coming about during his divorce from Constance Campbell Bennett (1904-1965).

In order to make their summer home 'their own,' the Haywards changed its name to the more formal and English-sounding "Clarendon Court". They remodelled the service wing so that it became one large room - an art gallery - for Mae's collection. Among her paintings were works by Boucher, Watteau, Romney, Gainsborough, Raeburn, Rembrandt, Lawrence and Andrea Del Sarto; many of which are now in the Frick Collection.

Complementing the house perfectly, Mae filled Clarendon with her own existing pieces of Queen Anne and Georgian furniture; Chelsea, Meissen, Royal Doulton and Dresden porcelain; and, the dining room table was dressed with silver cutlery from the period of George I (1660-1727).

The Colonel died in 1944. Ten years later, Mae married her fourth and final husband, John Edward Rovensky (1880-1970), the immensely successful financier who met her playing poker in their mutual club at Palm Beach. Mae died just two years later, leaving Rovensky her Newport home and the remnants of her fortune that had dwindled to just $4 million.

In 1956, Rovensky allowed the entrance gates to be used as the backdrop to a scene in the film High Society (1956), whose lead female role was inspired by the former châtelaine of Ardrossan Mansion. John Rovensky continued to summer there and in 1959 he donated $175,000 to the Preservation Society of Newport County for the purchase of Rovensky Park, apparently in memory of Mae... but with his surname! He died in 1970 and his only child by his first marriage, Jane Ewing Rovensky, sold Clarendon to the von Bülows.

Born Claus Borberg, Claus von Bülow was the son of a Danish playwright disgraced for collaborating with the Nazis during the Second World War. Claus dropped his father's name in favor of his mother's and then added the noble connotation of "von" himself before coming to America and finding work as the personal assistant to Jean Paul Getty (1892-1976). In 1966, he married Martha Crawford (1932-2008), the former Princess von Auersperg who had divorced her first husband just the previous year. Known as "Sunny" she and her mother were worth in excess of $75 million. Her widowed mother summered at Champ Soleil, just a short walk along Bellevue Avenue from Clarendon Court.

Entirely financed by Sunny's money, the couple furnished Clarendon with 18th and 19th century pieces in "exceptional taste". Hiring the landscape architects Innocenti & Webel, they levelled the lawn behind the swimming pool creating a 105-foot uninterrupted view down from the rear of the mansion directly to the ocean.

Sadly, it was for Sunny's misfortune that Clarendon Court sprang to the attention of the public eye in 1980. It was already a well-known fact that her marriage was on the rocks and in 1979 during a family gathering for Christmas she fell into her first coma and was diagnosed with low blood sugar levels, exacerbated by mixing alcohol with medications.

The following Christmas (1980), the same thing happened again, but this time Sunny would never wake up. A hypodermic needle was found in a black bag in Bulow's study and coupled with their maid's testimony he was subsequently charged with her murder, accused of injecting his wife with insulin so he could live at Clarendon on her money with his mistress. His mistress was the actress Alexandra (Moltke) Isles, better known as "Victoria Winters" in Dark Shadows which had been filmed at nearby Seaview Terrace.

In 1982, in a sensational case that gripped the country, Bülow was convicted. But, he appealed in 1985 and was acquitted. His stepchildren then filed a $56 million law suit against him, which was dropped two years later: Bülow agreed to divorce his comatose wife, relinquish all rights to her fortune, leave the country and never to profit from the story. This agreement also allowed his daughter by Sunny (Cosima) to be written back into her grandmother's will. During the trial, Cosima had been at odds with the rest of the family and was disinherited for standing by her father and insisting on his innocence.

Bülow moved to London where he kept a low profile for the rest of his life while Sunny remained in a vegetive state in New York until she eventually passed away in 2008. He was always careful not to profit from the story, knowing he would be sued immediately. But, his lawyer who got him acquitted cashed in again by writing a book on the events that was made into the film Reversal of Fortune starring Jeremy Irons and Glenn Close.

In 1988, family and friends acting on behalf of Sunny sold Clarendon Court for $4.3 million to Patricia and her husband Glenn Randall, an art dealer from Washington D.C. In 2010, Randall's wife passed away and he put the estate on the market for $17.8 million. It was finally sold in 2012 for $13.1 million to Paul G. Roiff, of Boston. Roiff is President of Heath Properties and owns several upmarket restaurants in Boston as well as the XV Beacon hotel. Clarendon Court along with The Orchard and Miramar are among the very few Gilded Age mansions at Newport to have always remained private homes.

Private Newport: At Home and in the Garden By Bettie Bearden Pardee

Morton F. Plant and the Connecticut Shoreline: Philanthropy in the Gilded Age By Gail B. MacDonald

The Cartiers: The Untold Story of the Family Behind the Jewelry Empire By Francesca Cartier Brickell