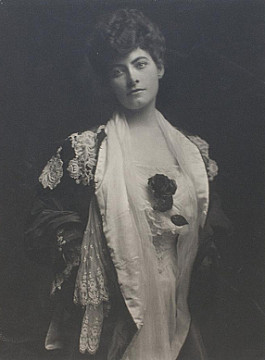 She grew up in New York City, born to one of its wealthiest families, one that Mrs Astor added without question to her "Four Hundred". Her mother's side of the family was notably artistic: her grandfather co-founded the Metropolitan Opera; she was a niece of the celebrated architect Whitney Warren; her favorite uncle was another architect, Lloyd Elliot Warren, Founder of the Beaux-Arts Institute of Design in New York City; and, she was a first cousin of the sculptor Constance Whitney Warren. Her aunt, Harriette Goelet, was the sister-in-law of Ogden Goelet who built Ochre Court.

Edith was an only child. Her parents introduced her to society as a debutante in 1907, but despite a sharp, curious mind and smoldering good looks, she never made it off the shelf. In an age when a young lady was considered to be a spinster by 25-years old, the fact that she wasn't married until she was 33-years old is revealing. Instead, she lived at home with her parents in their 30,000 square foot mansion at 1048 Fifth Avenue. Their house still stands today and is historically referred to as the William Starr Miller House.

At their city mansion, Edith busied herself with "gathering data" and making lists. In 1918, as "E.S. Miller" she published her first book, the very sensible sounding, "Common Sense in the Kitchen". Its basis was to analyze the amount of food consumed in the household at 1048 under three differing situations, termed as: "normal management"; "extravagant management"; and, "unsupervised management". But, she hadn't employed an editor and the book was muddled and lacked any sense of order. It also showed the beginnings of something of an obsession against "grafters and thieves" and those on the "easy swindle".

Three years later (1921), she was married to Almeric Paget, Lord Queenborough, a British politician well-known in American society and the widower of another American heiress, Pauline Payne Whitney. However, Almeric was 26-years her senior and Edith's mother (who was five years his junior) thought the old lord "a philanderer" and cried in her rooms as the wedding took place "quietly" in their Music Room downstairs!

After the wedding, Lord and Lady Queenborough moved to England and while living in London Edith was tasked with finding them a country home. They bought Camfield Place some twenty miles north of London and Edith redesigned the interiors herself. But, whereas Camfield had inspired the children's author Beatrix Potter (and later Barbara Cartland), while living here with their three children both Almeric and Edith's views became increasingly pro-fascist and they became obsessed with astrology too.

At the same time as coming to England, Edith read "Le Diable au XIXe siècle (The Devil in the 19th Century)" written by 'Dr Bataille' (Leo Taxil). She took it entirely to heart and then determined to understand occult philosophy and expose the secret, satanic societies (in her mind masonry, judaism etc.) that she supposed were controlling society as a whole while advancing "the agenda of the super-rich". Her investigation culminated in the book for which she is remembered today: "The Occult Theocrasy," dedicated to her late uncle Lloyd E. Warren, an architect formerly of Paris, "who first guided me in this work".

Though not as widely read nor publicized, her book was in many ways the "Da Vinci Code" of its day. In it, she sometimes referred to herself as "the victim" and wrote in the third person: "Irrefutable evidence of a particular example of underworld tyranny has come into my possession. The victim's guilt was her reluctance to step from virtue into the mire of evil which surrounded her. Moreover, she was intolerant of evil and sought to oppose and destroy it. The case of her persecution at the hands of her foes is complete. She belonged to what is termed Society as did also some of the other actors in this bewildering drama... So many Jekylls and Hydes stalk about unsuspectingly in our midst!"

Edith's marriage, in the meantime, had fallen to the wayside and citing "cruelty" she and Almeric were divorced in 1932. Now, for those of you who like a conspiracy theory: after her divorce she left for Paris where she died, according to some, "under suspicious circumstances". Nonetheless, that same year (1933), her book was published posthumously; and, in case you'd wondered about her uncle who got her into all this? He also came to a sticky end, in Paris, "sleep-walking" out of his 6th floor window...

The Debutante: A Novel By Kathleen Tessaro

Beatrix Potter: A Life in Nature By Linda Lear. Foreword by James Rebanks