Completed in 1914, for William Starr Miller II (1856-1935) and his wife, Edith Caroline Warren (1866-1944). Inspired by early 17th century Paris, it was designed by the celebrated New York firm of Carrère & Hastings, perhaps as a nod to Hastings' recently deceased partner. Described by the New York Landmarks Commission as, “one of the finest mansions on Fifth Avenue,” this excellent example of Beaux-Arts architecture stands at the corner of East 86th Street. Mrs Miller died in 1944 and Mrs Grace Vanderbilt then downsized here from 640 Fifth Avenue, jokingly referring to the mansion as "the Gardener's Cottage"! One of the 20th centuries most intriguing conspiracy theorists was married here and today it is the Neue Galerie....
zoom_in 20 images 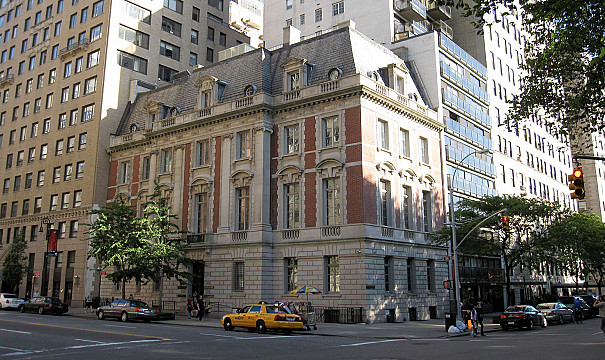 William Starr Miller II was ostensibly a lawyer, but he was also a successful investor and real estate developer both in Manhattan and Rhinebeck. His father had left Connecticut for Charleston where he made a fortune in cotton, but he became so reviled by slavery that in the early 1840s he closed down his business and returned north. Continuing as a merchant in New York, he had a home on Fifth Avenue and in Rhinebeck. William was named for his uncle, William Starr Miller (1793-1854), U.S. Congressman from New York.

Mrs Edith Miller was the sister of the celebrated architect Whitney Warren, of the firm Warren & Wetmore, who the Millers commissioned to build both their Newport cottage and their country home. However, when it came to building their city mansion they turned to Carrère & Hastings, possibly at the suggestion of her lesser known, shorter-lived brother, architect Lloyd Warren, Founder of New York's Beaux-Arts Institute of Design.

It is tempting to think that Edith's home contained some of the curios collected by her childless uncle, Stephen Whitney Phoenix, the well-known traveller and Egyptologist. But, either way, her home certainly did contain her valuable collection of jewellery. In 1902, it was reported that Mrs Miller's jewellery collection was worth $700,000 and at that time there were only 15 women in New York with more valuable collections!

John Merven Carrère and Thomas Hastings had both studied Beaux-Arts architecture in Paris, but they only met later in New York when working for McKim, Mead & White. Tragically, Carrère was killed in a car accident in 1911 so when the Millers approached the firm the following year, it was just Hastings who led the design. Perhaps nostalgically, the Miller house was inspired by the Paris he and Carrère had known and loved: the Place des Voges (formerly the Place Royale) in Le Marais was finished in 1612 (precisely three hundred years before) to celebrate King Louis XIII's engagement to Anne of Austria.

The 50-by-100-foot house took 2-years to build and was complete by early 1914. As it neared completion, The New York Times praised its, "dignity and simplicity" opposed to, "some of the excruciatingly ornate creations on the avenue"! The reporter admired the "cheerful touch of color" and predicted it to be, "of more than ordinary importance". It was run by eleven servants, including one butler, two footmen, and a lady’s maid.

The house stands four stories high with a basement and an attic. Each main floor had its own hall which led to three principal rooms: on the ground floor, the entrance hall led to the oak-panelled Library, a "Telephone Room," and the Dining Room with a 22-foot oblong table of carved walnut. The second floor contained the ballroom, oak-panelled Louis XVI Drawing Room and the Music Room - later called the "Tapestry Room," for its three 17th-century Flemish tapestries depicting various classical scenes and figures. There were three bedrooms on the third floor including Mrs Miller's Louis XVI Bedroom and Boudoir; and, the fourth floor had a studio and two further bedrooms for servants.

In 1921, in the marble-pillared Music Room, the Miller's only daughter, the beautiful if  eccentric Edith, was "quietly" married to the British politician Almeric Paget, Lord Queenborough. Her charming old husband was just that "old," he was a widower, 26-years her senior which explains part of the decided lack of enthusiasm surrounding the match. Mrs Miller had branded the old Lord "a philanderer" and was said to have cried in her rooms upstairs during the nuptials! Almeric was previously married to another American heiress, Pauline Payne Whitney, whose brother was then living at the exquisite Whitney Mansion with his wife, Gertrude Vanderbilt, further south down the Avenue.

Lord and Lady Queenborough moved to England and lived between London and Camfield Place, once the beloved childhood home of the children's author, Beatrix Potter. Perhaps unsurprisingly, their marriage did not work out. Edith cited "cruelty," but having gone from publishing "Common Sense in the Kitchen" in 1918, she (and her husband) developed Fascist sympathies and she became a vehemently anti-masonic conspiracy theorist authoring the still controversial "Occult Theocrasy" - the "Da Vinci Code" of its day! She died in Paris, the year after her divorce, and some say... "in mysterious circumstances"!

Mrs Miller outlived both her husband and her daughter and died at the house in 1944. By order of her executor (her grandnephew, George Henry Warren III), its contents that were unwanted by various family members (which was most of it) were put up for auction, spread over four days. It was a long and impressive catalogue that included Chinese Porcelain & Pottery; Japanese Cloisonné Enamels; a bronze mantel clock from Louis XV; 17th century Flemish tapestries; European paintings from the 17th to 19th centuries; 17th century silk table covers; a 7-foot Chinese silk and gold embroidered satin hanging; books on French architecture; a rose silk damask chaise longue; crimson velvet & satin damask chairs; and, a profusion of furniture in mahogany, rosewood, walnut, oak, tulipwood etc.

By the Second World War, the Gilded Age was over, Fifth Avenue had all but lost its old-world grandeur and houses like the Whitney Mansion were falling two-a-dime to the wrecking ball. But, if anyone was still in the market for a mansion on Fifth Avenue - and could afford it - then Mrs Grace Vanderbilt was near the top of the list. Mrs Miller was barely in her casket before $300,000 had changed hands and the mansion was hers.

Grace was born and bred on Fifth Avenue, the youngest of the five children of Richard Thornton Wilson, known as "the marrying Wilsons" for their habit of marrying rather well. Though Grace certainly married well, hers was not one of wedding bells and confetti - she eloped with "Neily" Vanderbilt, second son of the man who built The Breakers. The union divided the family and by going against the wishes of his father, Neily was willed just $1.5 million (topped up with another $6 million by his brother Alfred), but it took another 27-years before his mother made her peace with him! Grace may not have been welcome at The Breakers, but no matter, her sister reigned supreme at Ochre Court!

In 1914, by virtue of being the next male in line, Neily inherited 640 Fifth Avenue (one side of the Vanderbilt Triple Palace) from his uncle, George Washington Vanderbilt II, who is best remembered for being the man - and the money - behind Biltmore. When Grace first stepped foot inside, she exclaimed, "why, it's the Black Hole of Calcutta, I couldn't possibly live here!" She did, after spending $500,000 to make it feel like 'home' and fast-forward three decades she had become so accustomed to plus-sized living that she now jokingly referred to her new home at 1048 Fifth Avenue as "the gardener's cottage"!

Showing spirit akin to another Vanderbilt pariah (Alva), rather than shrink under the glare of disapproval, Grace proved a force to be reckoned with. By the time THE Mrs Astor died in 1908, it was apparent that she had outdone all would-be contenders and now stood as the de facto leader of New York society. Neily had died in 1942 which precipitated her move to 1048 Fifth. It may not have been on the same scale, nor with the quite same vigor, but she still had a role to fulfil and Mrs Vanderbilt continued to entertain accordingly!

Grace Vanderbilt died in the house in 1953. Two years later, it was purchased by the YIVO Institute for Jewish Research. In a bid to save money, rather than strip out the oak-panelling, they simply boarded the walls up, unwittingly preserving the original features.

In 1994, former mayoral candidate and billionaire Ronald Lauder purchased the mansion for an undisclosed amount with his old friend Serge Sabarsky, the noted art dealer and collector. Lauder is an heir to the Estée Lauder Companies and President of the World Jewish Congress. Following a lengthy renovation, in 2001 they opened the mansion as the Neue Gallerie, a museum dedicated to German and Austrian Expressionist art.

The Vanderbilt Women: Dynasty of Wealth, Glamour and Tragedy By Clarice Stasz

Women of Means: The Fascinating Biographies of Royals, Heiresses, Eccentrics and Other Poor Little Rich Girls By Marlene Wagman-Geller

The Architecture of Warren & Wetmore By Peter Pennoyer & Anne Walker. Foreword by Robert A. M. Stern

Occult Paris: The Lost Magic of the Belle Époque By Tobias Churton

A Season of Splendor: The Court of Mrs. Astor in Gilded Age New York By Greg King

Masterworks from the Neue Galerie New York By Renee Price