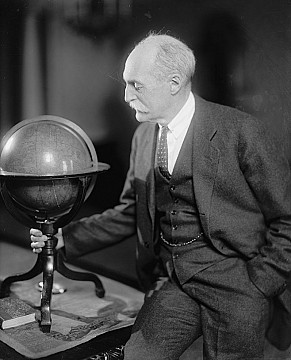 He was born at Simsbury House, Connecticut, the summer home of his maternal grandfather, Amos R. Eno. He was given his first name for his parents' friend, the artist Sanford Robinson Gifford, one of the leading members of the Hudson River School. He was tutored at home in his family's red brick house at Gramercy Park, New York, before entering Phillips Exeter Academy and graduating from Yale (1885). Through his father's influence he became interested in forestry and studied the subject in Europe before returning to America in 1890 for practical experience. In 1892, his father's friend, Frederick Law Olmsted, recommended him to George Vanderbilt for the position of forest manager at Biltmore. By 1898, he was the dynamic new Head of the Division of Forestry in the U.S. Department of Agriculture who increased the number of employees from 60 to 500 and established the Society of American Foresters.

In 1905, Pinchot and his intimate friend President Theodore Roosevelt persuaded Congress to establish the U.S. Forest Service, of which he was made chief. Despite heavy opposition, they succeeded in creating 16-million acres of National Forest and continued to find ways to protect public land from private development. In 1910, President Taft eventually dismissed him, but Pinchot worked hard behind the scenes to ensure that his ally Henry S. Graves (a fellow Bonesman from Yale) was the man chosen to succeed him.

In 1910, Pinchot was among the founders of the Progressive Party that sought to have Theodore Roosevelt re-elected in 1912. They were unsuccessful and so was Pinchot in his attempt to be nominated to the U.S. Senate for Pennsylvania. When Roosevelt returned to the Republican Party, so too did Pinchot. In 1923, he was elected to his first term as Governor of Pennsylvania. He focused on balancing the state budget and turned a $32-million deficit into a $6.7-million surplus, and in 1924, his name was mentioned as a possible candidate to succeed President Harding. He was elected as Governor of Pennsylvania for a second term in 1931, helping to expand state parks and surface rural roads ("Pinchot Roads"). After 1935, he would not hold public office again, but he continued his successful campaign to prevent the transfer of the Forest Service to the Department of the Interior. During and after World War II, he advocated for conservation to be a part of the mission of the United Nations, but that didn't happen until 1972.

His first love was Laura Houghteling to whom he was engaged while working at Biltmore but she died prematurely in 1894. During the 1912 Presidential Campaign he met Cornelia Bryce, daughter of U.S. Congressman Lloyd Bryce, to whom he was married in 1914. She was a noted Suffragist and while she unsuccessfully attempted to win a seat in Congress, she became known as, “one of the most politically active first ladies in the history of Pennsylvania". They had one child, co-founder the Natural Resources Defense Council.

The Gifford Pinchot National Forest in Washington and the Gifford Pinchot State Park in Lewisberry, Pennsylvania, are named for him, as is Pinchot Hall at Penn State University. The Pinchot Sycamore at Simsbury is the largest tree in his native state of Connecticut and in the Kings Canyon National Park in California there is both a trail and a peak named for him. His summer home in Pennsylvania, Grey Towers National Historic Site, is the only National Historic Landmark operated by the U.S. Forest Service. While he is generally considered the "Father of American Conservation," lawyers representing Columbia University branded him and his brother "Bequest Grabbers" when they succeeded in defying their charitable uncle's will concerning 32 Fifth Avenue, N.Y.C.

Gifford Pinchot and the First Foresters By Bibi Gaston

The Training of a Forester By Gifford Pinchot

On Strawberry Hill: The Transcendent Love of Gifford Pinchot and Laura Houghteling By Paula Ivaska Robbins