Completed in 1892, for Whitelaw Reid (1837-1912), and his wife, Elisabeth Mills (1857-1931). They rebuilt the original castle put up in 1864 by the "Stagecoach King," Ben Holladay. He created his own corner of the Wild West here, and it was the only estate on the East Coast where guests were invited on Buffalo hunts! The King of Thailand convalesced here and local legend has it that the sight of nuns filing over the slope of the Quad inspired the most famous song in the musical, "The Sound of Music". Today, Reid Hall is the beating heart of the 100-acre campus of Manhattanville College....
zoom_in 20 images 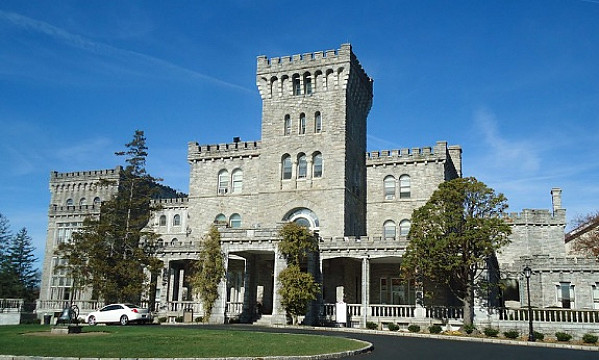 In 1695, John Harrison, a Quaker, of Flushing, Queen's County, purchased a tract of land nine miles long by three wide from the Siwonay Indians for £40. This became known as "Harrison's Purchase" and that same year he leased 20-acres to the Haviland family. Fast forward 200-odd years to 1864 and various members of the Haviland family had sold up to the "Stagecoach King" Ben Holladay (1819-1887), to give him an estate of 1,000-acres.

The Wild West in Westchester

Ben Holladay bought the estate for his wife, Ann, whose parents roundly objected to her choice of husband; and, so they might: Holladay was invariably described as, "illiterate, coarse, boastful, false, and cunning... and completely unscrupulous". When a bachelor in San Francisco he bought a new house which, without batting an eyelid to what the neighbors might think, he promptly filled with "a harem of high class prostitutes"!

Holladay named his new estate "Ophir Farm" for the Ophir Mine in Virginia City, Nevada, that he won in a game of poker. At the time of building, Holladay was at his peak and said to be worth $10 million while earning a further $1,500 every day. The castle he built for his wife closely resembles the one seen here today. The central tower rose a full 6-stories and among its 84-rooms was the dining room capable of seating 150 guests. It cost him $174,000 to build it - plus 18 outbuildings - and he then spent a further $700,000 on decoration and landscaping. On completion, Ophir was, "admired throughout the state".

Before coming to New York, Holladay had been living in Oregon and he was determined to bring the wildness and romance of the west to New York: He imported buffalo from Wyoming and elk from Colorado; he stocked the streams with speckled trout; and, he planted all the trees, flora and fauna that one would expect to find on a ranch out west.  His was the only estate on the East Coast where guests could partake in a Buffalo hunt!

In the 1870s, the wheels fell off the "Stagecoach King". The financial crash of 1873 saw his fortune turn to dust and in a cruel twist of fate that same year he lost his wife who was closely followed to her grave by their two daughters, both of whom had married into French aristocracy. By 1876, in severely reduced circumstances, the former king returned to Portland, Oregon, and his corner of the Wild West in Westchester was put up for sale.

Out Goes the Outlaw, in Comes Whitelaw

Orphir remained on the market until 1883 when it was purchased by the shipbuilder John Roach (1815-1887) who kept a summer home nearby. However, he never took residence as he was waiting to clinch a deal before planning to remodel it. In the meantime, he became terminally ill and by the time he died in 1887 his business was in receivership. The following year, the estate was won at auction by the Press Baron Whitelaw Reid.

Whitelaw Reid (1837-1912) rose from being a war correspondent during the Civil War to editor then owner of The New York Tribune from 1872 until his death. In 1902, he was appointed Special Ambassador to the Court of St. James for the Coronation of King Edward VII. Three years later, he was made Ambassador and held that position until his death in 1912. His wife, Elisabeth, was the daughter of Darius Ogden Mills who went from Westchester to California in the Gold Rush and came back with a $36 million fortune. Her brother, Ogden, maintained five residences including the Mills Mansion at Staatsburgh.

The Reids rejuvenated and remodelled the existing mansion, refurnishing it and fitting it out with all the latest technology: it was the first home in the county to boast both a telephone and electricity. But, it came at a cost: in July, 1888, within just weeks of moving in, faulty wiring sparked a fire that ravished the mansion in just a matter of hours. When it was finally put out, all that remained were the granite walls and foundations.

Undismayed, the Reids set about building a new and improved version of the original castle over the same footprint as Holladay's and with rough cut, locally quarried granite. They employed four architects, but it is McKim, Mead & White who are generally accredited with the overall result while Frederick Law Olmstead landscaped the gardens with trees and shrubs imported from England and France. The castle, which they now renamed "Ophir Hall," was re-opened to great fanfare in the summer of 1892.

In the same year that Ophir was unveiled to society, President Benjamin Harrison (1833-1901) asked Reid to be his vice-presidential nominee. On coming to Ophir, the President gave a speech to the people of Westchester from the south pavilion and held a reception in the marble hall, but they lost the presidential race to Grover Cleveland by just 4%.

The imposing entrance hall combines yellow marble from North Africa and pink marble from Georgia. The colors are brought to life by the light that bathes the room from the the stained glass window over the central staircase. Having just completed a stint in France as the U.S. Ambassador, it was perhaps unsurprising that the Reid's incorporated some very literal French elements into their new home: two of the principal reception rooms to the right of the hall were salvaged from the Chateau de Villennes.

From 1902, Reid began his term as Ambassador to the United Kingdom, leasing Wrest Park and Dorchester House in London which became the unofficial American Embassy. Nonetheless, he continued to improve Ophir by adding a new wing, and just as they had incorporated French rooms before, they now introduced an English feel: the Jacobean corridor was lined with pastoral scenes by J.M.W. Turner and portraits by Gainsborough; and, the bookcases and panelling in the Tudor-style Great Library were salvaged from England with cloister medallions and 59-windows from Salisbury Church.

As Reid was mostly absent during this time, he relied heavily on employees such as Mr Logan, the groundskeeper to oversee the improvements being made to the estate. He also collaborated closely with Hamilton Twombly of Florham, swapping ideas and making use of one another's staff. For example, Reid borrowed Florham's farm manager, Edward Burnett, to oversee the construction of Ophir's dairy. Relied upon by the Vanderbilts too, Burnett was not your average farmer, he was a graduate of Harvard who made his home at the historic Elmwood and went on to represent Massachusetts in Congress.

Whitelaw Reid never saw the new wing. He died in England in the same year that it was finished. He was known for entertaining on a lavish scale, but professionally he had been under increasing stress as war loomed in Europe. His widow returned to New York and continued to divide her time between Ophir, Manhattan, the Adirondacks and Millbrae. She wasn't lonely as her son, Ogden, kept the house (Ophir Cottage) opposite the castle.

The King of Siam, and Sayonara to the Reids

The Reids rubbed shoulders with the biggest names across every sphere of society in all corners of the world. When the King of Siam (Thailand) visited America in 1931 for delicate eye surgery, Elisabeth converted one of the bedrooms into an operating room and leant him her home for the procedure, and the necessary rest period that followed. That summer, the Arts & Decoration magazine ran a typically gushing feature on the house:

Mrs. Reid’s home is a repository for more precious and varied works of art than any other place of its period in the country. Built in the manner of an old world castle, it is surrounded by a vast estate planted with a rich dignity and including in its many interests a nine-hole golf course.

In gratitude for their stay, the King and Queen gave Elisabeth, "a large marble mantel carved with water buffalo, rice fields and other symbols of Siam," that can still be seen in the east Library. But, she died only months later while staying with her daughter, Lady Jean Ward, on the French Riviera. Ogden inherited the estate but preferred to remain at his cottage across the street and eventually put it up for sale in 1947.

"The Hills are Alive..." at Manhattanville College

In 1949, Manhattanville College of the Sacred Heart paid $500,000 for the castle and 250-acres, to expand their existing campus. Within two years, it became the center of their operations, although it was not until 1966 that it fully transformed into the private liberal arts college that is Manhattanville College today. In 1959, the composer of "The Sound of Music", Richard Rodgers (1902-1979), required an authentic rendition of "Dixit Dominus" for the opening scene of the movie. He came to Manhattanville to record the nuns and according to popular local legend, when he saw them traversing the gentle slope of the Quad, he was inspired to write, “The hills are alive with the sound of music”!

The Women in the Castle: A Novel By Jessica Shattuck

Shot All to Hell: Bad Ass Outlaws, Gunfighters, and Law Men of the Old West By Nick Vulich

The Last Buffalo Hunt and Other Stories: Adventures in the Great American Outdoors By J.I. Merritt