Dating back to the late 12th century, the oldest parts of the existing castle, the keep and inner ward, were built by the Norman de Hawey family. In 1925, while building Hearst Castle in California, "the most luxurious estate ever built," the American media magnate satirised by Orson Welles in "Citizen Kane," William Randolph Hearst (1863-1951), saw St. Donat's Castle advertised for sale in a magazine and bought it on the spot. In addition to his castle-within-a-block in Manhattan, Hearst's Clarendon, St Donat's came complete with 800 years of history, a moat, drawbridge, and ghosts....
zoom_in 16 images 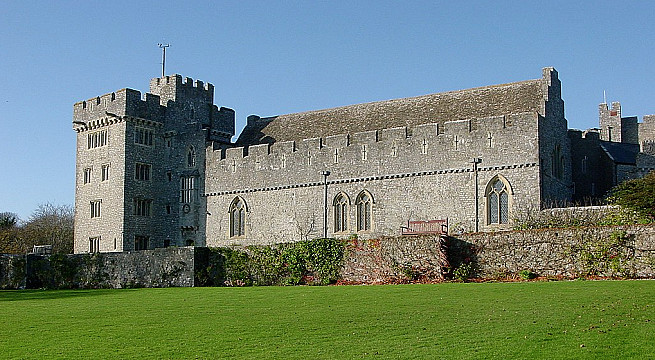 In 1310, St. Donat's was conveyed to Sir Peter Stradling (1285-1357) on his marriage to its heiress, Joan de Hawey (1295-1364). It continued in the Stradling family until 1738 when Sir Thomas Stradling was killed in a duel in France and his friend, Sir John Tyrwhitt, with whom he was travelling - and to whom Stradling had apparently sworn his estates should he die prematurely - then took possession. The Tyrwhitt-Drake family sold it in 1862 to John Whitlock Nicholl Carne (1817-1887) who spent more than £30,000 restoring 42 of the 70 rooms which was met with mixed opinions. In 1902, his eldest surviving son sold it to Morgan Stuart Williams (1846-1909) who owned several nearby coal mines and claimed descent from King Arthur. He continued the ongoing restoration works to universal acclamation and filled it with his collection of antique arms and armor but died in 1909.

Morgan's son, Godfrey, was thought not to have shared his father's passion for St. Donat's, apparently because of its ghosts - one in particular had a tendency to let its presence be known most vociferously on stormy nights - and despite an exorcism recounted in Lord Halifax's Ghost Book it was the castle's living occupants who left!

Godfrey put the castle and 123-acres up for sale in 1921. The following year, it was purchased by Richard Edmunds Pennoyer (1885-1968), an American diplomat predominantly brought up in California who followed in the footsteps of W. Bayard Cutting Jr. by marrying a titled Englishwoman - the Dowager Countess of Shrewsbury - bucking the trend for English noblemen marrying American women of wealth. Pennoyer's brother didn't marry too shabbily either when he was wed to a daughter of J.P. Morgan Jr.

Perhaps it was the ghosts again, as after just three years the Pennoyers put the castle back on the market and it now came onto the radar of William Randoph Hearst. In August, 1925, he wired Alice Head in London who oversaw his European businesses: "Want buy castle in England. St Donat's perhaps satisfactory at proper price. See if you can get right price on St Donat's or any other equally good". Two months later, the castle - complete with its authentic medieval tombs, moat, portcullis and dungeons, not to mention its ghosts - now belonged to Hearst, or more accurately 'The National Magazine Company'.

William Randolph Hearst was a media magnate with an insatiable obsession for antiques. A hoarder with limitless pockets, having already filled all 5-stories of Hearst's Clarendon in Manhattan, Hearst Castle too was awash with crates stuffed full of antiques, not to mention entire rooms that had been boxed up, and even an 11th century monastery! On top of that, his 5-story warehouse in the Bronx - operated by a permanent staff of 30 and which occupied an entire city block - was also getting crowded. Buying a third, authentic castle seemed the next logical step. It would also be suitably out of the public eye where he could entertain friends and luminaries with his mistress, Marion; and, to keep his wife happy, in 1927 he bought her his fourth castle, Beacon Towers.

Hearst paid £27,000 for St Donats and then proceeded to spend a further £280,000 (roughly $1.3 million) on its redevelopment - still a mere splash in the ocean compared to what he was spending on Hearst Castle back in California. He hired Sir Charles Allom to oversee his new project as both architect and interior designer. Allom had received a knighthood in 1913 for his work at Buckingham Palace and when Hearst hired him, he had recently finished working on "America's Versailles," Whitemarsh Hall.

In 1928, Hearst's busy schedule allowed him just one day to walk through the castle with Allom. On returning to America, he wrote a 25-page letter detailing what he wanted done and despite just that one visit, Alice Head recalled, "he was able to instruct Sir Charles from California, to make comments and suggestions on the blueprints that we submitted, and apparently he carried in his memory a perfect picture of the layout of the interior".

In contrast to Hearst Castle which was built with an eclectic mix of mainly Mediterranean, but inclusive of all styles and periods, the additions to St. Donat's were either English or French, true to period (circa 1300 to 1550 when the castle took shape as seen today), and all superbly amalgamated by Charles Allom. However, Hearst's redevelopment that has certainly stood the test of time is still generally disparaged as, "rapid and ruthless".

Having restored the exterior and connected electricity and mains water, Hearst ordered Allom to demolish much of the work done in the Edwardian style by Morgan Williams' architects, Bodley & Garner, on the premise that is was not authentic enough. However, the ancient bedrooms at St Donats were numerous, small, dark, and mostly opened up onto one another. Hearst again ordered Allom to bring them into the 20th century by joining many of these smaller rooms together to create spacious, private guest suites, and in the process dozens of new - inauthentic, marble - bathrooms were also added.

Hearst retained all the original gardens - including the magnificent Tudor garden laid out by the Stradling family - but again, to give it some 20th century luxury, he built a castellated promontory overlooking the sea centered by the 150-by-50 foot swimming pool fed by filtered sea water. He also built a, "picturesque old cottage" fitted out with dressing rooms and bathrooms; and, to the grounds, added two tennis courts and a croquet lawn.

Almost all of the fixtures, features and fittings that were resurrected within Hearst's various homes had been transported from European castles, chateaux etc., normally slated for demolition - this was common practice and Hearst was certainly not alone in that era. But, through a combination of his mania for anything 'of age' and his willingness to pay, antique dealers saw an opportunity to turn a quick buck and began offering him (and notably the English 8th Earl of Berkeley who shared a similar voracity to Hearst) features from buildings that were not wholly in a state of disrepair nor slated for demolition.

Four of the principal rooms redeveloped by Hearst were: (1) 'The Banqueting Hall' with a medieval fireplace from Beauvais displaying Valois arms; windows from Bradenstoke Priory; and, a Gothic Screen from a house that was demolished in Bridgwater, Somerset (2) 'The Dining Hall' features an early 16th century ornate, gilded and vaulted ceiling made by Flemish craftsmen that was "disgracefully removed" from the nave at St. Botolph's Church in Boston, Lincolnshire. It also features six transom windows and, a late medieval French, hooded, fireplace displaying Fleurs-de-Lys (3) 'The Breakfast Room' adjacent to the Banqueting Hall shared part of the ceiling from St. Botolph's and also features "an exquisite" fireplace dated circa 1514 from Bradenstoke (4) 'The Bradenstoke Hall' was built specifically for Hearst between two curtain walls and is covered by the early 14th century roof controversially removed from the tithe barn at Bradenstoke. It also has three contemporary windows and two huge 16th century French fireplaces.

Hearst's greatest haul for St Donat's was from Bradenstoke Priory and its various outbuildings in Wiltshire. However, after it was stripped, locals cottoned on to what was happening and not only was there public outcry but questions were then raised in Parliament as to whether there should be a ban on Britain's architectural treasures being exported to the States. The Society for the Protection of Ancient Buildings (SPAB) were so enraged that they even ran a poster campaign on the London Underground against Hearst, the words of which had to be blacked out when they were deemed libellous. Things did however simmer down once the SPAB realized that what had been taken from Bradenstoke had been kept in Britain and indeed they not only thanked Mr Hearst, but admitted, "this damage to our heritage is more the result of the action of our own people (greedy antique dealers) than that of citizens of the United States of America".

In total, over their 12-years here, Hearst and his mistress spent roughly four months at St Donats, sometimes starting and always ending their summer tour of Europe at the castle. Marion recalled, "we'd stay as long as we possibly could". Their guests (who frequently came down to the local pub for a drink) were as dazzling to the locals as the castle itself: Hollywood stars Charlie Chaplin, Douglas Fairbanks, Errol Flynn and Clark Gable enjoyed time here as well as Prime Ministers Sir Winston Churchill and Sir David Lloyd George, who held an event here to promote Welsh heritage dressed up in medieval costume! A young JFK also came to stay here with his parents when his father was U.S. Ambassador. Opinions differ on which of Hearst's castles the poet George Bernard Shaw was talking about when he said, "it was the place God would have built - if he had the money". He was a guest in both castles but was almost certainly talking about California's Hearst Castle.

By 1937, the Great Depression had cast its shadow over the Hearst Corporation. By court mandate, the reins were taken from 'the chief' and St Donats Castle - and even his mistress' jewellery - were among the many assets sold to cover his debts. Despite never recovering the prosperity it had enjoyed before 1929, when Hearst died in 1951 the Hearst Corporation (continued by his sons and that still survives today) was worth $3.1 billion.

In 1960, the castle was purchased by a son of Sir Antonin Besse (1877-1951) whose substantial donation to Oxford University allowed for the creation of St. Anthony's College. Following in his father's footsteps, Besse Jr. gifted St. Donat's to the trustees of Atlantic College, becoming the home of the first of three United World Colleges, whose mission is to, "make education a force to unite people, nations, and cultures for peace and a sustainable future". The castle continues as the home of Atlantic College today.

The Times We Had By Marion Davis